COVID-19 Resources
AMITIZA 8 mcg twice daily was approved by the FDA in April 2008 for the treatment of Irritable Bowel Syndrome with Constipation in women ≥ 18 years old.

Irritable bowel syndrome (IBS) is a functional gastrointestinal disorder, generally defined as a group of symptoms resulting from changes in bowel function without intestinal structural or biochemical abnormalities.1 Symptoms of IBS include abdominal discomfort, bloating, and altered bowel habits, which can include diarrhea, constipation, or alternating diarrhea and constipation.1

IBS has been further classified into subtypes according to stool patterns. IBS with constipation, or IBSC, is characterized by hard or lumpy stools 25% of the time or more, and loose or watery stools less than 25% of the time.2 Other subtypes of IBS include IBS with diarrhea (IBS-D) and IBS with alternating diarrhea and constipation (IBS-A).

The prevalence of IBS in North America is approximately 10%-15%; of these patients, about 20% suffer from IBS-C.1,3

The diagnosis of IBS-C is made after a complete medical history is obtained and physical examination is performed. IBS-C has no biochemical or structural abnormalities associated with it, so there are no specific tests that can confirm the diagnosis. However, it can be easily diagnosed in the doctor’s office without additional testing.4 According to the American College of Gastroenterology, there is no need to perform routine sigmoidoscopy; colonoscopy; barium enema; stool tests for occult blood, ova and parasite or culture; or thyroid function tests in patients with IBS-C complaints who have no "alarm symptoms."1 Alarm symptoms include items such as blood in the stool, a greater than 10-pound weight loss, family history of colon cancer, recurring fever, anemia, or chronic severe diarrhea.

Several symptom-based criteria have been used to diagnose IBS-C, including the Manning Criteria and the ROME Criteria. These criteria are most useful for standardizing enrollment of patients into clinical trials, and less useful for clinicians in their clinical practice decisions about diagnosis and treatment of IBS-C.5 Identification of IBS-C can be made if abdominal pain or discomfort is present over at least 6 months and is active within the past 3 months, with 2 or more of the following: 1) relieved with defecation; 2) onset associated with a change in frequency of stool; and 3) onset associated with a change in form (appearance) of stool. Patients can be sub-typed as having IBS-C if they also experience 2 of 3 of the following: 1) <3 spontaneous bowel movements per week, 2) >25% hard stools, and 3) > 25% spontaneous bowel movements associated with straining.2

The goal of treatment is to improve symptoms of IBS-C such as abdominal discomfort, bloating, and constipation.

The general approach to the treatment of IBS-C depends in large part on the type of symptoms the patient is experiencing and their severity. Some patients with mild symptoms may find a slow increase in dietary fiber, a healthy amount of exercise and restful sleep, and education about IBS-C are adequate to improve their condition.5 Patients whose lives are significantly affected by symptoms typically require both lifestyle changes and drug therapy to manage their IBS-C.

Several categories of drugs have been used to treat IBS-C symptoms, including bulk-forming, stimulant, and osmotic laxatives as well as stool softeners and lubricants. These drugs are not indicated or proven to be effective in the relief of global symptoms. Agents such as psyllium, methylcellulose, calcium polycarbophil, lactulose, sorbitol, polyethylene glycol, and magnesium hydroxide may be effective for constipation, but treatment of IBS-C should be aimed at relieving global symptoms.1,2 Antispasmodics such as hyoscyamine and dicyclomine have been studied in patients with IBS-C, but there are insufficient data to recommend these agents for global symptom control.1 Even probiotics have been tried in IBS-C patients to decrease abdominal pain and bloating, but none of these agents have been proven effective and safe for chronic use in treating the global symptoms of IBS-C.

Zelnorm® (tegaserod maleate), a 5-HT4 (serotonin) receptor agonist used to decrease transit time and increase intestinal secretion in women with IBS-C, was until recently available only under a restricted-access program due to its potential for increasing the chance of heart attack, stroke, and worsening heart chest pain that could lead to a heart attack.6 This restricted-access program was closed April 2, 2008, making this drug currently unavailable for general use, except for as an emergency investigational new drug (IND) application option available through the FDA.7

AMITIZA 8 mcg twice daily received approval by the FDA for the treatment of IBS-C in women ≥ 18 years old.

Lubiprostone activates chloride channels (ClC-2) in the apical (luminal) membrane of the gastrointestinal epithelium, thereby enhancing the secretion of a chloride-rich intestinal fluid without altering serum electrolyte levels. This activity results in increased motility in the intestine and facilitates the passage of stool.8

AMITIZA 8 mcg, 16 mcg, and 24 mcg, twice daily, were studied in a dose-finding, double-blinded, randomized, placebo-controlled Phase 2 study of 195 adult patients with IBS-C. The primary endpoint was a change from baseline in abdominal discomfort or pain during the first treatment month.9 Given the favorable combination of efficacy and safety profiles seen with the 8 mcg twice daily dose, this dose was chosen for Phase 3 evaluation.

AMITIZA 8 mcg twice daily was studied in 2 double-blinded, placebo-controlled clinical trials of similar design in patients with IBS-C. IBS was defined as having abdominal pain or discomfort occurring over at least 6 months with 2 or more of the following: 1) relieved with defecation; 2) onset associated with a change in frequency of stool; and 3) onset associated with a change in form of stool. Patients were sub-typed as having IBS-C if they also experienced 2 of 3 of the following: 1) < 3 spontaneous bowel movements per week; 2) > 25% hard stools; and 3) > 25% spontaneous bowel movements associated with straining.8 In the 2 studies, an intent-to-treat population of 1154 patients were randomized and received AMITIZA 8 mcg twice daily or placebo twice daily for 12 weeks. The primary efficacy endpoint was assessed weekly using the patient’s response to a global symptom relief question based on a 7-point, balanced scale. Patients considered to be "overall responders" (the primary endpoint of the study) were 13.8% (N=390) and 12.1% (N=379), compared to 7.8% (N=193) and 5.7% (N=192), respectively, in the placebo groups. In both studies, the treatment differences between the placebo and AMITIZA groups were statistically significant. Study 1 also assessed the rebound effect from the withdrawal of AMITIZA. Following the 12 weeks of treatment with AMITIZA 8 mcg twice daily, withdrawal of AMITIZA did not result in a rebound effect.8

In general, AMITIZA 8 mcg twice daily was well tolerated in clinical trials and has a demonstrated safety and efficacy profile for adult female patients with IBS-C. The most common adverse reactions in 1011 patients through 1 year on AMITIZA 8 mcg twice daily (incidence greater than 1%) were nausea (8%), diarrhea (7%), abdominal pain (5%), and abdominal distension (3%) versus 435 patients up to 16 weeks on placebo (4%, 4%, 5%, and 2%, respectively).8

The safety of AMITIZA in pregnancy has not been evaluated in humans. AMITIZA should be used during pregnancy only if the potential benefit justifies the potential risk to the fetus. Women who could become pregnant should have a negative pregnancy test prior to beginning therapy with AMITIZA and should be capable of complying with effective contraceptive measures.8

Patients taking AMITIZA may experience nausea. If this occurs, concomitant administration of food with AMITIZA may reduce symptoms of nausea.

AMITIZA should not be prescribed to patients who have severe diarrhea. Patients should be aware of the possibility of diarrhea during treatment, and should be instructed to inform their physician if severe diarrhea and nausea occur.8

In post-marketing clinical trials studying AMITIZA 8 mcg twice daily, there were reports of dyspnea at 0.4% in the treated IBS-C population. These events have usually been described as a sensation of chest tightness and difficulty taking in a breath, and generally have an acute onset within 30 to 60 minutes after taking the first dose. These symptoms generally resolve within a few hours after taking the dose, but recurrence has been frequently reported with subsequent doses.8

Although the underlying pathophysiology is not completely understood and there is no specific test or cure for IBS-C, patients can learn to manage their symptoms with diet, lifestyle changes, and drug therapy. Pharmacists have the opportunity to refer patients who suffer from the symptoms of IBS-C to their physicians, who now have a demonstrated, well-tolerated, and efficacious therapy available to treat this condition. AMITIZA 8 mcg gelcaps taken twice daily is an approved treatment for adult women who suffer from IBS-C. 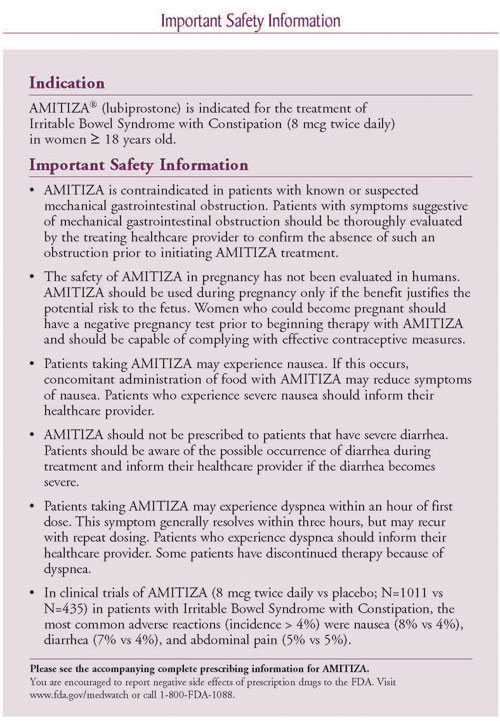 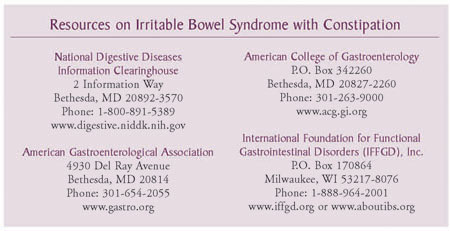