The recent law controlling sales of pseudoephedrine products, as discussed in last month's column, is widely hailed as a groundbreaking effort to control the availability of methamphetamine. However, other nonprescription drugs are also widely abused, such as dextromethorphan (DXM). Teens and adults often abuse DXM for its purported benefits; irresponsible Web sites even provide tips for abusing and dosing DXM and recipes to increase its palatability. Furthermore, the issue of its safety in infants has resurfaced.

DXM Abuse For the past several years, pharmacists have been aware of DXM abuse through increasing sales and a rise in shoplifting of such products as Coricidin HBP. Both the FDA and the U.S. Department of Justice (DOJ) have issued online warnings about abuse of DXM.1,2 The FDA's warning was issued on May 20, 2005.1 It stressed the safety of the ingredient when used as a cough suppressant in small amounts but listed the consequences of abuse (e.g., brain damage, seizures, loss of consciousness, irregular heart beat, death). The FDA also revealed the growing practice of purchasing pure DXM powder, with the aim of encapsulating it and selling it to others. With just a few clicks on a popular search engine, one can find two laboratories seemingly prepared to sell pure DXM to anyone with a credit card.

The DOJ "Intelligence Bulletin," dated October 2004, is far more detailed than the FDA Web site and includes photographs.2 The bulletin indicated that reports of DXM abuse had become so startling that the Drug Enforcement Administration had begun to monitor its use and that DXM might be added to the Controlled Substances Act, if warranted. DOJ also described legislation in Texas, North Dakota, and California that was intended to prohibit sales of DXM to minors; however, each law was defeated.

The DOJ bulletin described "plateaus" with DXM abuse.2 Abusers may take the drug orally or snort pure DXM powder. The quantity abused can range from 250 to 1,500 mg per episode (vs. a therapeutic dose of 10 to 20 mg every four hours or 30 mg every six to eight hours). Abusers try to titrate the amount in order to move to the desired plateau. At the first plateau, a mild inebriation begins. The second plateau resembles alcohol intoxication, with slurring of speech and impaired short-term memory. Mild hallucinations may begin. At the third plateau, the abuser undergoes an altered state of consciousness with sensory impairment, especially visual. The fourth plateau brings out-of-body experiences, with possible loss of contact with the senses, similar to effects seen with phencyc­ lidine or ketamine.

More problems arise with abuse because DXM is usually available as hydrobromide salt. While reports seldom mention it, bromide intoxication is possible.3,4 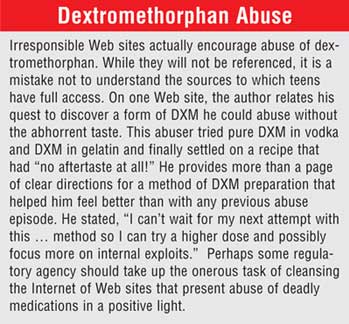 Abuse of DXM Combination Products
The DOJ bulletin carefully explained the problem faced by users who ingest combination products containing DXM. These abusers also ingest supertherapeutic and/or toxic quantities of the additional ingredients. DOJ focused on three ingredients: Overdoses of acetaminophen can cause hepatic damage and death; chlorpheniramine can cause tachycardia, incoordination, seizures, and coma; and guaifenesin can cause emesis. One multiadditive cough product, Buckley's Mixture, includes such odd ingredients as camphor, ammonium carbonate, Canada balsam, menthol, pine needle oil, and tincture of capsicum. Many of these products have no FDA-approved oral use, and the effects of oral ingestion could be devastating. Abusers who choose a medication with this mix of unapproved ingredients risk unknown and potentially deadly sequelae.

Apparently, some abusers are aware of the dangers of the additional ingredients, engaging in a practice known as the "robo shake."2 After ingesting large amounts of DXM cough syrup combinations, they induce vomiting, hoping that they have absorbed sufficient DXM to reach the desired plateau while expelling the toxic ingredients. The fallacy in this strange practice is that absorption of all ingredients occurs simultaneously. Thus, the user still risks toxicity from the other active ingredients. Some abusers, however, have discovered and shared chemical methods to extract DXM from cough syrups.

Obtaining DXM for Abuse Purposes
The DOJ described widespread availability of DXM at raves or other locations where young adults gather.2 It may be sold with the understanding that the purchaser is receiving MDMA (ecstasy), heroin, or ketamine.2 If DXM and MDMA are used simultaneously, deadly hyperthermia may occur. The DOJ also stressed that one of the most frequently abused products is Coricidin HBP Cough & Cold, as it contains 30 mg of DXM per red tablet. It is referred to as "triple C," in reference to the three C's imprinted on the tablets. Other names include "skittles," "dex," "candy," "red hots," and "red devils." The DOJ also pointed out that Robitussin DM is a popular choice because its DXM content is 2 mg/mL.

Case Studies of DXM Abuse
The DOJ provided several instances of DXM abuse. In one case, a 14-year-old Colorado boy tried to cross a highway under the influence of DXM.2 Two cars hit him, and he subsequently died. Investigators hypothesized that visual problems caused him to misjudge the time he would have to cross the road. Abuse of DXM powder caused two deaths--a suicide and an unintentional overdose.2

Two related abuse cases provided another example of the dangers of DXM abuse.5 Two 12-year-old girls shoplifted several boxes of Coricidin Cough & Cold, each reportedly containing 30 mg of DXM and 4 mg of chlorpheniramine. One of the girls admitted later that she had been abusing DXM for the past 12 months, while the other had a history of intermittent cannabis use. They ingested eight geltabs each before going into a movie theater; a few minutes later, they decided to empty the box and took another eight apiece. One girl vomited 30 minutes later, and the other vomited five times. After the movie, one of the girls engaged in laughter at inappropriate times and admitted abuse to her parents. Both girls were taken to an emergency department. They experienced lateral nystagmus, and physicians also reported minimally reactive pupils, dry oral mucosa, facial flushing, and the appearance of mild illness. A screening test for drugs of abuse was negative in both girls. Both recovered after being given intravenous fluids.

Another case illustrates the toxicity dangers from DXM combinations.6 A 16-year-old honor roll student had used Coricidin HBP Cough & Cold to get high many times, but over one 72-hour period, she took 50 tablets of Coricidin HBP Maximum Strength Flu. In the emergency department, it was found that acetaminophen had significantly damaged her liver. She was given oral N-acetylcysteine but developed manifestations of severe liver compromise. As her condition continued to deteriorate, she was evaluated for a liver transplant. Eventually, she improved, and a transplant was not needed.

The DOJ bulletin stated that DXM was not yet proven to be addictive, but it did cause withdrawal cravings in some abusers.2 In one case, a 16-year-old asked his mother for help with his DXM addiction.7 He had begun drinking DXM cough syrup from the family medicine cabinet in a quantity of one bottle per episode. The unpleasant taste and relatively low concentration (15 mg/dose) spurred him to graduate to Coricidin HBP Cough & Cold. He also discovered that he could more easily carry the tablets to school surreptitiously. Being able to take tablets containing 30 mg each allowed him to meet the accelerating demands of tolerance that are characteristic of other addictions. He coined a term, "sheeting," for his practice of ingesting one full "sheet" of 16 tablets per episode.

DXM abuse is not limited to teens. A 66-year-old recovering alcoholic despondent over marital difficulties discovered that DXM cough syrup produced euphoria resembling alcohol addiction. 4 She began DXM abuse with an occasional 4-oz bottle of store-brand DXM/guaifenesin mixture, graduating to a maximum consumption of 16 oz daily (equivalent to 960 mg of DXM). Three days after halting the abuse, she presented to physicians with sharp epigastric abdominal pain, nausea/vomiting, hand tremors, depression, dysphoria, and insomnia. Given withdrawal support, she eventually recovered from her addiction.

DXM Administration to Babies
The minimum FDA-approved age for self-care with DXM is 2 years. One company has circulated pediatric dosing charts to pharmacists.8 The sheets include nine popular DXM-containing products, each of which has dosing directions for infants as young as 6 months. Some products also contain acetaminophen, pseudoephedrine, and/or guaifenesin, all with lower age cutoffs of 2 years. Some products also include chlorphen­ iramine, not known to be safe for self-care in patients younger than 6. These doses are not FDA approved as safe in those ages in self-care situations. The references are two textbooks and the USP-DI 2001. It is not known whether these doses resulted from well-designed, placebo-controlled, double-blinded trials in babies or whether they result from guesswork. If they are research-based, they should be submitted to the FDA to be evaluated and eventually approved for use. Until the FDA approves these doses, pharmacists should be cautious in recommending them for infants.

Pharmacy Solutions
The DOJ stated that some pharmacies voluntarily moved DXM products behind the counter to prevent shoplifting and potential abuse.2 Other pharmacies have instituted sales limits. If the widespread abuse continues unchecked, it may be appropriate for regulatory authorities to consider limiting sales to behind-the-counter status, much like what the 2005 Combat Methamphetamine Epidemic Act did for pseudoephedrine sales. While the industry would likely oppose this move, it may require swift legal action to help check the epidemic of DXM abuse. 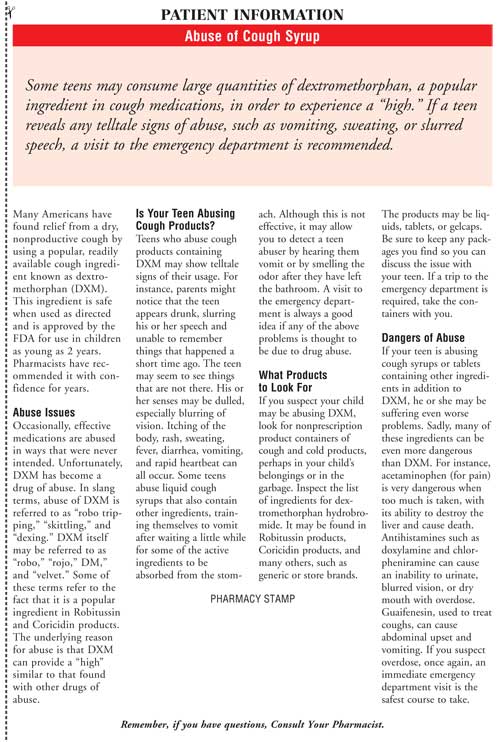