The Warning Letters expressed concerns about the company's manufacturing practices at the two plants. Because of the extent and nature of the violations, an Import Alert was issued that allows detention at U.S. borders of any active pharmaceutical ingredients and both sterile and nonsterile finished drug products manufactured in the two facilities. The FDA's Alert effectively bans more than 30 Ranbaxy drugs from entering the U.S.

Ranbaxy said that it is cooperating with the FDA and is committed to a quick resolution of the issues. To help resolve its problems with the FDA, the company has hired former New York City Mayor Rudolph Giuliani as an adviser. 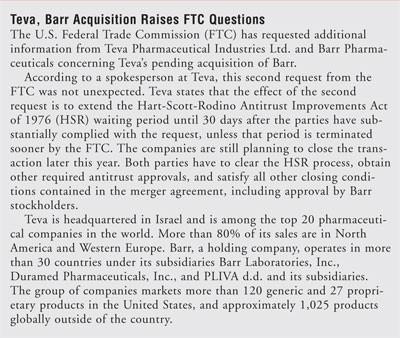 Generic Herpes Drug May Help Control AIDS Virus
Investigators at the National Institute of Child Health and Human Development have concluded that acyclovir, which is indicated in the treatment of the herpes virus, may work against HIV, but only in tissues that are also infected with herpes.

The researchers' findings, published in Cell Host & Microbe, noted that while patients taking acyclovir may have lower levels of HIV, the antiviral drug does not necessarily prevent infection with the AIDS virus. The investigation showed that AIDS patients infected with HIV who took acyclovir for herpes infection had less of the virus in their blood when it was tested.

The researchers concluded that it really doesn't matter which kind of herpes virus a patient has, as the drug seems to reduce HIV's effects regardless of the type of herpes virus. The researchers believe that adding acyclovir to the mix of drugs already used to treat HIV may increase its effect. It is estimated that HIV infects 33 million people globally and has killed 25 million. HIV has no cure or vaccine.

AZ Gets Favorable Court Ruling over Prilosec Patent
Apotex and Impax lost their appeal that they did not infringe on patents covering AstraZeneca (AZ)'s heartburn drug Prilosec. AZ had alleged that the companies infringed on patents related to omeprazole, the active ingredient in Prilosec. A federal appeals court affirmed a district court decision that the two companies did infringe on the patents.

The case dates back to 1999, when Impax and Apotex filed separate Abbreviated New Drug Applications to sell a generic version of Prilosec in three strengths: 10 mg, 20 mg, and 40 mg. The two companies were unsuccessful in attempting to legally move up the expiration of the drug's patent from 2007.

HHS: Medicare Pays Too Much for Some Generics
A report from the Department of Health and Human Service (HHS)'s Office of the Inspector General (OIG) says that the government is paying too much for some generic products. It points to an unacceptable lag time from when a generic becomes available to when it actually gets listed in the government's Medicare system. The report says that the lag time can be as long as six months.

The OIG examined the pricing of irinotecan, an injectable drug used to treat colorectal cancer. According to the report, the OIG regularly studies drugs that are available from multiple manufacturers to compare the average sales prices (ASP) with their widely available market prices and average manufacturer prices. For purposes of Medicare reimbursements, the law permits the OIG to disregard the ASP when the market price of the drug drops below 5%.

After collecting pricing and other sales data from seven manufacturers of irinotecan and comparing first-quarter 2008 Medicare payment amounts with the March 2008 average manufacturer sales price, the OIG found that Medicare was paying more than double the OIG-calculated average manufacturer sales price. This has prompted the OIG to recommend that the Centers for Medicare and Medicaid Services explore options to ensure that Medicare payment amounts for drugs with newly available generic versions accurately reflect market prices.

Mylan Named Manufacturer of the Year
Mylan Inc., headquartered in the Pittsburgh, Pennsylvania, area, has received pharmaceutical services company AmerisourceBergen's coveted 2008 Manufacturer Award in the category of generic pharmaceutical companies with sales of more than $50 million.

The award is based on how effectively a company interacts with AmerisourceBergen in three major areas: responsiveness, collaboration, and investment in strategic initiatives.

"Being named Manufacturer of the Year by AmerisourceBergen reflects Mylan's historical commitment to and close working relationship with our business partners," said Hal Korman, Mylan's North American president. "We recognize that strong partner relationships are built on mutually supportive initiatives and close collaboration."

Teva Licenses Experimental Cancer Drug
Israel-based Teva Pharmaceuticals has licensed Multikine, an experimental cancer drug being developed to treat many tumors. It is initially being targeted as a first-line treatment for head and neck cancer. The drug is being licensed from Cel-Sci for marketing in Israel and Turkey. The drug, which will enter into phase III trials, is a patented mixture of naturally derived cytokines and is the first in a new class of drugs called immune stimulators.

The FDA gave the green light to Cel-Sci to proceed with phase III trials after the drug was shown to be safe, was well tolerated, and improved overall survival by 33% at a median of 3.5 years following surgery in phase II clinical trials. Teva has agreed to finance part of the phase III clinical trial of the drug, and it will conduct a portion of the study in Israel.

Mail-Order Pharmacy Patients More Likely to Choose Generics
Two studies conducted by pharmacy benefit manager Express Scripts showed that consumers are more likely to take their medications as directed and to choose generic drugs when using a home delivery option instead of a retail pharmacy.

One study discovered that compliance was nearly eight percentage points higher for home-delivery pharmacy patients taking high blood pressure medications than for patients who purchased from a retail pharmacy.

The other study revealed that when a letter was sent alerting patients to the existence of a generic alternative, the likelihood of choosing generics in home delivery was 34% greater compared with purchases made in a retail setting.