According to Health, United States, 2006, the 30th report on the health status of the nation, the leading cause of death for infants was congenital malformations, unintentional injuries for those ages 1 to 44, cancer for middle-aged adults (ages 45 to 64), and heart disease for older adults (ages 65 and older). Mortality from heart disease, the leading cause of death overall, decreased 16% between 2000 and 2004, continuing a long-term downward trend.

Among the measures of morbidity in the report, the prevalence of elevated blood pressure or use of antihypertensive medication increases with age. In 2001 to 2004, 30% of men and 33% of women ages 45 to 54 experienced hypertension, compared to 69% of men and 82% of women ages 75 and older. Between 1988 to 1994 and 2001 to 2004, the estimate of adults with elevated serum cholesterol levels greater than 240 mg/dL dropped significantly for older adults. Yet, older women were more likely to have high serum cholesterol levels than were older men. From 2001 to 2004, 26% of women ages 65 to 74 had high serum cholesterol levels, compared to 11% of men ages 65 to 74 years. Among persons 65 and older, the two most frequently reported causes of activity limitation in 2003 to 2004 were arthritis and heart disease or other circulatory conditions. 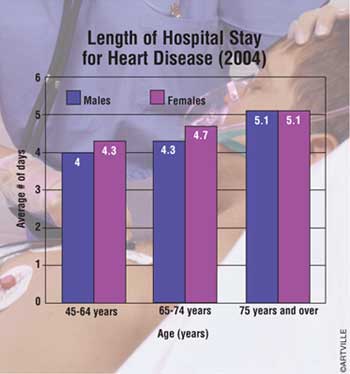 People use health care services to treat health conditions, prevent or delay future health problems, and increase quality of life. Almost all adults 65 and older have Medicare coverage. However, in 2004, among people whose income was below or near the poverty level, 4% to 6% did not get necessary medical care, 6% to 9% delayed their care, and 8% to 12% did not get the prescription drugs they needed due to the cost. The most common reasons for inpatient hospitalization in adults 45 to 64 years old in 2004 were heart disease and injuries. Among this age-group, the hospital discharge rate for heart disease was 80% higher for men than for women. Between 1993 to 1994 and 2003 to 2004, the hospital discharge rate for cardiac catheterization in adults ages 75 and older rose by 42%; the rate in adults 65 to 74 years old remained stable. By 2003 to 2004, the cardiac catheterization rate for adults 75 and older had increased to a level similar to that of adults ages 65 to 74.

Prevalence of Risk Factors Health behaviors have a major impact on heart disease. Cigarette smoking increases the risk, and regular physical activity lessens the risk, enhancing mental and physical function. In 2004, 23% of men and 19% of women 18 and older were current smokers. This is a sharp decline from 1965, when more than 50% of adult men and 33% of adult women smoked, but the declines have slowed since 1990. In 2004, about 33% of adults 18 and older engaged in regular leisure-time physical activity. More than 50% of adults 65 and older were inactive in their leisure time, 25% had some level of leisure-time activity, and an additional 22% participated in regular leisure-time activity in 2004.