Sarcoidosis is a systemic granulomatous disease of unknown origin primarily affecting the lungs and lymphatic systems of the body. It was first described in 1877 and has continued to fascinate both clinicians and scientists since that time.1 Sarcoidosis commonly affects young and middle-aged adults. The lifetime risk for sarcoidosis in the United States is 0.85% for Caucasians and 2.4% for African Americans. The estimated prevalence is in the range of 1 to 40 cases per 100,000, with an age-adjusted annual incidence rate in the U.S. of 35.5 per 100,000 for African Americans and 10.9 per 100,000 for whites.1-4 In recent years, an increased understanding of the pathologic and immunologic basis of this disease has improved treatment. This article will serve as an introduction for pharmacists to the pathology, immunology, diagnosis, clinical presentation, and treatment of sarcoidosis, with a focus on pulmonary sarcoidosis since the lungs are the most common site of granuloma formation.

Etiology, Pathology, Immunology
While the etiology of sarcoidosis is unknown, genetic, infectious, and environmental factors have been implicated as possible causes.5 Epstein Barr, coxsackie B virus, Propionibacterium acnes, Mycobacterium species, aluminum, zirconium, clay, and pine tree pollen are all examples of postulated causative factors.1 Regardless of the cause, it appears that T helper 1 (Th1) lymphocytes play a central role in the immune response.5 The initial response to some infectious, genetic, or environmental antigen is a release of interleukin-2 and tumor necrosis factor gamma (TNF-gamma) from Th1 cells, which in turn recruits more immune cells to the area of inflammation. The net result is an amplification loop involving antigen-recognition, proinflammatory cytokine release, cell activation, and recruitment. These cells accumulate within the lungs and other affected tissues, eventually leading to the formation of noncaseating granulomas.6,7 This local immune response and granuloma formation leads to the tissue and organ destruction characteristic of sarcoidosis. In the lungs, about 75% of the granulomas are located close to or within the connective tissue sheath of bronchioles and subpleural spaces. The pulmonary vasculature is also involved in more than 50% of patients.1,8-10 Sarcoid granulomas either resolve or leave behind fibrotic changes. End-stage sarcoidosis causes parenchymal fibrosis and honey-combing of the lung. 1,9,10

Clinical Presentation
The clinical symptoms of sarcoidosis may present in many different ways depending on the patient's ethnicity and the chronicity, site, extent of involvement of the organ, and the activity of the granulomas (TABLE 1).5,11 Nonspecific symptoms such as fever, fatigue, malaise, and weight loss may occur in up to one third of sarcoidosis patients. Pulmonary sarcoidosis occurs in more than 90% of patients.1 Other, less common forms include cutaneous, cardiac, lymphoid, hepatic, neurologic, and musculoskeletal sarcoidosis. Patients may have a combination of any of these forms of the disease. 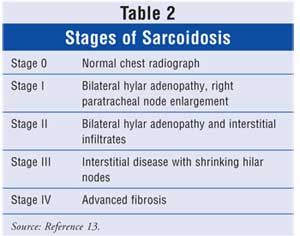 The four goals of a diagnostic workup for sarcoidosis patients are to 1) provide histologic confirmation of the disease; 2) assess the extent and severity of organ involvement; 3) assess whether the disease is stable or likely to progress; and 4) determine if therapy will be beneficial for the patient.1 Initial studies that should be performed include a history and physical exam, pulmonary function tests, complete blood count, serum chemistries, and a tuberculin skin test. 1

The diagnosis of pulmonary sarcoidosis relies on three main findings: 1) the presence of tight, well-formed noncaseating granulomas and a rim of lymphocytes and fibroblasts in the outer margin of the granulomas; 2) perilymphatic interstitial distribution of granulomas; and 3) exclusion of an alternative cause. 1,8,9,14

While spontaneous remissions occur in nearly two thirds of patients, the course is chronic or progressive in 10% to 30%.1,2,15-17 Fatalities have been reported in 1% to 5% of patients, usually due to respiratory failure, central nervous system involvement, or myocardial involvement.1,16,17

Treatment
For many patients, systemic treatment is not necessary and the decision for systemic therapy varies between treatment centers, with some groups treating one third of patients and others treating more than two thirds.12,18-21 Corticosteroids continue to be the mainstay of treatment, but appropriate usage can be unclear. The most recent consensus statement on sarcoidosis from the American Thoracic Society, European Respiratory Society, and World Association of Sarcoidosis and Other Granulomatous Disorders1 clearly recommends systemic therapy with corticosteroids for cardiac disease, neurologic disease, eye disease not responding to topical therapy, and patients with hypercalcemia. Topical steroids should be sufficient in patients with mild disease such as skin lesions, anterior uveitis, or cough.

Most patients with symptomatic progressive pulmonary disease will be treated with corticosteroids as well. 1,20,22,23 The recommended dose is 20 to 60 mg/day of prednisone or its equivalent on alternate days. Patients should be reevaluated for a response after one to three months of therapy. If the patient responds, then the dose can be tapered to 5 to 10 mg/day or an every-other-day regimen for a minimum of 12 months. Most patients improve and stabilize on corticosteroids, but relapses occur in 16% to 74% of patients as the amount of drug is tapered or discontinued.1

For those patients who do not respond to corticosteroids or who need persistent corticosteroids, antimalarial agents or cytotoxic agents should be considered.1,24 These medications have a theoretical benefit due to their immune-modulating actions and have shown variable benefit in sarcoidosis patients either alone or in a steroid-sparing combination. Methotrexate has been shown in small-scale studies 1,25-30 to be beneficial in both new and refractory cases. It can be used alone or with low-dose steroids. Recommended doses are 10 to 20 mg once a week.1 Studies have shown that azathioprine may be beneficial in chronically treated patients with or without prednisone.31-33 The recommended dose is 50 to 200 mg per day.1 For severe refractory patients, cyclophosphamide has shown benefit at a dose of 50 to 150 mg per day.1 Due to significant toxicity, it is now considered a third-line agent.13 Both chloroquine and hydroxychloroquine have shown benefit in the treatment of sarcoidosis, but due to increased risk of retinopathy and blindness, chloroquine is the lesser preferred agent of the two. Hydroxychloroquine is recommended at a dose of 200 to 400 mg per day.1,13,36,37 Combination therapy protocols usually involve corticosteroids and a second-line agent with a gradual taper of the steroid over three to six months as allowed by the patient's clinical status, leaving the second drug as the main therapeutic agent.6

In recent years, medications affecting TNF-alpha have been evaluated for use in sarcoidosis (TABLE 3 ). Pentoxifylline, a phosphodiesterase inhibitor that inhibits the release of TNF-alpha from alveolar macrophages, showed benefit in an open-label trial. 38 Infliximab and adalimumab, TNF-alpha inhibitors, and etanercept, a TNF-alpha receptor blocker, have also been evaluated. These agents have shown mixed results in small case studies and trials,39-44 but no large-scale studies evaluating their efficacy have been performed to date. 13 Pending publication of randomized clinical trials, the use of TNF-alpha blockade in sarcoidosis should remain in the realm of experimental treatment.45 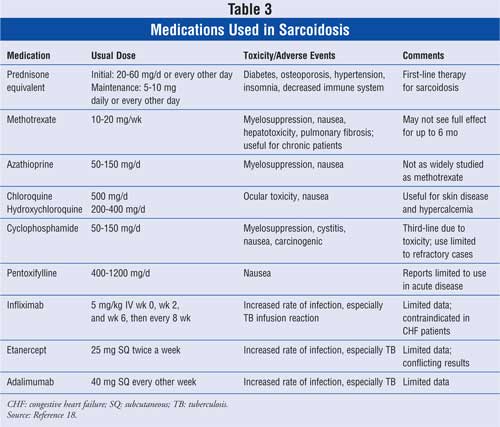 Conclusion
Sarcoidosis is a disease that can affect any part of the body, but most commonly presents in the lungs. While the exact cause of sarcoidosis still remains a mystery, the pathologic and immunologic response of the body is becoming better understood. The medication therapy for this debilitating disease is also not clear-cut. Medications that have immune-modifying effects have shown benefit in sarcoidosis in small case studies and limited controlled trials. Corticosteroids remain first-line agents and bring about remission in many patients. For those 10% to 30% of patients who have a chronic course of illness, steroids are not always the best long-term option. The use of cytotoxic agents, hydroxychloroquine, and medications affecting TNF-alpha have been studied, but the results are mixed. Pharmacists should be well informed of the signs and symptoms of sarcoidosis as well as its treatment. Due to the inherent toxicity of many of these medications, patient education about side effects and monitoring parameters of these medications are of the utmost importance. As readily accessible health care providers, pharmacists are in a unique position to inform patients about sarcoidosis, review the side effects and monitor parameters of prescribed medications, and educate patients on the most current treatment options.