One of the many ways that pharmacists make a difference in the care of their patients is through educating themselves about, monitoring for, and raising awareness of preventable medication-related conditions. Serotonin syndrome, also referred to as serotonin toxicity, is one such condition that, in some cases, may be fatal. Medications with serotonergic activity, some even available OTC ( TABLE 1), are the culprits of this potentially preventable complex of symptoms. The incidence of serotonin syndrome is increasing with the expanded use of serotonergic agents and, specifically, with polypharmacy.1 The FDA recently asked the manufacturers of these medications to include warning labels on their products informing patients about the potential risk of serotonin syndrome.2 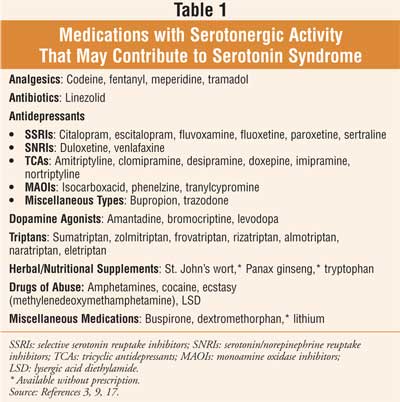 Pharmacists should monitor medication regimens for interactions between serotonergic agents and counsel patients and caregivers about the avoidance of OTC products that may elevate serotonin levels (e.g., dextromethorphan and St. John's wort). Educating patients at risk for potential adverse effects from serotonergic agents (e.g., confusion, muscle spasms, shaking, shivering, sweating) should be an integral part of counseling. Summary Serotonin syndrome is a potentially preventable, medication-related complication that occurs from increased serotonin activity in the central nervous system, usually secondary to the use of one or more serotonergic agents. Early diagnosis and prompt treatment are important in the resolution of this condition. Treatment involves removal of the causative agents and may also include the use of serotonin antagonists (i.e., cyproheptadine) and other interventions. Symptoms typically resolve within 24 hours after withdrawal of the offending medication. Pharmacists can make a difference in the lives of their patients by identifying individuals at risk for serotonin syndrome, recommending changes or alternatives to therapy, counseling patients to avoid prescription and OTC interactions, raising awareness among health care professionals regarding the potential for negative outcomes, and potentially preventing unnecessary human suffering, elevated health care costs, and possibly preventable deaths. References