Last year saw the introduction of a direct renin antagonist (RA), the first new class of antihypertensive medications to enter the market in more than a decade. Not since the release of angiotensin receptor blockers (ARBs) and T-subtype calcium channel blockers (CCBs) have practitioners had a new choice in controlling one of the most common and potentially devastating diseases in the United States. ARBs have slowly progressed to become a common, if expensive, therapeutic alternative, while T-subtype CCBs had a market run cut short by unforeseen fatal toxicities. This review will focus on the first agent of the RA class, aliskiren (Tekturna), reviewing its pharmacology, clinical trials, and pertinent patient-counseling information while trying to put into context its current and potential place in therapy.

Renin, secreted by the kidneys in response to poor renal perfusion and low serum sodium levels, starts the chain of events that characterize the renin-angiotensin system (RAS), ultimately leading to an increase in active angiotensin II. Angiotensin II acts by increasing vasoconstriction and sodium reabsorption, increasing blood pressure (BP). Aliskiren acts as a direct renin antagonist, blocking the conversion of angiotensinogen to angiotensin I. While this may seem similar to angiotensin-converting enzyme (ACE) inhibitors and ARBs, a mechanism unique to RAs is the ability to blunt the plasma renin activity (PRA) that is increased when these other agents are used. The clinical relevance of this blunted PRA is unclear at this time.1 An overview of the RAS and agents that work upon it are presented in FIGURE 1. 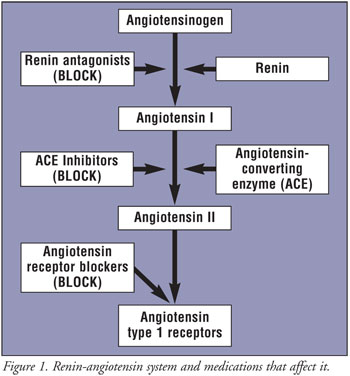 Aliskiren exhibits minimal oral absorption (~2.5%) and has a plasma half-life of approximately 24 hours. A majority of the dose is hepatically metabolized by the CYP3A4 pathway, with 25% excreted unchanged in the urine.1

Dosing and Drug Interactions
Aliskiren is currently indicated for the treatment of hypertension, either alone or in combination with other agents. Its use has not been studied in combination with maximal doses of ACE inhibitors, and this type of combination should only be used cautiously.1

Aliskiren should be taken once daily, preferably at the same time each day. Patients will typically be started at 150 mg and titrated up to 300 mg per day as needed. Doses above 300 mg per day do not result in additional BP reduction and are not approved. 1

Aliskiren does not appear to inhibit or induce known hepatic metabolic pathways. Through an unknown mechanism, the medication seems to reduce the blood levels of furosemide by approximately 50%. Both ketoconazole and atorvastatin increased aliskiren levels, while irbesartan appears to decrease aliskiren levels. The clinical significance of these interactions is unknown. Aliskiren has not been studied in patients receiving warfarin therapy.1

Practical Considerations and Patient Counseling
Aliskiren shares many of the same practical considerations for pharmacists as other classes of medications that act on the RAS. As with ACE inhibitors and ARBs, RAs may cause severe angioedema or subcutaneous swelling. This toxicity can involve any part of the body and can occur at any point of drug therapy. In the event that the larynx, tongue, or mouth is involved, this reaction can be life threatening and patients should seek immediate emergency medical care. Increases in serum potassium are also common to ACE inhibitors, ARBs, and RAs. Combinations of any of these agents will increase potassium levels more than any agent used alone.1

Pregnancy is a contraindication to the use of any agent working directly on the RAS. The fetal toxicities with ACE inhibitors and ARBs are thought to occur in the second and third trimesters, and the same is assumed to be true with the RAs. 1

Aliskiren has been shown to significantly reduce the blood levels of furosemide. Patients receiving these two agents concurrently should be monitored closely for loss of furosemide efficacy. Aliskiren does not appear to cause rebound hypertension when discontinued abruptly. Although patients should be counseled for compliance, noncompliance may not be as dangerous with this class as with agents that cause rebound hypertension (i.e., beta-blockers and direct vasodilators). The most common adverse effect of aliskiren is mild diarrhea, which usually resolves within the first few weeks of therapy.1

Clinical Trials
The efficacy of aliskiren has been tested in various clinical trials, including placebo-controlled studies, comparator studies with other antihypertensives, and in combination with other antihypertensives.1 Aliskiren has been compared to or combined with other antihypertensive agents including hydrochlorothiazide (HCTZ) diuretics, ARBs (valsartan, irbesartan, and losartan), ACE inhibitors (ramipril and enalapril), and dihydropyridine CCBs (amlodipine) in patients with uncomplicated hypertension.1-6 There are no comparative or combination trials with beta-blockers, loop diuretics, alpha-blockers, alpha-agonists, or direct vasodilators. HCTZ diuretics, ACE inhibitors, and ARBs each cause reactive rises in PRA. Therefore, it is hypothesized that these drugs used in combination with aliskiren will inhibit the rise in renin. Comparator trials will be discussed in this review.

Aliskiren Monotherapy: Antihypertensive effects of aliskiren have been displayed in six randomized, double-blind, placebo-controlled, eight-week clinical trials in patients with mild-to-moderate hypertension (TABLE 1). The studies included 2,730 patients given aliskiren doses of 75 to 600 mg; 1,231 patients received placebo. All aliskiren doses decreased BP within two weeks of treatment, with reasonable efficacy seen at 150 to 300 mg, and no clear further efficacy at 600 mg. Patients in the placebo-controlled trials continued open-label aliskiren for up to one year. A statistically significant difference between patients kept on aliskiren and those randomized to placebo was demonstrated by a withdrawal study in which patients were randomized to continue either the drug or placebo. With treatment cessation, BP gradually returned toward baseline levels over a period of several weeks with no evidence of rebound hypertension. BP was lowered in all demographic subgroups. African-American patients tended to have smaller reductions compared with Caucasians and Asians, as observed with ACE inhibitors and ARBs.1 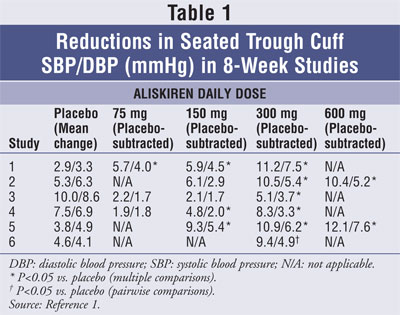 Aliskiren Monotherapy/in Combination with HCTZ: Varying doses of aliskiren (75, 150, or 300 mg) and HCTZ (6.25, 12.5, or 25 mg) were studied alone and in combination in an eight-week, randomized, placebo-controlled trial of 2,776 patients with mild-to-moderate hypertension. The primary objectives were to assess the changes in mean sitting diastolic blood pressure (MSDBP ?95 mmHg) and mean sitting systolic blood pressure (MSSBP 110 mmHg) at baseline. The effects on PRA were also assessed. BP reductions were greater with the combinations than with monotherapy. Responders were defined as achieving a MSDBP 90 mmHg and/or a >10 mmHg reduction from baseline. BP control was defined as a MSDBP 90 mmHg and a MSSBP 140 mmHg. Superior responder rates occurred with aliskiren 300 mg (63.9%; P =0.0005), HCTZ 12.5 and 25 mg (60.6% and 59.0%, respectively; both P 0.02), and all combination doses compared with placebo. Better control and responder rates for all combinations of aliskiren (75 to 300 mg) with HCTZ 25 mg and aliskiren 300 mg/HCTZ 12.5 mg were superior to both monotherapies (P 0.05). Aliskiren reduced PRA by up to 65% from baseline. PRA decreased in all of the combination groups; however, HCTZ alone increased PRA by up to 72%. Aliskiren monotherapy provided significant BP lowering, which was greater when combined with HCTZ. The compensatory rise in PRA induced by HCTZ can be neutralized by renin inhibition with aliskiren.2

Aliskiren Monotherapy/in Combination with Valsartan: Aliskiren and valsartan were investigated as monotherapy and in combination in an eight-week, randomized, placebo-controlled, dose-escalation trial of 1,797 patients with uncomplicated hypertension.1,3 Patients received either aliskiren 150 mg, valsartan 160 mg, the combination of aliskiren 150 mg/valsartan 160 mg, or placebo. After four weeks, all medication doses were doubled and therapy continued for an additional four weeks. Seated trough cuff BP was measured at baseline, four weeks, and eight weeks. BP reductions with the combinations were greater than the reductions with both monotherapies. The aliskiren 300 mg/valsartan 320 mg combination had statistically superior reductions in MSSBP and MSDBP compared with aliskiren 300 mg alone and valsartan 320 mg alone at week 8. Aliskiren used in combination with valsartan may provide additive and tolerable BP-lowering effects.4

Aliskiren and HCTZ versus Combination Therapy: In a double-blind, multicenter trial, 560 obese adults (BMI ?30 kg/m2 ) with arterial hypertension (MSDBP ?95 mmHg and 110 mmHg at baseline) received HCTZ 25 mg daily for four weeks. Nonresponders (MSDBP ?90 mmHg and 110 mmHg) were randomized to four-week, double-blind treatment with aliskiren 150 mg, irbesartan 150 mg, amlodipine 5 mg, or placebo as HCTZ was continued. After four weeks, the doses of aliskiren, irbesartan, and amlodipine were doubled and therapy continued for an additional four weeks. The primary objective was to compare the change in MSDBP from baseline to end point (week 8). A total of 489 out of the 560 patients who received four-week treatment with HCTZ 25 mg were randomly assigned to double-blind aliskiren/HCTZ (n=122), irbesartan/HCTZ (n=119), amlodipine/HCTZ (n=126), or placebo/HCTZ (n=122). Aliskiren 300 mg in combination with HCTZ 25 mg resulted in greater reductions in MSDBP and MSSBP compared with HCTZ 25 mg alone at week 8 (P0.0001). Doubling the aliskiren dose from 150 to 300 mg (in addition to HCTZ 25 mg) resulted in greater BP reductions at week 4 versus week 8. It was concluded that combination treatment with aliskiren and a thiazide diuretic is an effective and well-tolerated therapeutic option for obese patients with hypertension who fail to achieve BP control with first-line thiazide diuretic treatment alone.

Aliskiren is an expensive choice for an antihypertensive. A month's supply of the 150-mg dose costs approximately $70, and the 300-mg dose is $90.7 Place in Therapy

Current hypertension guidelines do not mention the role of RAs in the management of hypertension or hypertension-induced diseases. Those patients most likely to benefit from the reduction of renin activity (i.e., patients with diabetes, diabetes-induced renal disease, and heart failure) were excluded from many of the currently available trials evaluating aliskiren. At this point, the rationale for the appropriate use of aliskiren is extremely limited. The combination product of aliskiren and HCTZ was approved by the FDA in January 2008 for the treatment of hypertension, but not as initial drug therapy.8 Conclusions

A liskiren is the first representative of the RA class of antihypertensives. In all of the reviewed studies, combination therapy with aliskiren plus another antihypertensive agent was significantly more effective in decreasing BP than both agents alone. Comparative trial data show that aliskiren monotherapy has effects on potassium concentrations similar to ACE inhibitors and additive effects when used in combination. Further studies are needed to determine if aliskiren is as beneficial as ACE inhibitors or ARBs in patients with heart failure, diabetes, chronic kidney disease, and high risk of c oronary disease. REFERENCES