In today's society, planned conception and timed intercourse to achieve pregnancy are topics of growing importance for couples seeking to start a family. Many couples desire to time conception in order to approximate date of birth, increase chances of pregnancy, and condense the time required before infertility is diagnosed.1 More than 10% of couples in the United States have difficulty achieving pregnancy. While many of them will require medical intervention, some may conceive simply by having intercourse during the period of days when conception is most likely to occur. 1 Recent research has identified a "fertile window" of approximately six days.1 However, in order to optimally time intercourse, couples must be able to accurately identify this window.1

Traditionally, women have depended on biological markers, calendar rhythms, and self-monitoring of reproductive hormones in order to predict fertility. Used alone, calendar-based methods, which predict ovulation according to previous menstrual cycles, and natural biological markers, such as thickened cervical mucus and changes in body temperature, are unreliable forms of fertility monitoring. Variability in menstrual cycles and subjectivity of body changes render both of these methods inefficient. However, when used with other forms of monitoring, biological markers may aid in estimating fertility. Prior to and during ovulation, the amount of cervical mucus increases and its texture becomes clear and elastic. In addition, body temperature lowers shortly before ovulation and rises once the egg is released.

Self-monitoring of reproductive hormones is a more valuable method for determining fertility. This method includes assessment of urine, cervical secretions, or saliva. Saliva becomes dramatically more concentrated with increased electrolyte and estrogen levels, which are commonly seen prior to ovulation. High estradiol levels lead to increased sodium chloride in the saliva, which crystallizes when dried. During ovulation, the crystallized sodium chloride in dried samples of saliva produces a distinctive pattern, resembling a fern.2 This phenomenon may be observed three to four days before and two to three days after ovulation. However, although several products are available to examine these patterns, most are difficult to use and interpretation is subjective.

Urine tests that detect increased concentrations of luteinizing hormone (LH) are even more accurate than the previously described fertility prediction methods.3 After an egg matures, there is a surge in LH, which stimulates ovulation to occur within 12 to 36 hours. However, LH-detecting urine tests are limited because they do not detect the beginning three to four days of the fertile window.

The OV-Watch
The OV-Watch fertility predictor ( figure 1) is a biological chloride ion–sensing device that surpasses all other fertility prediction methods, due to its ability to predict ovulation four days in advance. During the first four days of the fertility window, cervical mucus is at its most penetrable stage, increasing the probability of conception.4

How the OV-Watch Works
During a woman's menstrual cycle, there is a surge of chloride ion levels that can be seen about six days prior to ovulation.5 This surge appears approximately four days before the estrogen surge and approximately five days before the LH surge, making it an earlier predictor of ovulation than any other methods (figure 2). 5 The OV-Watch is a sophisticated microcomputing device that employs an integrated microcircuit and a specialized biosensor to detect chloride ion concentration changes in perspiration on the skin. A software algorithm processes these readings to determine fertility status. The watch must be worn for at least six hours during sleep, and data are recorded every 30 minutes, for a maximum of 12 readings per day. Once the chloride surge ends, the OV-Watch identifies a six-day fertile window that includes the four most fertile days prior to ovulation. Patient instructions are detailed in table 1. 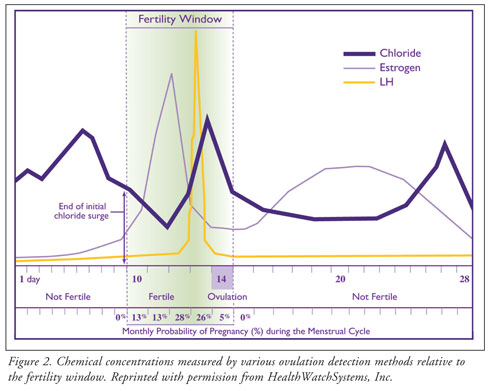 Important Points
The OV-Watch should not be exposed to excessive moisture. Patients should wait at least one hour after showering or exercising vigorously before wearing the watch. Additionally, certain medications, such as hormonal contraceptives, and medical conditions, such as symptoms of menopause, liver and kidney disease, breast-feeding, and polycystic ovary syndrome, can affect the menstrual cycle and may adversely affect the performance of the watch.5 Women should also be aware that in order to begin using the watch, they must be in the first, second, or third day of their menstrual period. In addition, the sensor must be replaced at the beginning of each cycle. 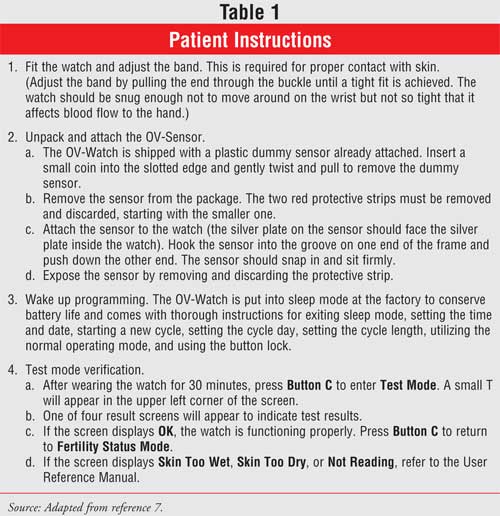 Clinical Studies
The concept of using chloride ion levels to predict fertility was illustrated by a U.S. clinical trial that examined sweat chloride changes in women during their menstrual cycle. Forty spontaneously ovulating women ages 21 to 40 were involved and data were collected 12 times per day using an ion-selective watch. Actual time of ovulation was confirmed using blood LH levels. Results indicated that the average chloride ion level peaked five to seven days prior to ovulation. This study suggested that fluctuations in menstrual cycle hormones have an effect on sweat chloride release, forming a pattern that can be used to predict the fertility window.

The usefulness of the OV-Watch was assessed in a clinical trial conducted by researchers at Duke University in Durham, North Carolina, and the Woman's Institute in Philadelphia. The effectiveness of the OV-Watch for predicting ovulation within approximately three days of ovulation was compared with that of two commercially available ovulation predictor products--Clear Plan urine LH test strips and basal body temperature thermometers.6 A total of 105 women were selected for participation in the study. The study concluded that the OV-Watch was equivalent to the other two ovulation prediction products in correctly determining the actual day of ovulation within two or three days. Additionally, it was confirmed that the OV-Watch could identify more days of the fertile window than could LH-detecting urine kits. Seventy-three percent of women using the OV-Watch versus 13% of those using LH-detecting urine kits were able to detect four or more of their fertile days. Furthermore, 56% of women using the OV-Watch detected five to six fertile days, compared with none of the women using LH kits. Nearly 66% more pregnancies are estimated to occur by the sixth month in patients who use the watch.

Conclusion
The OV-Watch increases the chances of achieving pregnancy by accurately identifying the fertile window. Doing so allows couples to optimize days within that period, making planned conception more natural. Additional information about the OV-Watch is available online at www.ovwatch. com or by phone at (866) OVWATCH (866-689-2824).