US Pharm. 2006;5(Student suppl):14-17.
For more than 50 years, pharmacists have dispensed antibiotics to treat infections caused by bacteria and other microorganisms. After their discovery in 1928, antibiotics rapidly grew in number and potency, causing doctors and scientists to almost entirely disregard the challenge of treating bacterial diseases.1 However, much has changed since then, as bacterial resistance now undermines the efficacy of antimicrobial agents. The misuse and overuse of antibiotics have resulted in a continuous evolution of bacteria resistant to the drugs that were previously able to control them. Bacterial resistance was demonstrated when penicillin was first administered during clinical trials. Initial cultures of Penicillium were contaminated with Escherichia coli, which produced an enzyme that degraded penicillin. In the second clinical trial in 1943, one of 15 patients died from a streptococcal infection after E. coli had become resistant to the antibiotic.2 Soon after, a description of penicillinase-producing strains of Staphylococcus aureus was published in 1944, and scientists learned that bacteria could become resistant to penicillin.3 Other bacteria have shown antibiotic resistance. For example, clinicians have tried to control the spread of methicillin-resistant S. aureus (MRSA) bacteria since it was first identified in the 1960s. In the mid-1970s, Haemophilus influenzae and Neisseria gonorrhoeae became resistant to penicillin. Even vancomycin, often the antibiotic of last resort, is in jeopardy; in 2002, a vancomycin-resistant S. aureus (VRSA) isolate was recovered from a hospital patient in Michigan. The resistant determinant may have been acquired through the exchange of genetic material from a vancomycin-resistant enterococcus. Researchers now know that antibiotic-resistant genes existed long before humans began developing and using antibiotics.2 Bacteria that create antibiotics are protected by genes that make them resistant to the antibiotics they produce. Some bacteria that do not produce antibiotics also have resistant genes. As a result, many researchers are predicting a return to the pre–antibiotic era in which only supportive treatment would be available to manage infections. While the evolution of bacteria towards resistance to antimicrobial drugs represents the general evolution of bacteria that is unstoppable, much can be done to delay the subsequent spread of antibiotic resistance.4 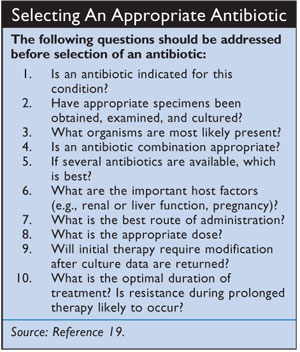 How Widespread Is Bacterial Resistance?
There has been an alarming rise in resistant (often multidrug resistant) hospital- and community-acquired bacteria during the past two decades both in the United States and worldwide.5 Currently, every country in the world is plagued with drug-resistant diseases such as gonorrhea and lethal staphylococcal infections.4 According to the Public Health Action Plan published in 2000, drug-resistant pathogens are a growing menace to all people, regardless of age, gender, or socioeconomic background.6

Up to 30% of S. pneumoniae strains found in some parts of the U.S. are no longer susceptible to penicillin, and multidrug resistance is common. Approximately 11% of these strains are resistant to third-generation cephalosporins, and resistance to fluoroquinolones has occurred. In addition, nearly all strains of S. aureus in the U.S. are resistant to penicillin, many are resistant to newer methicillin-related drugs, and some have a decreased susceptibility to vancomycin. Many other pathogens, such as HIV, the bacteria that cause tuberculosis and gonorrhea, the fungi that cause yeast infections, and the parasites that cause malaria are becoming resistant to standard therapies.

The Mechanism of Resistance
Research efforts previously directed toward discovering new antibiotics are now largely focused on learning the mechanics of bacterial resistance. Bacteria have developed two types of strategies for circumventing the action of antibiotics: (1) by mutation where an alteration in a gene produces a change in later generations or (2) by incorporating exogenous genetic material as described previously in the first reported VRSA case in Michigan.9 The end result is a decreased or complete lack of susceptibility of the organisms to antibiotics that were previously effective. While some bacteria have intrinsic resistance mechanisms that predate the introduction of antibiotics, others have developed resistance due to many contributing factors, such as overuse, suboptimal dosing, incorrect choice of antibiotic, incorrect duration of treatment, or inappropriate route of administration.


Understanding the mechanisms and effects of mutation can be quite complicated. For example, fluoroquinolone resistance, in part, "arises from spontaneous mutations in the genes encoding the enzyme subunits. With GyrA and ParC units of the resistant bacteria, amino acid changes are generally localized to a region of the enzyme in the amino terminus that contains the active site, a tyrosine that is covalently linked to the broken DNA strand during enzyme action. For the GyrB and ParE subunits of resistant bacteria, amino acid changes, when present, are usually localized to the midportion of the subunit in a domain involved in interactions with their complementary subunits."10 In simpler terms, bacteria can become resistant to fluoroquinolones by making one or a few mutations to a gene that encodes a DNA gyrase subunit, an enzyme involved in returning newly replicated DNA to its supercoiled form. As a result, the antibiotic no longer binds to the mutant enzyme.2

The mechanism of amino-lactam resistance of S. pneumoniae involves genetic mutations that alter penicillin-binding protein structure and results in decreased affinity for all beta-lactam antibiotics.11 This mechanism of resistance is acquired through a process known as natural transformation, in which a particular genome encoding the alteration is picked up from other pneumococci and incorporated into their own DNA. Bacteria, single-celled organisms, often donate antibiotic-resistant genes to other species of bacteria in the human body. There are three common forms of horizontal gene transfer: transduction, conjugation, and transformation. Horizontal gene transfer is distinguished from vertical transfer, which occurs between a parent and its offspring. Horizontal gene transfers are fairly common in nature and may have contributed to the genetic diversity now evident in bacteria.12

The ability of pneumococcal strains to acquire resistance from a wide variety of organisms is particularly disturbing, given the prevalence of enterococci bacteria that carry a transferable gene for vancomycin resistance. Resistance to vancomycin occurs when several genes encode several proteins that comprise a pathway for changing the peptidoglycan cross-linking peptides into a form that no longer binds vancomycin but can still be cross-linked by bacterial enzymes.2 MRSA and vancomycin-resistant enterococci (VRE) cause nosocomial infections and are associated with increased rates of illness and death. Both organisms are now endemic in many institutions, particularly in intensive care units. 13

Bacterial Strategies
Bacteria use several strategies to combat antibiotics. First, they can produce specific proteins that chemically modify the antibiotic to prevent the drug from interfering with the activity that it was designed to inhibit. Second, bacteria can insert a protein or efflux pump into its cytoplasmic membrane. This pump can eject the antibiotic as soon as the antibiotic moves into the cytoplasm. As a result, the concentration of the antibiotic in the vicinity of the bacterial ribosomes is too low to effectively inhibit the synthesis of bacterial proteins. A third strategy is to chemically modify or mutate the target of the antibiotic so that no binding occurs. For example, some bacteria become resistant to penicillin by mutating the enzymes that penicillin inhibits, which are essential for forming the rigid cell wall.2

Is There a Solution?
Clinicians today should consider new approaches for treating patients while minimizing excessive antibiotic use. It has been estimated that at least one half of antibiotic use in the developed world--and perhaps more in the developing world--is inappropriate.15 To help combat this problem, two important points should be considered. First, when treating seriously ill patients, potentially resistant pathogens must be covered even if it is necessary to use a broader range of antibiotics. Second, antibiotics should not be used in clinical situations in which the patient will not benefit from receiving the drug (e.g., viral upper respiratory infections).

Current research has proven that a patient's likelihood of carrying a resistant organism is doubled if he or she has taken any antibiotic for any reason with the previous two months. 16 This study demonstrated a dose-response relationship to increasing exposure of trimethoprim, as well as increasing amoxicillin resistance with any exposure to beta-lactam antibiotics.16

How to Counsel Patients
Patients should be informed that most infections do not require antibiotics; in fact, antibiotics may actually harm a patient by affecting the beneficial bacteria in his or her body and may be detrimental to society by encouraging bacterial resistance.17 Patients should be aware that antibiotics destroy beneficial bacteria as well as pathogens. When infections are treated with an antimicrobial agent, all bacteria in the host are affected, including the normal residents. This can result in the selection of resistant commensals, particularly in children who are frequently given oral antibiotics. These conditions favor the transfer of genes from the surviving organisms to human pathogens.4 Moreover, non–disease-causing bacteria are essential parts of the body's natural armor against infectious bacteria.18 It may appear that compliance with an antibiotic regimen is more likely when pharmacists explain the root causes of resistance to patients.

The Handbook of Antibiotic s, which provides a series of questions to address before an antibiotic is selected, can help pharmacists counsel patients.19  The Centers for Disease Control and Prevention (CDC) has sponsored several conferences to promote appropriate antibiotic use in the community. Information on the most recent conference is available on the CDC Web site and can be used to enhance patient compliance.20 The FDA has addressed the issue of bacterial resistance through a number of initiatives, including a Public Health Action Plan to Combat Antimicrobial Resistance and a "Get Smart: Know When Antibiotics Work" campaign.21 More information on these initiatives is available on the FDA Web site.