In 2003, most hysterectomies (90%) performed in the United States were done for benign conditions, which make up the majority of indications for this procedure. A total of 600,000 hysterectomies were performed that year, with 66% done abdominally, 22% vaginally, and 12% with laparoscopic assistance.1,2 In all, nearly one-third of all women will have a hysterectomy by the age of 65.1,2 Although hysterectomy is a relatively common procedure, complications may occur during or after the surgery that require the attention of a woman's health care provider. Pharmacists can help this population of women in many ways, one of which is the recognition of symptoms that necessitate immediate attention by the patient's physician.

Hysterectomies are performed for a number of reasons. These conditions fall into one of the following diagnostic categories:

Uterine Leiomyoma: Leiomyomas, or uterine fibroids, are noncancerous growths of uterine muscle that develop in one-third of all women. These fibroids can lead to pain and excessive, irregular vaginal bleeding. Leiomyoma is the most common indication for hysterectomy; once performed, the procedure alleviates both current and recurrent symptoms.3 Medical management of symptomatic fibroids is available, but numerous studies report a lack of long-term effectiveness with most medicinal agents.4,5

Pelvic Organ Prolapse: Pelvic organ prolapse is when the stretching and weakening of the pelvic muscles and ligaments causes the uterus to fall into the vagina. Women with a prolapsed uterus often report pelvic heaviness, low back pain, stress urinary incontinence, difficulty voiding, and sexual dysfunction. Risk factors for prolapse include genetic predisposition, increased age, estrogen deficiencies, pregnancy, vaginal birth, and chronic increased pressure on the abdomen due to chronic constipation or coughing.6,7 In mild cases, exercises and physical therapy to strengthen the pelvic floor, in combination with behavioral modification, should be attempted before surgery is considered.8 For severe prolapse, however, hysterectomy is the preferred treatment for symptom relief.7

Endometriosis: Endometriosis, the excessive growth of endometrial tissue outside of the uterus, occurs in one of every five women worldwide.12 While infertility and endometrial cancer can result from endometriosis, pain is the most commonly reported symptom.13 Pain control is the primary goal of treatment, and pharmacologic options should be initiated prior to surgical intervention.14 Hysterectomy should be considered when the pain becomes severe or fails to improve with conservative surgery or medicinal treatments.14,15

There are multiple routes by which a hysterectomy can be performed, including abdominal, vaginal, and laparoscopically-assisted approaches. Determination of which method is most appropriate is based on several factors, such as the pathology of the problem, the individual patient's anatomy, patient preference, and physician expertise.18

Although hysterectomy is generally considered safe, several possible complications are associated with the procedure. These complications can result in mild-to-severe morbidity and even (although rare) mortality.18,20,21 Although their incidence is low, it is important to be aware of the immediate and long-term complications that can result from hysterectomy.

Immediate Complications: Ureteral injuries are common, owing to the size and location of the ureter, and generally are the result of excessive electrocautery and lasering adjacent to the ureter during surgery.20 The incidence is reported to be 0.5% for hysterectomy performed for benign disease and up to 1.6% for laparoscopically-assisted hysterectomy.21 If injury occurs during surgery, repair is more likely to be successful if performed intraoperatively at the time of injury.20,22

The risk of bowel injury varies depending on the type and method of the hysterectomy. While uncommon, injury to the rectum or to the ascending or descending colon can occur.23 The incidence of bowel injuries is 0.4%, with laparoscopically-assisted abdominal hysterectomy carrying the largest risk.24

Bladder injuries occur in up to 2% of hysterectomy cases.25 In vaginal hysterectomy, the bladder can be perforated during entry into the anterior cul-de-sac; in abdominal hysterectomy, injury can occur when the peritoneum is opened or during dissection of the bladder off the lower uterine segment, cervix, and upper vagina.18 Although most of these complications are corrected during the procedure, postoperative incontinence due to bladder injury during surgery is commonly reported.26,27

The most serious postoperative complication of hysterectomy is hemorrhage, which occurs in 1% to 3% of patients.25 Although all patients are at risk, those having a peripartum hysterectomy, hysterectomy for gynecologic cancer, elective hysterectomy for pelvic inflammatory disease, or pelvic abscesses are at greater risk for developing postoperative bleeding complications.18,22 If postoperative vaginal bleeding develops and is determined to occur below the vaginal cuff, outpatient suturing of the site will generally stop the bleeding. If the hemorrhage is above the vaginal cuff, further examination in the operating room is warranted. The patient is then stabilized with IV fluids and transfused with two to four units of packed red blood cells. Next, the bleeding will generally tamponade, stop, and form a hematoma that will eventually be reabsorbed into the body.18,23,28

Psychological effects that may manifest following hysterectomy vary from individual to individual. While some studies have found that women experience new feelings of depression, anxiety, decreased libido, or social disruption due to the lengthy postprocedural recovery, other studies have concluded that women undergoing hysterectomy have improved quality of life because their previous unpleasant symptoms have been relieved.32,33 It is important for patients and their physicians to communicate regularly after the hysterectomy. Patients who experience ongoing depression after surgery should speak with a health care provider to determine the need for counseling or the use of antidepressant medications.

Although multiple complications may result from this procedure, it is important to keep in mind that most women are quite satisfied with the results of surgery and with the significant symptom relief they experience (TABLE 1).34 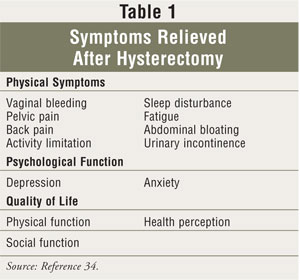 Preoperative and Intraoperative Medications: To prevent the onset of infection, it is recommended that patients undergoing hysterectomy be treated prophylactically with a broad-spectrum antibiotic 30 minutes prior to surgery.35 In addition, patients at risk for developing deep venous thrombosis or pulmonary embolism may be given heparin or enoxaparin before the procedure to prevent the occurrence of these events.22,23,28 Various medications used preoperatively and intraoperatively, and their doses, are detailed in TABLE 2.18,23,28,36 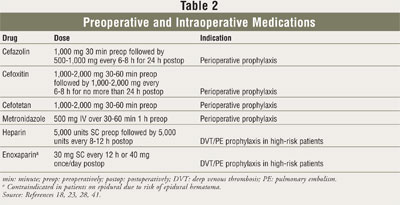 Postoperative Medications: With up to 85% of patients experiencing moderate-to-severe pain after hysterectomy, postoperative pain management is essential.37 Successful pain control leads to increased patient satisfaction, shorter recovery time, and decreased overall health care costs for the procedure.37,38 In the most severe cases, IV or intramuscular injections of an opiate such as morphine, fentanyl, or hydromorphone should be utilized; however, oral analgesic agents are likely to be adequate on the first postoperative day.23 Acetaminophen and nonsteroidal anti-inflammatory drugs are two nonopioid treatment options to be considered. Because they are well tolerated, are nonaddictive, and carry a more desirable side-effect profile than opiates, these agents should be used when appropriate for the management of postoperative inpatient and outpatient pain.39

Estrogen replacement is the most effective therapy for the treatment of moderate-to-severe vasomotor symptoms associated with menopause, reducing hot flashes from 50% to 100% within the first four weeks of medication initiation.41 While there are no current guidelines as to the duration of estrogen therapy, the FDA recommends the lowest dose for the least amount of time, with continual physician follow-up to evaluate effectiveness. Estrogen-containing products available for use in the treatment of menopausal symptoms are listed in TABLE 3.36 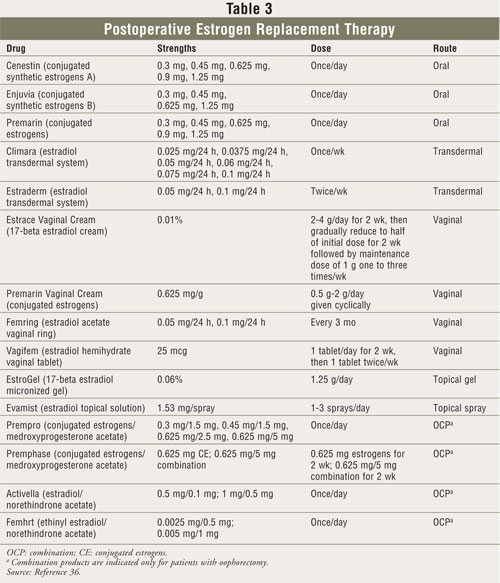 Although no nonhormonal treatments for menopausal symptoms are approved by the FDA, several agents are often used off-label to treat the vasomotor symptoms associated with menopause. They include the following: selective serotonin reuptake inhibitors, venlafaxine, clonidine, gabapentin, vitamin E, isoflavones, and black cohosh.42

Role of the Pharmacist

While pharmacists may not play a direct role in provision for hysterectomies, they are nevertheless in a unique position to educate women about the risks and benefits associated with the procedure. It is imperative for pharmacists to be aware of the postoperative complications of hysterectomy, as they are likely to encounter patients who are seeking relief from these symptoms. A knowledgeable pharmacist will be able to provide assistance with OTC agents when appropriate, as well as recognize serious symptoms that warrant referral of the patient to a physician.