depressive disorder (MDD) is a condition that is associated with a sad and depressed mood. In children, this same mood is accompanied by additional irritability and hostility. There are limited treatment options for children with this disorder. Clinicians generally treat children with MDD with the same medications that are used to treat adults, especially the selective serotonin reuptake inhibitors (SSRIs). However, concerns exist regarding the possible link between suicidality (suicidal thoughts and behaviors) and SSRIs and other antidepressants. Two major reports and a thorough FDA review have addressed this issue, resulting in significant changes to warnings and labeling for these medications.

Epidemiology
From 1987 to 1996, the use of antidepressants increased from 0.3 to 1 per 100 children and adolescents.1 Specifically, the use of antidepressants increased from 0.5 (95% CI, 0.19 – 0.81) to 2.1 (95% CI, 1.26 – 2.98) per 100 adolescents ages 15 to 18 during this period.1 The World Health Organization reported in 2001 that the United States had a 5.3% decrease in suicide rates2; however, this rate did not distinguish between age-groups. In February 2004, David Shaffer, MD, from Columbia Uni­ versity and the New York State Psychiatric Institute reported in an FDA hearing that the third leading cause of death in U.S. youths ages 15 to 19 was suicide, with 1,611 deaths in 2001.3 While depression is the most common mental disorder that leads to suicide, the issue of whether drug treatment leads to suicidal behavior in young people is under investigation.2

This report concluded that suicidal and aggressive behaviors were described more often than other "less serious adverse events" (mania and euphoria) in children.4 Within the year prior to the report, there had been an unusually high number of reports of suicidal and hostile behaviors in children taking paroxetine and venlafaxine.4 Although these reports are concerning, it is important to remember that participation in FDA's reporting system is voluntary for consumers and health professionals; thus, only a limited number of events are reported to the FDA.4

The center also concluded that there are two confounding factors that relate to children and not to adults. 4 First, parents monitor their children's behavior and maintain oversight. Second, children normally exhibit significant mood swings. There are insufficient data to assess the effects of these two factors on the reported outcomes in children and young adults. The increase in suicidal and aggressive behaviors may simply be due to the increasing number of antidepressants used in children. 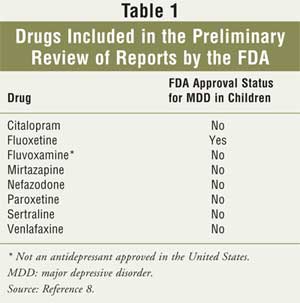 American College of Neuropsychopharmacology Preliminary Report
The American College of Neuropsychopharmacology (ACNP) Task Force on SSRIs and Suicidal Behavior in Youth recently evaluated the safety and efficacy of SSRIs in children.5 The ACNP was concerned about the role of SSRIs in suicidal thinking or in suicide attempts in children. The ACNP stated that its report is only preliminary, as regulatory agencies and pharmaceutical companies have withheld access to some information.

The ACNP Task Force assessed results from 15 double-blind, randomized, placebo-controlled clinical trials that evaluated the effectiveness of SSRIs and other antidepressants in 2,000 children.5 Since many of the trials used more than one outcome measure, there were multiple interpretations of the results in several of these studies.

The ACNP focused on two major studies due to their size and methodology. In the first, 376 patients treated with sertraline showed improvement in depression symptoms, based on the Children's Depression Rating Scale–Revised (CDRS-R) total score. 6 Sixty-nine percent of these patients, ages 6 to 17, responded to treatment, compared to 59% taking placebo (P = .05). Sertraline produced considerable improvement in the treatment of depression. Adverse events reported were diarrhea, vomiting, anorexia, and agitation, with other serious adverse events seen in seven patients in the sertraline group and six in the placebo group. Also reported in the sertraline group were two suicide attempts, three suicidal ideations, one aggressive reaction, and one medical hospitalization. The placebo group had two suicidal ideations and four medical hospitalizations. The study reported that there was no significant difference between the sertraline and placebo groups in regard to "other serious adverse events."

The other major study included in the ACNP report evaluated the use of fluoxetine for treatment of depression in children.7 This study by Emslie et al. reported a 41% improvement in the treatment group compared to 20% in the placebo group (P <.01) on the CDRS-R.7 The main adverse event reported was headaches. There were no serious adverse events such as suicidal thinking or suicide attempts.

The ACNP stated that SSRIs are the only drugs that should be used to treat depression in children and adolescents, as other classes of drugs, such as tricyclic antidepressants, have not been approved for this indication.5 The ACNP report concluded that there is evidence of efficacy of SSRIs to treat depression in children.5 Regarding the reports of an association of SSRIs with suicidal ideations and attempts, first raised about 10 years ago, the ACNP reported that it did not find a statistically significant relationship between antidepressants and suicidal behavior or ideation in youth in any of the studies it considered. It also found that none of the 2,000 young people it studied died of suicide. The Task Force concluded that claims that SSRIs cause suicidal behaviors are insufficient without further controlled studies. The ACNP further concluded that the benefits of treating depression with SSRIs outweigh the risks of suicidal behaviors.5 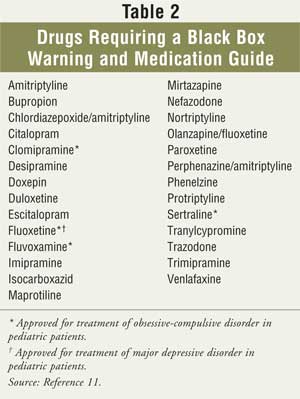 In 2003, the FDA issued a Public Health Advisory to warn physicians about reports of antidepressant medications causing suicidal behaviors in clinical studies of young patients with MDD. 8 Eight drugs (see Table 1) and 4,100 pediatric patients had been studied to determine if there were any links between these drugs and the reported increase in suicidal behaviors.9 In October 2003, the FDA identified 109 cases that were possibly suicide-related, although no deaths were reported. The agency concluded that there was no direct evidence of a link between these drugs and suicidality.8 In January 2004, the FDA issued a statement that no deaths by suicide have been found in young patients taking antidepressants.9 According to the FDA, adverse events are difficult to determine when there is no control group, and suicidal thinking and attempts can also take place in individuals with untreated depression. 9

In February 2004, an FDA advisory panel recommended that stronger warnings should be included on SSRI labels.10 The panel also concluded that more controlled studies of antidepressants need to be conducted in children. 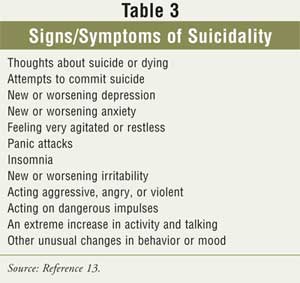 This issue was regularly reviewed until the FDA decided October 15, 2004, that all manufacturers of antidepressants must add to their product labeling a black box warning (see Table 2 and sidebar), additional statements of warning to practitioners, and information about pediatric studies.11 The FDA reached its decision after reviewing data from a combined analysis of 24 trials that included more than 4,400 pediatric patients and nine antidepressants (the eight drugs in Table 1 and bupropion). The analysis revealed a 4% average risk of suicidality in patients taking these medications, which was twice the 2% risk found in the placebo group. Although no suicides occurred in either group, the FDA determined that antidepressants do increase the risk of suicidality; thus, stronger warnings for health care providers, patients, and caregivers were warranted.11 In addition to the changes in the package insert, the FDA also required that a Patient Medication Guide be given to patients to advise them of the suicidality risk and precautions that should be taken.11 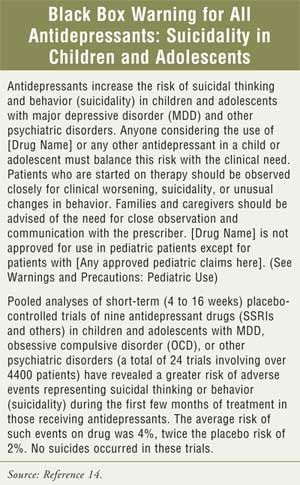 Pharmacist Counseling
As health care professionals, pharmacists may be asked questions regarding this sensitive issue. The FDA recommends at this time that parents or guardians of pediatric patients be advised to consult with their physicians before having their children discontinue antidepressants.8 It is important to counsel on this since many antidepressant medications should not be stopped suddenly. 8 Furthermore, pharmacists should closely monitor patients with a high risk of suicidal or aggressive behaviors during initiation of drug therapy and counsel parents to monitor children for suicidal ideation and behaviors during drug initiation and discontinuation and when there are dosage changes.8,11 Any behavioral changes relating to suicidality (Table 3) should be reported to the prescriber immediately.11 Patients and caregivers should be informed that close observation by the prescriber is also suggested. The FDA recommends at least a weekly visit for the first four weeks of treatment as well as when a change in dosage is made. This should be followed by a visit every other week for the next four weeks, a visit at 12 weeks, and regular visits as necessary.12 Ultimately, physicians and parents need to determine if the benefits outweigh the risks of treatment.

There are several possible reasons for suicidal behaviors, including the nature of depression itself. It is also possible that other medications, aside from antidepressants, could trigger these behaviors or add to the effect of the antidepressants. A confounding factor in interpreting studies on this subject is that they do not clearly differentiate between "child" or "young adult."

The FDA, as well as George Washington University Medical Center's Center for Health Services Research and Policy and the ACNP, has concluded that more clinical trials are needed before any conclusions can be drawn regarding the relationship between antidepressants and suicidal behaviors in young people. Since studies to date have evaluated suicidal behaviors only as an adverse event, it is vital that future research uses suicidal behaviors as the focus. Until then, only fluoxetine should be used to treat MDD in children, as it is the only SSRI approved for this age group.8