A variety of neurologic conditions present more often in individuals of advancing age. Among seniors, the majority of seizure disorders are secondary to symptomatic causes (TABLE 1) that are frequently age-related. In some instances, if an underlying etiology is identified and corrected, the patient may not require long-term antiepileptic drug (ED) therapy (TABLE 2).1 In light of the high incidence of polypharmacy among the elderly, drug-induced seizures may be a particular risk for this population. There is a relatively high frequency of epilepsy in the elderly that is now being recognized.1 While new-onset seizures are uncommon in geriatric patients, according to one study the three most common identifiable causes of acute symptomatic seizures in adults were alcohol withdrawal, strokes, and electrolyte disturbances.2 Among all age groups, the most clearly established risk factors for epilepsy are central nervous system (CNS) infections, stroke, and head trauma.1 Specifically in the elderly, cerebrovascular disease is the most common cause of seizure activity, with 10% of patients having epileptic seizures poststroke. 2 The principle strategy in treating epileptic seizures, if possible, is to treat the underlying cause.2 Pharmacists should become familiar with the therapeutic goal of therapy and the potentially avoidable and treatable causes of seizures in the elderly.

Seizure Disorders
Seizures and epilepsies are often referred to by the umbrella term seizure disorders. The term seizure is nonspecific and is the label for a sudden transient change in the function of the brain caused by a variety of conditions.2 Epilepsy is the label used for any CNS disorder that causes a predisposition to recurrent seizures.2 A persistent chronic abnormality is implicated with a diagnosis of epilepsy. Symptoms of a seizure are dependent upon the seizure type. Even though seizures can vary from individual to individual, they tend to be stereotyped within a patient. Generalized tonic-clonic seizures (GTCs), classified as major convulsive episodes, are always accompanied by a loss of consciousness. Complex partial seizures may produce somatosensory or focal motor features and are associated with altered consciousness. Finally, absence seizures can typically appear bland, with extremely brief (i.e., seconds) periods of altered consciousness.1 Between seizure episodes, there are usually no objective signs of epilepsy.1

The most common cause of seizure activity in seniors is cerebrovascular disease, occurring more frequently as a consequence of a hemorrhagic stroke than the nonhemorrhagic type.2 ÜMost early seizures (i.e., <2 weeks) manifest within the first 24 to 48 hours of a stroke, and only a small percentage of patients develops epilepsy.2 ÜIt has been suggested that late-onset epilepsy may be related to clinically silent strokes.

A variety of drugs have been associated with the onset of seizures (TABLE 2) In a hospital-based study, isoniazid and psychotropic medications were the most frequent provocative cause of drug-induced seizures; bronchodilators, insulin, isoniazid, and lidocaine tended to cause multiple seizures.2 The researchers reported GTC seizures in 96% of all patients, while a minority of the seizures were partial with secondary generalization.2

All patients receiving antipsychotic therapy are at increased risk for drug-induced seizures. The risk is increased further if the patient has: 1) a pre-existing seizure disorder; 2) a history of drug-induced seizures; 3) an abnormal electroencephalogram (EEG); and 4) a pre-existing pathology of the CNS or head trauma.3 Seizures associated with antipsychotic agents are more likely to arise upon initiation of therapy and when higher doses or rapid titration are utilized.3 Clozapine and chlorpromazine carry the highest risk potential of all the antipsychotics according to reports, and olanzapine may also be associated with greater risk based on EEG findings.3 If an isolated antipsychotic-induced seizure occurs, anticonvulsant therapy is not recommended; rather, a reduced antipsychotic dosage is advised.3 If a change in antipsychotic is warranted, agents with the lowest potential to lower seizure threshold are recommended (e.g., risperidone, haloperidol, fluphenazine, pimozide, molindone, trifluoperazine, thioridazine).4 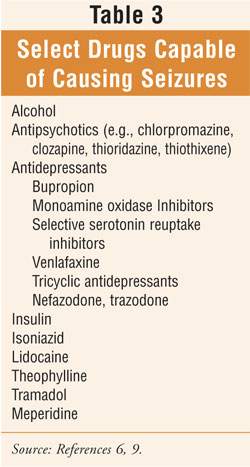 Traumatic Brain Injury
Seizures may occur as a neurological consequence of traumatic brain injury (TBI). In a small percentage of TBI patients, late seizures may develop (>7 days after injury) weeks, months, or even years after the insult.9 Most seizures start within the first one to two years following injury.2 Since prolonged seizure activity may result in increased intracranial pressure and worsen brain damage, it should be prevented, if at all possible, and promptly treated.9 In patients with significant structural damage (e.g., brain lacerations, hematomas), a prophylactic anticonvulsant should be considered (e.g., phenytoin).9 Treatment duration varies, depending on the type of injury and results of the EEG. In general, anticonvulsants should be discontinued within one week if no seizures have developed because the value of anticonvulsant therapy in preventing future seizures is not established; current studies are evaluating newer agents.9

Heatstroke
Hyperthermia, accompanied by a systemic inflammatory response causing multiple organ dysfunction and often death, is referred to as heatstroke. Injectable benzodiazepines (e.g., lorazepam or diazepam) may be used to prevent seizures, which may occur during the cooling phase of treatment for this condition. 9

Dental care for the seizure patient should include the use of chlorhexidine topical rinses (e.g., Peridex, generic) in those who are unable to brush or floss effectively.9 When dental appliances are required, the nonremovable type is recommended to avoid swallowing or aspirating them.9

Treatment
There is clinical controversy regarding the most appropriate time to initiate AED therapy.1 There are clinicians who initiate treatment only after a second unprovoked seizure has arisen. Some clinicians initiate AED therapy after the onset of a first seizure and others utilize treatment prophylactically in patients who have experienced insult to the CNS that will probably evolve into epilepsy, such as a stroke or TBI.1 Specific circumstances and individual patient characteristics usually drive the decisions surrounding appropriate AED treatment on a case-by-case basis.

Ultimately, the treatment goal for epilepsy is no seizures and the absence of side effects with an optimal quality of life.1 When AEDs are used to treat epilepsy in seniors, age-related pharmacokinetic (PK) and pharmacodynamic (PD) changes must be considered. Concurrent medications in the geriatric medication regimen may reduce absorption of certain AEDs, thereby decreasing their bioavailability. 2 Due to an elderly individual's lower concentration of circulating plasma proteins (i.e., albumin), an increase in the free fraction of circulating AEDs with high protein-binding affinities is likely. Because of this, it is usually more beneficial to measure free AED levels rather than routine total AED levels in the elderly.2 There is also a potential for increased AED concentration for a given dose due to a reduced volume of distribution secondary to lower amounts of total body water in older individuals. The volume of distribution for fat-soluble drugs is greater in seniors due to an increased ratio of fat to lean muscle, which may ultimately prolong the elimination half-life of AEDs. Elevated serum half-lives are likely with AEDs that are extensively metabolized by the liver (e.g., carbamazepine, phenytoin, phenobarbital, sodium valproate) due to a reduction in clearance in seniors (i.e., secondary to age-related decreased hepatic mass, blood flow, and cytochrome P-450 activity). Decreased renal clearance in the elderly (i.e., secondary to age-related decreased renal mass, blood flow, and glomerular filtration) may cause problems with newer generation AEDs that are primarily renally excreted (e.g., gabapentin, topiramate). Seniors are typically pharmacodynamically more sensitive to the therapeutic and toxic effects of AEDs.2 In addition to the above-mentioned PK and PD issues, comorbidities and polypharmacy associated with geriatric pharmacotherapy should be considered when an AED is implemented; initial doses should be conservative and titration should be slow. Although it is beyond the scope of this article to discuss the pharmacologic management of epilepsy in detail, the reader is referred to Reference 1 for a comprehensive presentation of the topic.