Several drugs have been withdrawn from the market or have received black box warnings due to their potential to cause QT interval prolongation that leads to fatal ventricular arrhythmias and sudden cardiac death.1,2 Predicting the risks involved with most of these drugs is difficult, since they are often structurally and pharmacologically unrelated. However, a patient's risk of a fatal ventricular arrhythmia may be reduced with the pharmacist's awareness of nonpharmacologic risk factors, drugs known to cause QT prolongation, and specific drug interactions.

QT Interval The QT interval is the length of time required for the heart to repolarize following the onset of depolarization. Ventricular depolarization, expressed as the QRS complex on an electrocardiogram (ECG), is the rapid movement of ions (sodium, potassium, and calcium) across the cellular membrane, creating electrical impulses that lead to ventricular contraction. When the outflow of potassium from the myocardium exceeds the inflow of sodium and calcium, repolarization occurs and is expressed as the T wave on the ECG.

The QT interval is measured on an ECG from the start of the QRS complex to the end of the T wave.1,3 If the ion channels of the myocardium malfunction, most commonly the delayed potassium rectifier channels (IKr), an excess sodium influx or a decreased potassium efflux may result. This surplus of positively charged ions leads to an extended repolarization phase, thus resulting in a prolonged QT interval, causing arrhythmias such as torsades de pointes (TdP), a potentially life-threatening ventricular arrhythmia.1,3 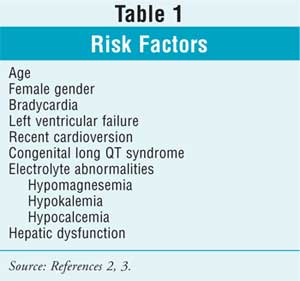 Drugs Commonly Associated with QT Prolongation Antiarrhythmic agents were the first drugs associated with QT prolongation and ventricular arrhythmias. Recently, there has been an increased incidence of arrhythmia caused by noncardiac medications, generating significant concern and, in some cases, withdrawal of these drugs from the market (Table 2).

Antiarrhythmic Agents: Class I antiarrhythmic agents (e.g., quinidine, disopyramide, and procainamide) have frequently been linked to inducing arrhythmia, including TdP.3,4 Reports have estimated that quinidine can cause TdP in 1% to 8% of patients, even at lower doses.4 Sotalol and amiodarone, class III antiarrhythmics, are known to prolong the QT interval by blocking the IKr. However, the risk of TdP with amiodarone is low when compared with sotalol.3,4 Higher drug concentrations of sotalol can lead to QTc intervals that are prolonged by approximately 10 to 40 milliseconds, thereby increasing the incidence of TdP. With the exception of quinidine, the degree of QT prolongation linked to the antiarrhythmics depends on the serum drug level.5

Antimicrobial Agents: Fluoroquinolones, macrolides, and antifungal agents have been associated with prolonged QT interval and TdP. 3 Quinolones are widely used antibiotics frequently prescribed for the treatment of respiratory and urinary tract infections. Ciprofloxacin, levofloxacin, gatifloxacin, and moxifloxacin are the most commonly prescribed fluoroquinolones in the United States.6 Sparfloxacin--the only fluoroquinolone to exhibit activity similar to class III antiarrhythmics--was found to be the most likely of these agents to cause a prolonged QTc interval, leading to its withdrawal from the market.7 Grepafloxacin (not marketed in the U.S.) has also been shown to increase the QTc interval, although not as significantly as sparfloxacin.7 Seventeen case reports of levofloxacin-induced TdP have been published in the literature as of 2005.

Macrolides, specifically erythromycin, exhibit electrophysiologic effects similar to those of the class III antiarrhythmics (amiodarone, sotalol, ibutilide, and dofetilide). Macrolides can prolong myocardial action potential by dispersing electrical activity over the ventricular wall, leading to a prolonged QT interval or TdP. Erythromycin is also an inhibitor of CYP3A4, which poses the danger of significant pharmacokinetic interactions with numerous drugs, most significantly cisapride. 1,4

Antifungals, such as ketoconazole and itraconazole, may have an effect on potassium channels and result in a prolonged QT interval. Antifungals are also potent inhibitors of CYP3A4. Consequently, when medications metabolized by the 3A4 isoenzyme are coadministered with antifungals, the risk for QT prolongation increases significantly.1-4

Antipsychotic Agents: In the past, antipsychotic agents have been linked to an increased risk of sudden death. It has been recently suggested that this risk may be associated with QT prolongation; however, this is difficult to determine without ECG results. The structural difference of the antipsychotics makes it difficult to assess the effects these agents may have on QT intervals.8 Although the exact mechanism by which antipsychotics lead to QT prolongation is unclear, they appear to exert their effects by blocking the IKr potassium channels, leading to delayed repolarization. Interference with sodium and calcium channels is another potential mechanism.8-10 Regardless of the mechanism, QT prolongation associated with antipsychotics appears to be related to the dose and plasma concentration of the drug.

Thioridazine, a phenothiazine antipsychotic that causes significant blockade of the IKr channels, has been associated with QTc prolongation and TdP that has resulted in sudden death. The manufacturer of thioridazine now recommends that its use be restricted to patients who have not responded to other antipsychotics or patients who are experiencing intolerable side effects with other agents.9

Antihistamines: Nonsedating antihistamines were considered potential causes of QT prolongation. Terfenadine and astemizole were found to have proarrhythmic effects, which led to their withdrawal from the market in 1998 and 1999, respectively.11 Although terfenadine was associated with an increased risk of TdP, the active metabolite fexofenadine was not and is now on the market.3,4 Drug interactions affecting the cytochrome P450 system and potential inhibition of the IKr channels are most likely the cause of QT prolongation. Newer nonsedating antihistamines (e.g., loratadine, fexofenadine, and cetirizine) have not been linked to this risk.

Antidepressants: Tricyclic antidepressants (TCAs) and selective serotonin reuptake inhibitors (SSRIs) have also been associated with QT prolongation and TdP. TCAs act on both sodium and IKr channels, which can potentially lead to electrophysiologic changes, such as widening of the QRS complex and QT interval prolongation. When used in combination with drugs that inhibit metabolism, or if overdose occurs, the risk is increased.4,12 Although there have been several case reports associating the risk of QT prolongation and SSRIs, the documentation is limited and appears to occur as a result of pharmacokinetic interaction.

Drug Interactions Both pharmacokinetic and pharmacodynamic drug interactions can significantly increase the risk of QT prolongation. Pharmacists may help reduce the risk of serious ventricular arrhythmias by screening for potential interactions.

Pharmacokinetic: The majority of drugs that potentially prolong the QT interval are hepatically metabolized by the cytochrome isoenzymes CYP3A4, 1A2, and 2D6, with CYP3A4 responsible for the metabolism of approximately 50% of all drugs.13 Most drugs that prolong the QT interval work in a concentration-dependent manner. Furthermore, it is intuitive that inhibiting the metabolism of these commonly associated medications can significantly increase the risk for QTc prolongation or TdP. The drug interactions listed in Table 3 are likely to increase a patient's risk for QTc prolongation, further leading to TdP. For example, prior to terfenadine's withdrawal from the market, the QTc prolongation associated with this drug was estimated to be about 8 to 18 milliseconds. When studied along with the administration of ketoconazole, a 3A4 inhibitor, the QTc interval increased by 82 milliseconds.9 Renal impairment may also increase a patient's risk for QT interval prolongation by the accumulation of drug. 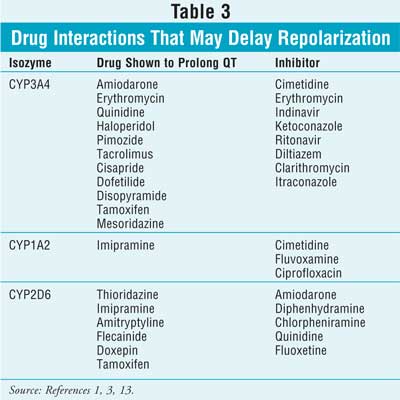 Risks Versus Benefits Risks and benefits should be assessed when selecting medications known to prolong QT interval. Of course, the benefits of certain medications may far outweigh the risks associated with their use. For example, arsenic trioxide, although known to induce arrhythmia, may be necessary for the treatment of acute promyelocytic leukemia. However, it is important to note that generally, in other cases, a safer alternative may be available.

The incidence of QT prolongation and TdP is well documented with the antiarrhythmic agents. Although they are beneficial for the acute termination of an arrhythmia, there has been little documentation supporting their use for chronic management of arrhythmias.1 Thus, the risk of long-term management with antiarrhythmics may outweigh the potential benefits.

As previously mentioned, it is important to assess the nonpharmacologic risk factors (Table 1) when selecting a medication that has been associated with QT prolongation. Close monitoring is particularly necessary when choosing to use QT-prolonging drugs within this population of patients at risk. Patients should be counseled about the potential risks associated with these medications and informed of the symptoms of arrhythmia. Patients should seek medical attention if symptoms such as lightheadedness, dizziness, palpitations, shortness of breath, or syncope occur.

Conclusion Although QT prolongation has been linked to the use of certain drugs, it remains difficult to predict the relative risk associated with their administration. Pharmacists can make recommendations to clinicians to help promote safer prescribing practices when selecting QT-prolonging drugs. Drugs that have QT-prolonging effects should not exceed recommended dosing range, as drug-induced arrhythmia is often a result of high drug concentrations. In addition, these medications should be prescribed with caution in patients who have underlying risk factors, such as cardiac disorders. Screening for potential drug interactions and electrolyte abnormalities may also help lead to safer therapies, potentially preventing the development of ventricular arrhythmias.3