Providing durable medical equipment (DME) can develop into a lucrative and rewarding aspect of a pharmacy's total patient care role. Pharmacies deciding to supply DME should explore the benefits of enrollment in Medicare, which is administered by the Centers for Medicare & Medicaid Services (CMS), working in conjunction with other contractors.1 Legislation determines program requirements, and various regulations and directives clarify the details. Medicare Part B is the section that concerns DME.

While not mandatory, pharmacy enrollment will enable Medicare-covered patients to realize the full benefits of their coverage. Should a Medicare patient purchase or rent DME from a pharmacy not enrolled in Medicare, the government program will not pay the claim.2

Becoming a DME Supplier
A pharmacy wishing to become a DME supplier to Medicare patients must first apply by completing Form CMS-855S (www.cms.hhs.gov/cmsforms/downloads/cms855s.pdf) for all prospective suppliers of Durable Medical Equipment, Prosthetics, Orthotics, and Supplies (DMEPOS).3 After the form with supporting documentation is submitted, it will be processed by the National Supplier Clearinghouse (NSC) to verify all information. A site visit will be scheduled to verify compliance with DMEPOS Supplier Standards, as set forth in 42 CFR 424.57 (http://edocket.access.gpo.gov/cfr_2002/octqtr/pdf/42cfr424.57.pdf).

Accepting Assignment
Pharmacies may ease the burden on their patients by accepting assignment. Assignment is an agreement between the pharmacy and the patient that it will accept the Medicare-approved amount as full payment. After the patient has paid the part B deductible ($135 for 2008), the pharmacy accepting assignment can only collect the coinsurance (usually 20% of the approved amount).1 Pharmacies that make this decision are known as participating suppliers. If the pharmacy is enrolled in Medicare but chooses not to be a participating supplier, it has the option of whether or not to accept assignment. In theory, there is no limit to the amount that pharmacies can charge when they refuse to accept assignment. For this reason, it is incumbent on the nonparticipating pharmacy to make all costs clear in the form of a contract.

Do Chronically Disabled Elderly Underuse DME?
Pharmacies can be more aggressive in promoting the use of DME to patients with severe disability. A severe disability is one that requires an assistive device or presents trouble with at least one activity of daily living.4 As many as 30% to 54% of those over 65 years have such a disability.4 An estimated 75% to 90% of disabled elderly living in the community require some type of assistive technology.5 Wheelchairs and braces are required by 1.5 million elderly patients not living in institutions.4

Researchers examined a group of 4,687 noninstitutionalized elderly Medicare enrollees (average age of 75.6 years).4 Many met the given definitions of disability, yet very few made use of their DME benefit under Medicare. This finding held true for the chronically disabled and for those with a disability of recent onset. This finding is borne out by the fact that over half of patients aged 65 and above who require assistive devices spend their own funds to obtain them.5 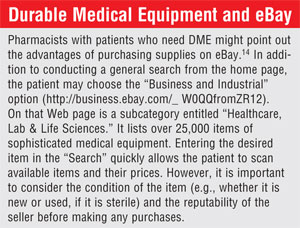 The Controversy Over Power Mobility Devices
Medicare has long been the target of fraud and theft. Pharmacies contemplating entry into the DME market must protect themselves against any hint of fraudulent activity. The official booklet from CMS contains an interesting statement: "Most suppliers who work with Medicare are honest. There are a few who aren't honest. Medicare is working with other government agencies to protect you and the Medicare Program from dishonest suppliers of power wheelchairs and scooters."1 This brief statement is a distillation of a major controversy surrounding the use of two types of power mobility devices (PMDs): power wheelchairs and power-operated vehicles.6

The Department of Justice (DOJ) discussed a 2007 settlement with a leading PMD supplier that promised in its advertisements to give applicants a power chair or scooter "absolutely free" if they completed the company's program.7,8 The DOJ alleged that the company violated the civil False Claims Act and defrauded the United States. Allegedly, the company engaged in an attractive multimedia campaign that enticed consumers to obtain power scooters paid for by Medicare, Medicaid, and other insurers.8 However, the consumer did not receive the "zippy" power scooters that were the focus of the advertisements. Instead, the company sold beneficiaries expensive power wheelchairs. The recipients did not want those devices, did not need them, and/or could not use them. The company allegedly accomplished this by representing to physicians that the patients desired and needed power wheelchairs. The duped physicians filled out thousands of CMN forms, not knowing that they were doing so by means of fraudulent practices.

The company allegedly billed government and private health care insurers for the power wheelchairs and fraudulently collected millions of Medicaid/ Medicare dollars, since the devices are far more costly than power scooters. Power wheelchairs are reimbursed at a rate of $5,000 to $7,000, while power scooters are only reimbursed at $1,500 to $2,000. In addition, many patients were not told about the switch until they received the equipment and discovered it to be far removed from what they had envisioned.8

The DOJ also alleged that the company billed Medicare for new equipment but actually sold used devices, and that it charged Medicare millions of dollars for unnecessary power mobility accessories. The company agreed to settle the allegations by paying $4 million to the U.S. and also by giving up $13 to $43 million dollars in pending claims. 8 A whistleblower, who was a former employee, received over $3 million of the settlement as a statutory award. The Assistant Attorney General stated, "Equipment suppliers whose practices violate the law need to know that we are dedicated to protecting Medicare funds and beneficiaries from their fraudulent schemes." There have been many other instances.9-11

New Competitive Bidding Program
On May 1, 2006, CMS published a proposed rule in the Federal Register to alter the method by which Medicare pays pharmacies and other suppliers by implementing a competitive bidding process for certain covered items of DMEPOS.12 The purpose was stated as: "Competitive bidding provides a way to harness marketplace dynamics to create incentives for suppliers to provide quality items in an efficient manner and at reasonable cost to the program." CMS hoped that the new program might "reduce the amount Medicare pays for DMEPOS and create a payment structure under competitive bidding that is more reflective of a competitive market."13 CMS explained its intention to phase in competitive bidding gradually, perhaps first including those products with the greatest potential for savings. Some of the most expensive items, in decreasing order, were oxygen concentrators, power wheelchairs with programmable features, blood glucose reagent strips (a expense of almost $800 million yearly), semi-electric hospital beds, portable gaseous oxygen equipment, enteral formulas, enteral feeding kits, lancets, and nebulizers.

On April 10, 2007, CMS published its Final Rule on the competitive bidding proposal.13 The agency discussed the 2,129 comments it had received on the proposed rule. Despite many comments disagreeing with certain provisions of the proposed rule, CMS finalized the rule and planned for its implementation. Beginning July 1, 2008, CMS will implement the new Competitive Bidding Program in specific geographic areas. The first phase of the program will affect pharmacies and other suppliers in: Charlotte-Gastonia-Concord (North and South Carolina); Cincinnati-Middletown (Ohio, Kentucky, Indiana); Cleveland-Elyria-Mentor (Ohio); Dallas-Fort Worth-Arlington (Texas); Kansas City (Missouri, Kansas); Miami-Fort Lauderdale-Miami Beach (Florida); Orlando (Florida); Pittsburgh (Pennsylvania); Riverside-San Bernardino-Ontario (California); and San Juan-Caguas-Guaynabo (Puerto Rico).1 Suppliers who are unsure whether their zip code is included in the new Competitive Bidding Program may call 1-800-MEDICARE. Information on the new program is also available at www.medicare.gov.

Being Trained in DME
As can be seen by this discussion, a major consideration in supplying DME is ensuring compliance with Medicare regulations. There are many other considerations, however. The pharmacists and staff involved in the practice should obtain training to understand the various difficulties involved in DME sales. The manufacturers often have sophisticated educational programs in place. If the pharmacy proposes to enter the ostomy market, for instance, it is recommended that the manufacturers of these products be contacted to ascertain the various educational efforts that are already available. With appropriate training, this potentially lucrative area can allow the pharmacy DME supplier to assume an enhanced role in the community. 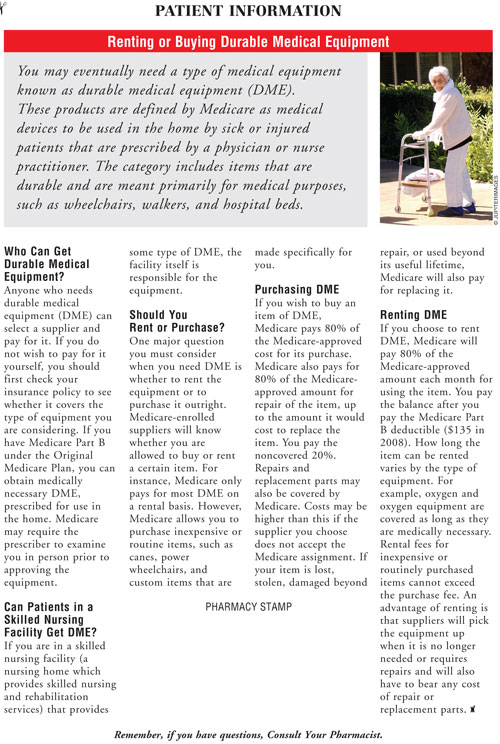