Blood clotting is a very complicated process. Approximately two million Americans require warfarin to prevent blood clotting after a stroke, heart attack, fracture, or surgery, or for long-term therapy in the treatment of atrial fibrillation.1 The appropriate dose of warfarin can vary greatly from patient to patient and is often difficult to predict.1-3 If the dose is too low, blood clots may develop, and if the dose is too high, it can result in excessive bleeding. Bleeding is the most common complication of anticoagulation therapy with warfarin, contributing to medication-related emergency department visits, morbidity, mortality, and increased health care expenditures. Age greater than 65, comorbidities (see Table 1), and a history of gastrointestinal bleeding or stroke are associated with the greatest risk of bleeding.4 Patients with two or three risk factors have a much higher incidence of warfarin-associated bleeding, compared to those with none or one.4 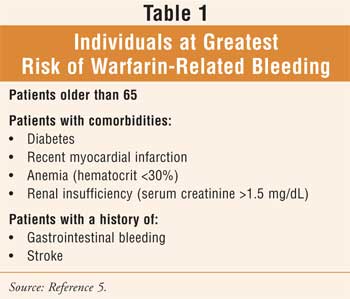 The risk of medication-related adverse events in the elderly increases exponentially as the number of medications in the regimen increases--due, in part, to polypharmacy--reflecting the presence of comorbidities and the increased risk of drug and disease interactions. Additionally, patients can further increase the risk of complications when they self-medicate with OTC medications (e.g., aspirin, ibuprofen, naproxen) and alternative therapies (e.g., ginkgo biloba) that are known to increase the effect of warfarin.5,6

Pharmacists are actively involved in warfarin monitoring and continue to counsel older patients on how to best avoid side effects and medication interactions. It is important to warn seniors and their caregivers that the elderly may respond differently to alternative therapies than do younger individuals, especially since more than 50% of older people who use alternative therapies do not report the use of such therapies to their physician.7 In general, lower warfarin loading (<7.5 mg) and maintenance (usually <5 mg/day) doses are recommended for elderly patients.8 It is important to recognize that in all cases, it is a manipulation of the balance of risks.9 When warfarin is temporarily stopped (e.g., prior to a surgical procedure), elderly patients may achieve reversal to normal clotting function more slowly than younger patients.8

Most hospitals provide a warfarin clinic, which delivers outpatient services for dosing warfarin using the standard "trial and error" basis. Clinicians use information primarily about a patient's sex, age, weight, and medical history to establish the initial warfarin dose. While several computer programs have been developed to guide warfarin dosing, patients usually experience several months of clinic appointments and blood sampling to determine an ideal dose; ongoing dosage adjustments are based on close monitoring. Adherence to dietary and lifestyle restrictions, as well as avoidance of medication (prescription and OTC) interactions, is also required in an attempt to avoid fluctuations in the international normalized ratio (INR).

While age does not alter the pharmacokinetics of warfarin, it may have an effect on warfarin response in seniors by increasing the prothrombin time or INR.8 This may occur as a result of an elderly individual's increased sensitivity to the anticoagulant effect of warfarin.5 Additionally, other factors (e.g., genetic, environmental, developmental) may result in variations in medication response among patients.5

The observed variability in patient response to a particular medication may be due to genetically determined differences in drug distribution, drug target proteins, and drug metabolism.10 Developing a genetically based dosing protocol for these patients could prevent dangerous complications that result in tens of thousands of hospitalizations and deaths each year. Through the use of technology to determine genetic information, future personalizing or tailoring warfarin dosing is predicted to save an estimated 1.1 billion in health care dollars in the United States each year.11

Tests are already commercially available for several enzymes whose variations result in different drug responses, including two members of the cytochrome P450 family--CYP2D6 and CYP2D9.12 Additionally, the FDA has started to include pharmacogenetic considerations in the prescribing information for some drugs.12

Pharmacogenetics and Warfarin
The term pharmacogenetics refers to variations in medication response secondary to genetic makeup. A pharmacogenetic variation, causing reduced warfarin activity, may be due to a genetically controlled reduction in binding affinity of the warfarin receptor.5 Furthermore, about 10% of the difference in people's responses to warfarin is attributed to variations in a gene encoding the CYP2C9 enzyme, which metabolizes warfarin; tests for these genetic variations, however, are not routinely performed.2 The recently identified gene vitamin K epoxide reductase, or VKORC1, is a key component in the clotting process and the primary target of warfarin. 13

A retrospective study funded by the National Institute of Environmental Health Sciences, the National Heart, Lung, and Blood Institute, and the National Institute of General Medical Sciences revealed that genetic variations may influence a patient's response to warfarin, according to findings published in the New England Journal of Medicine.1,3,13 Patients from clinics at the University of Washington in Seattle and Washington University in St. Louis participated in the study. Researchers analyzed the genetic information from patients taking warfarin and found that they fell into three dosage groups: low, intermediate, and high.1,14 Genetic variations correlated with the dosage groups, suggesting that the findings hold promise for streamlining warfarin therapy.1,14 According to the lead researcher, the VKORC1 gene appears to be the largest genetic variation affecting warfarin, and it accounted for 25% of the overall variation in warfarin doses in these studies.1,14 This study is one of the first to show a major effect of genetics on the varying levels of medications that patients require.1,13 The results are promising for simplifying warfarin therapy by strategizing a more precise dosage range of warfarin that is needed at the initiation of therapy and for eliminating many follow-up tests.1,14

The study team also discovered that specific population groups tended to have a higher prevalence of a particular VKORC1 variation.1,12 Asian Americans generally had the low-dose variation or genotype, African Americans had the high-dose genotype, and European Americans fell somewhere in the middle.1,3,13

The scientists recommended that, because the studies were conducted among patients who already were taking stable doses of warfarin, further studies are necessary in which the choice of the initial dose of warfarin is based on identification of the genetic variations.1,14

Prospective Clinical Studies
The impetus for prospective studies in a clinical setting has been noted. We will soon have further infor­ mation to help determine whether knowledge of genetic variation impacts positively on patient treatment with warfarin. Five teaching hospitals affiliated with Harvard Medical School have begun a study to increase the percentage of patients who receive the optimal warfarin dose.11 In Wisconsin, the Marshield Clinic Research Foundation will conduct a new study that will compare results between patients receiving warfarin via standard "trial and error" dosing and those who receive genetic-based dosing. 11 A joint effort between prescription benefit manager Medco and the Mayo Clinic's Center for Individualized Medicine will entail sending results of genetic testing of patients with atrial fibrillation directly to their respective physicians to ultimately facilitate the adoption of a more tailored dosing strategy. 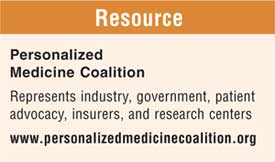 Clinicians continue to find warfarin challenging to prescribe, despite its widespread use. Through the use of technology to determine genetic information, future personalizing or tailoring of warfarin dosing is estimated to save over a billion health care dollars in the U.S. each year. Researchers recommend that genetic analysis of VKORC1 be an essential component of future prospective studies focusing on investigating the value of genotyping for warfarin therapy. Prospective, clinical study is now underway at multiple study sites. As scientists accumulate more evidence and a better understanding of the genes associated with varied medication responses, additional testing methods for relevant gene variants will be developed. Pharmacogenetics will eventually shift from the laboratory to clinical practice, with the goal of tailored dosing based on a patient's individual characteristics.