Pharmacists should be familiar with the legal issues involved when they dispense a drug manufactured by a company other than the one that makes the brand name of the prescribed drug. This activity goes by many names: "drug product selection," "generic substitution," "generic drug interchange," and probably a few others. For simplicity, the term "generic substitution" will be used hereafter. Pharmacists should also recognize the federal government's role in regulating these activities. Finally, pharmacists must be familiar with the state laws affecting these practices. While there is significant variation between the different state laws, the laws can be categorized into just a few types. This article will address each of these subjects.

Before proceeding, it is essential to gain an understanding of some terminology. The terms important to generic substitution are summarized in TABLE 1.1 The FDA classifies as therapeutically equivalent products that are approved as safe and effective; are pharmaceutical equivalents (i.e., contain identical amounts of the same active drug ingredient in the same dosage form and route of administration and meet compendial or other applicable standards of strength, quality, purity, and identity); are bioequivalent (i.e., do not present a known or potential bioequivalence problem and meet an acceptable in vitro, or in some cases in vivo, or both, standard--or, if they do present such a known or potential problem, are shown to meet an appropriate bioequivalence standard); are adequately labeled; and are manufactured in compliance with current Good Manufacturing Practice (GMP) regulations.2 Products that meet these criteria are considered therapeutically equivalent even though they may differ in certain other characteristics such as shape, scoring configuration, release mechanisms, packaging, excipients (including colorings, flavorings, and preservatives), expiration date/time, minor aspects of labeling (e.g., presence of specific pharmacokinetic information), and storage conditions. The FDA takes the position that when differences of these types are important in the care of a particular patient, it may be appropriate for the prescribing physician to require that a particular brand be dispensed ("dispense as written") as a medical necessity ("brand medically necessary"). With this limitation, however, the FDA believes that products classified as therapeutically equivalent can be substituted with the full expectation that the substituted product will produce the same clinical effect and safety profile as the prescribed product. 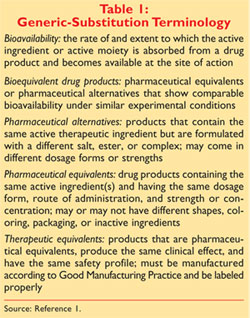 Bioavailability testing is used to determine whether one drug product has the same effect as a generic equivalent. Bioequivalence can be determined through one of four mechanisms: pharmacokinetic studies, pharmacodynamic studies, comparative clinical trials, or in vitro studies. The last three of the aforementioned are used to test drug products in which plasma levels are not affected, such as nasal sprays, aerosols, and topical medications.3 Pharmacokinetic studies test bioequivalence by measuring plasma levels to determine the rate and extent of absorption. These tests are conducted with 24 to 36 volunteers, and single doses of test and reference (or standard or innovator) drugs are administered. If two drug products containing the same active chemical entity can reach the site of absorption in similar times and be absorbed to the same extent, bioequivalence can be established. The bioequivalence ranges measured by pharmacokinetic parameters are between 80% and 125%.4 This means that if the generic version of the reference product shows 20% less absorption or up to 25% more absorption, the products will be deemed bioequivalent and, in FDA terms, presumptively therapeutically equivalent.

Federal Regulations
Most pharmacists already know that the Orange Book, created in 1980 and now in its 28th edition, is an FDA publication that lists many drug products and contains indications as to whether generic versions of medications are considered to be "equivalent" to the drugs manufactured by the innovator company and most often marketed with brand names. Pharmacists, however, might not recognize the limitations inherent in the Orange Book evaluations. What is commonly called the Orange Book is really entitled Approved Drug Products with Therapeutic Equivalence Evaluations. (In the days when books were published only in hardcover format, this text was bound with an orange cover, hence its popular name; in these days of Internet publications, the online version is usually referred to as the Electronic Orange Book.5 ) One of the more significant limitations of this federal publication comes directly from the first part of its formal name: Approved Drug Products. The only drugs listed in this book are those that have been approved by the FDA as so-called new drugs.6 The FDA does not list drugs that are on the market without a new drug approval (NDA). Some drugs are still being marketed in the United States without the benefit of an NDA because they were on the market before the original Federal Food, Drug, and Cosmetic Act (FDCA) took effect in 1938.7 These pre-1938 drugs were said to have been "grandfathered," meaning that they could remain on the market without the manufacturer's having to produce data showing that the drug was "safe" for its intended purposes.8 In fact, the preface to the Orange Book states: "Drugs on the market approved only on the basis of safety (covered by the ongoing Drug Efficacy Study Implementation [DESI] review [e.g., Donnatal ® Tablets and Librax® Capsules] or pre-1938 drugs [e.g., Phenobarbital Tablets]) are not included in this publication." 9 The DESI reference applies to drugs that were put on the market after 1938 but before 1962, when the FDCA was amended to require manufacturers to submit to the FDA satisfactory data showing that their drug is effective (as well as safe) for its intended purposes.10 Often called the Drug Efficacy Amendment, these provisions also established GMP requirements and significantly modified the clinical phases of drug testing.

It is important to note that exclusion from the Orange Book does not imply that a drug is not safe and effective or that it is not therapeutically equivalent to other similar drug products. In point of fact, exclusion means only that the FDA has not evaluated the safety, effectiveness, or quality of the excluded drug.11

The proper status of the Orange Book contents as a legal source for pharmacists engaged in generic-substitution decisions is somewhat complicated. The FDA makes special note that the publication is not an official, legally binding regulation. 12 The FDA explicitly states that the listing of drugs with therapeutic equivalency constitutes advice and that it does not mandate which drug products may be prescribed, dispensed, or substituted for one another.13 It also draws a clear distinction between therapeutic-equivalence evaluations and generic substitution. Equivalence evaluations "are a scientific judgment based upon evidence, while generic substitution may involve social and economic policy administered by the states, intended to reduce the cost of drugs to consumers."14

State Laws
These disclaimers aside, many states have elevated the Orange Book lists to legal status by indicating that drugs the FDA deems to have equivalencies may be substituted or, conversely, that drugs the FDA does not list as having equivalencies cannot be substituted. All states in the U.S. have laws addressing generic substitution to one degree or another. There are "positive formulary" states, which identify generics that can be substituted, and there are "negative formulary" states, which list drugs that cannot be substituted. There are also states that do not refer to Orange Bookstandards and have nether a positive nor a negative formulary, and where pharmacists are permitted to perform generic substitution so long as the drugs are pharmaceutically equivalent. See TABLE 2, which identifies which laws apply in which states.15-17 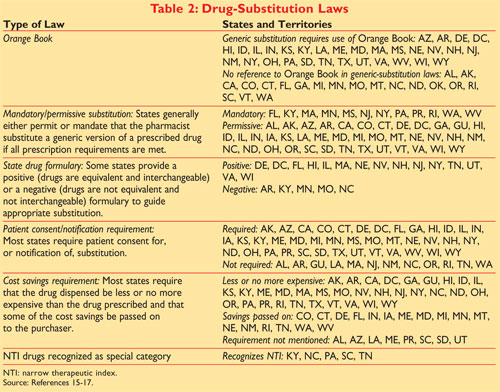 Some states have unique laws about substituting drugs. In Oklahoma, for example, the law states that it is unlawful for a pharmacist to substitute any like drug, medicine, chemical, or pharmaceutical preparation without the authority of the prescriber or purchaser.18 In Hawaii, it is unlawful for pharmacists to substitute an equivalent generic product for any antiepileptic drug without practitioner and patient consent.19 In Florida, each community pharmacy must establish a formulary of generic and brand-name drug products that, if selected as drug product of choice, would not pose a threat to the health and safety of patients receiving prescription medication.20 In Iowa, the Board of Pharmacy advises use of the Orange Book to determine therapeutic equivalency.21 The Kentucky Board of Pharmacy maintains a list of narrow therapeutic index (NTI) drugs that cannot be substituted, including digitalis glycosides, antiepileptic drugs, antiarrhythmic agents, conjugated estrogens, esterified estrogens, warfarin anticoagulants, theophylline products, and thyroid preparations.22 Likewise, the North Carolina Board of Pharmacy maintains a list of NTI drugs that are not to be substituted. The 2007 list of NTI drugs includes: carbamazepine (all oral dosage forms); cyclosporine (all oral dosage forms); digoxin (all oral dosage forms); ethosuximide; levothyroxine sodium tablets; lithium (all salts, all oral dosage forms); phenytoin (all salts, all oral dosage forms); procainamide; theophylline (all salts, all oral dosage forms); and warfarin sodium tablets.23 The Pennsylvania Board of Pharmacy also maintains a list of NTI drugs that are not to be substituted.24 In South Carolina, the Board recommends not substituting three types of medications, "1) including narrow therapeutic index drugs, e.g. lithium); 2) Premarin or Synthroid; and 3) ‘Critical drugs' in the following categories: anticoagulants, anticonvulsants, anti-asthmatics (especially time-release products), insulin, and cardiac glycosides."25 In Tennessee, "a pharmacist may substitute A-rated products and use his judgment on unrated products except for antiepileptic drugs used to treat patients with epilepsy or seizures."26

It is interesting that certain states recognize NTI drugs and have prohibitions, to some extent, about substituting products in this category. Even more curious is that the FDA has adopted the position since at least 1997 that NTI drugs do not need to be regulated any differently than other classes of drugs.27 Nevertheless, in 1995 the FDA developed a list of NTI drugs for purposes of determining which types of studies should be done with specific dosage forms to make bioequivalence determinations.28 The drugs identified by the federal government as NTI drugs are given in TABLE 3. In 1990, the Acting Commissioner of the FDA stated in a letter to the Pennsylvania Department of Health that the FDA does not formally designate NTI drugs in the Orange Book or elsewhere. 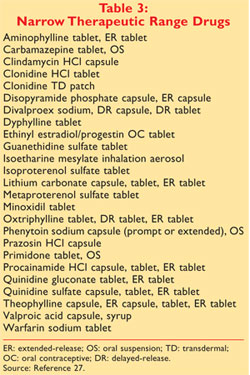 Conclusions
Pharmacists are given significant responsibility by both federal and state government to help control drug costs by making effective generic-substitution choices. Knowing when not to perform generic substitution is an equally important task. The FDA has taken much of the guesswork out of evaluating whether two drugs may be substituted for one another with publication of the Orange Book. Not all drugs legally marketed in this country are included in that text, however. Nonetheless, unrated drugs may be substituted if the relevant criteria are met. States take different approaches to the regulation of generic substitution. Pharmacists must be familiar with the laws governing the states where the practice of pharmacy is conducted.