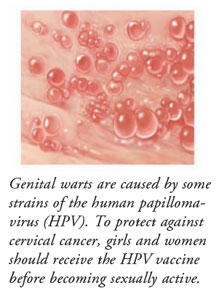 HPV infections are common in both men and women and do not cause symptoms. Most often, these infections go away without treatment in patients who have normal immune systems. Scientists have known for some time that certain types of HPV (notably, types 16 and 18) are linked to precancerous changes of the cervix and eventually result in 70% of all cervical cancers. Other HPV types (primarily types 6 and 11) are known to cause 90% of all genital warts in both men and women.

Until now, the only defense against cervical cancers caused by HPV has been the annual Pap smear—a test that will show if there are abnormal cells on a woman’s cervix. Annual Pap smears allow the doctor to identify cell changes far in advance of the development of cervical cancer. If a woman has an abnormal Pap smear, a test for HPV can determine if a virus is present and which virus is causing the infection. Follow-up Pap smears every four to six months may be recommended to watch for further cell changes.

Gardasil is a recently approved HPV vaccine that prevents infections with HPV types 6, 11, 16, and 18. This vaccine must be given before HPV develops, so it is recommended for girls and women before they become sexually active (ages 9 to 26 years). Gardasil has been proven very effective in preventing HPV infections from the four types of HPV listed above, but it does not protect a woman against all of the HPV infections that can cause cervical cancer. An HPV vaccine cannot cure an existing HPV infection, nor can it treat cervical cancer. The discovery of a vaccine that can prevent the vast majority of cervical cancer cases is an exciting step in cancer prevention.

A Preventable and Treatable Virus

There are approximately six million people in the United States each year who develop a genital HPV infection, but most of these infections will disappear within a year or two without treatment. Sometimes, an HPV infection of the cervix will linger for a longer period of time and may (or may not) lead to precancerous changes in the mucosal tissue cells of the cervix. HPV infections have also been related to vulvar and vaginal cancers, anal cancer, cancer of the penis, and other cancers of mucosal tissues in the mouth and throat. It is estimated that nearly 500,000 women around the world will be diagnosed with cervical cancer this year; of those, 10,000 cases will affect American women. Close to 50% of these cancer cases will be fatal.

Genital Warts: Although both men and women can develop genital warts, the HPV viruses that cause these warts are considered to be at low risk of progression to precancerous and cancerous tumors. However, to avoid spreading HPV, genital warts that are apparent should be treated before continuing sexual activity.

New HPV Vaccine: Currently, the HPV vaccine is approved for use in girls and young women ages 9 to 26. It is most effective when given before a female is sexually active. It is administered in three doses—one every six months—over a 12-month period. At this time, the vaccine is known to provide protection from its target HPV viruses for at least a four-year period. Research is being done to determine how long immunity will last and whether a booster shot of the vaccine will be required later in life. Although the vaccine was studied in boys and was found to be safe, it is not yet known whether it will work to prevent genital warts or anal or penile cancers. The HPV vaccine was tested in thousands of people prior to its approval, and it was found to be both safe and effective. Side effects of the vaccine are mild tenderness in the area of injection.