Tobacco use among adolescents increases the risk of smoking-related disease and premature death (more than five million of today's adolescent smokers will die from tobacco-related disease). Alcohol use is associated with motor vehicle accidents, school and workplace problems, fighting, and crime; early onset of heavy drinking (five or more alcoholic beverages in a row or on a single occasion in the past two weeks) increases the likelihood. Cocaine use is linked to eating disorders, heart attacks, and strokes. Marijuana use poses cognitive and other health risks, including damaged pulmonary function from chronic use. Hallucinogens can affect brain chemistry and impair memory and learning. Early sexual activity is associated with emotional and physical health risks. The following data from the Centers for Disease Control and Prevention are especially important in light of these consequences. 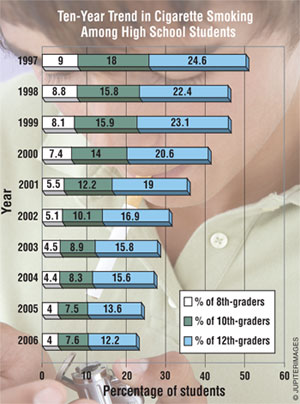