Infectious mononucleosis (IM) was first described in 1889 as glandular fever, a clinical illness characterized by fever, fatigue, abdominal discomfort, hepatosplenomegaly (enlargement of both the liver and spleen), and lymphadenopathy. Later observations linking the appearance of atypical lymphocytosis helped to establish IM as a clinical entity.1 It was not until 1968 that IM was linked to the Epstein-Barr virus (EBV).2 EBV is one of the most ubiquitous human herpes viruses, and it is associated with more than 90% of cases of IM.1

Epidemiology
In the United States, more than 90% of adults between the ages of 35 and 40 test positive for EBV and carry the virus in a latent state for life.2,3 Epidemiologic studies have shown that in nonindustrialized countries primary infections occur earlier in life, while in developed countries seroconversion occurs more frequently during adolescence.1,4 When primary infection occurs during childhood, it often remains asymptomatic and undetected.1,4 Clinical symptoms are present in 35% to 50% of cases affecting adolescents and young adults.3

IM affects 45 in every 100,000 people, with peak incidence typically occurring between the ages of 15 and 25 years.1 Incidence in the college student population has been rated around 15%.5 No gender differences or seasonal prevalence has been observed.1

EBV infects and replicates primarily in the B lymphocytes and epithelial cells of the oropharynx and confers a lifelong latent infection.4 EBV is often found in the saliva of infected persons and spreads to susceptible individuals by close contact such as kissing. Therefore, IM became known as the "kissing disease." 1,3 EBV has limited viability outside the body and its spread by contact with contaminated personal objects or eating utensils is not clear. The Centers for Disease Control and Prevention does not recommend any special precautions since the virus can be found even in the saliva of healthy individuals.2,5 Reports of transmission through blood transfusions can also be found.5 Although not conclusive, data suggest that EBV can be transmitted through sexual intercourse, and having an increased number of sexual partners poses a significant risk factor to seroconversion.4,6 Incubation period for IM is usually between 30 and 50 days.6

Infectious mononucleosis is characterized by fever, pharyngitis, splenomegaly, and generalized lymphadenopathy (TABLE 1). Often the full clinical syndrome is preceded by three to five days of prodromal symptoms consisting of headaches, fatigue, and myalgias.5

Fever usually ranges between 39.4C and 40.6C and can last for one to two weeks.7 Sore throat has been reported to be present in more than 85% of patients.8 Enlarged tonsils with exudate are commonly found. These clinical findings can easily be mistaken for group A streptococci pharyngitis.7

Lymphadenopathy occurs in more than 90% of patients with IM and affects mostly the anterior and posterior cervical lymph nodes.6,7 The lymph nodes are symmetrical and only moderately tender on palpation.2 Lymphadenopathy gradually resolves within two to three weeks.7,8

Lymphocytic infiltration of the spleen leads to splenomegaly in as many as 50% to 63% of patients with IM. Massive spleen enlargement and spleen rupture are rare but severe complications of IM.5-7 Hepatomegaly is present in only about 10% of patients, and mild-to-moderate elevation of hepatic transaminases and bilirubin can also be found.1,5,7

Skin manifestations like rash have been reported in 3% to 19% of cases of IM.7 Rash can be macular, papular, erythematous, or morbilliform and typically affect the trunk and arms.1,7 The concurrent administration of the antibiotics ampicillin and amoxicillin has been implicated in the occurrence of a pruritic, maculopapular rash in 90% to 100% of patients.1,7 It can persist for up to one week and does not represent hypersensitivity to these drugs.1,7

Confirmation of the diagnosis can be aided by laboratory examination (TABLE 1). The white blood cell count often varies between 10,000 and 20,000 cells/mm3 with a predominance of lymphocytes and monocytes up to 60% to 70%.1,6 Atypical lymphocytes are characteristic of IM. These cells are usually larger with a lower nuclear-to-cytoplasm ratio than the mature circulating lymphocytes.1,6 Although very common in IM, atypical lymphocytes can also be found in other viral infections such as cytomegalovirus, toxoplasmosis, rubella, and hepatitis, among others.1,6 Platelet count can also be decreased but rarely drops below 50,000/mm3, and purpura is rare.6

Heterophile antibodies are present in 90% of IM cases and are both very sensitive and specific for the disease. These antibodies were first described by Paul and Bunnell and are IgM immunoglobulins that agglutinate sheep and horse red blood cells. These antibodies can be demonstrated in high titers during the first month of the illness and gradually decrease over the following four to six months. 1,3,7

Heterophile antibodies are the basis for a commercial test kit known as the "monospot test." The specificity of the monospot test is very high, approaching 90%. However, sensitivity is variable with a high false-negative rate in children less than 10 years old and during the first week of the onset of illness.2,3 The monospot test can detect heterophile antibodies in 70% to 90% of adolescents and adults and is useful to confirm clinical diagnosis.2 In patients with a negative monospot test but with clinical symptoms indicative of IM, other heterophile-negative mononucleosis-like illness should be ruled out. The most common causes of heterophile-negative mononucleosis-like syndrome are cytomegalovirus, viral hepatitis, acute toxoplasmosis, group A beta-hemolytic streptococci, and HIV-1 infections.1,2 Other serologic tests that detect antibodies against EBV's capsid (IgM VCA) can aid final diagnosis in selected cases.1,2

Treatment
IM is a self-limited disease, and spontaneous recovery occurs in more than 95% of cases. Supportive care with symptom relief, rest, and good hydration is the mainstay of therapy.1,7

Analgesics and antipyretics such as acetaminophen and nonsteroidal anti-inflammatory agents are recommended for fever and pain relief. Saline gargles may be useful to alleviate sore throat.1

Several trials have investigated the use of antiviral agents in the treatment of mononucleosis. A trial of 94 patients randomly assigned to receive either oral acyclovir and prednisolone or placebo for a total of 10 days failed to show any significant effects on the duration of clinical symptoms.12 Significant decrease in oropharyngeal EBV shedding was demonstrated in the same study and corroborated by others.12-14 A meta-analysis of five randomized controlled trials that included 339 patients treated with acyclovir showed no clinical benefit of acyclovir when compared to placebo. Inhibition of viral shedding at the end of therapy was shown, but the effect was lost three weeks after withdrawal of therapy. The authors concluded that there are no clinical data to support the use of acyclovir for the treatment of IM.15 Most symptoms associated with EBV infection result from the vigorous body immune response against EBV, and that might explain the lack of efficacy of antiviral agents that work by inhibiting viral replication during the lytic phase of the infection.1

Complications
The majority of patients with IM fully recover over a period of weeks to a few months.16 Nevertheless, cases of complications have been reported widely in the literature.

Spleen Rupture and Restricted Activity: Splenomegaly is a common clinical finding in IM, and spleen rupture is a rare but potentially life-threatening complication in adolescents and young adults. It is estimated to occur in 0.5% of cases.5,16,17 Most spleen ruptures occur following even mild abdominal trauma and are more likely to occur between day 4 and 21 of the illness.17 Lymphocytic infiltration with spleen enlargement may compromise normal anatomy and supportive structures leading to spleen fragility.17 Rest should be enforced and physical activity restricted with avoidance of all contact sports. 5,17 Complains of abdominal pain should be taken seriously and spleen rupture suspected. Onset of pain may be acute or insidious and usually affect the left upper quadrant and radiate to the left shoulder. The patient may present in shock with a falling hematocrit.1

The duration of restricted physical activity and the decision of when to return to sports is highly controversial and can significantly impact the quality of life of patients, who are often highly active young adults frequently involved in competitive athletic activities. Physical examination with splenic palpation is generally unreliable, with one study reporting only 17% of splenomegaly being detected upon physical examination.10 The use of imaging studies (ultrasound, CT scanning, MRI) may be used to help document resolution of splenomegaly; however, cost and lack of standards limit their usefulness. 17 Generally accepted practices recommend that all strenuous activity, including weight lifting and contact sports, be avoided during the first three weeks of illness. A gradual return to noncontact aerobic activity can be initiated on week 4 as long as patients are asymptomatic, well hydrated, and with no palpable spleen.5,17 For more strenuous activity, a minimum of four weeks is recommended.17

Airway Obstruction: One of the most common complications of IM is airway obstruction secondary to tonsil swelling and nasopharyngeal edema. It affects approximately 5% of patients and often leads to hospitalization.6,15 Treatment includes supportive care with administration of IV fluids, head of bed elevation, and use of systemic corticosteroids.6,16

Hematologic Complications: Transient mild thrombocytopenia is present in half of cases of mononucleosis but rarely is severe enough to cause bleeding.16 Hemolytic anemia has been reported to occur in 0.5% to 3% of cases. Hemolysis is generally noted during the second or third week and resolves in four to eight weeks. 1 There is some evidence that both thrombocytopenia and hemolytic anemia are mediated by auto-antibodies. In the more severe cases, corticosteroids may be tried to hasten recovery.1 Mild neutropenia is common, but neutrophils below 1,000 cells/mm3 are present in 3% of cases, lasting from a few days to two weeks.16

Fatigue: The first two to four weeks of illness are often marked by severe fatigue. Malaise and mild fatigue can last up to several months. There is no convincing evidence confirming the link between EBV infection and chronic fatigue syndrome.6,1

EBV-associated Malignancies: More than 90% of the adult population who are infected with EBV carry the virus for life as latent infection of the B lymphocytes without any adverse events. 2,3 However, in immunosuppressed individuals (i.e., transplant or AIDS patients) or in individuals with environmental and/or genetic factors, it can rarely result in malignancy. Lymphoproliferative disease, Hodgkin's and Burkitt's lymphoma, and nasopharyngeal carcinoma have also been associated with EBV.1,

Others: Liver enzymes are elevated two to three fold in 90% of IM cases, but jaundice is uncommon.16,18 A list of other reported complications can be found in TABLE 2. 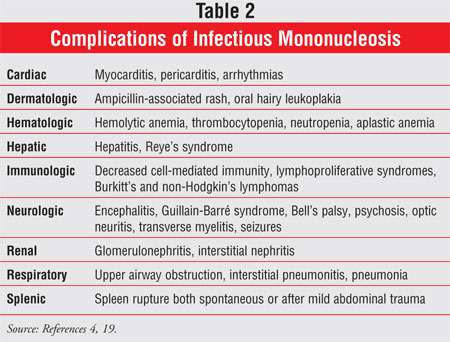 Summary
Infectious mononucleosis is a clinical syndrome characterized by fever, pharyngitis, lymphadenopathy, and atypical lymphocytosis. It is caused by the Epstein-Barr virus and primarily affects adolescents and young adults. Primary infections acquired during childhood are usually asymptomatic. Transmission occurs by close contact with saliva of infected individuals. Final diagnosis can be made by a positive monospot test confirming the presence of heterophile antibodies, although the monospot test is unreliable during the first week of illness and in young children. Treatment consists of supportive care ensuring appropriate hydration, rest, and use of analgesic/antipyretic agents for symptom relief. Corticosteroids should be reserved for complicated cases with respiratory compromise, severe thrombocytopenia, and hemolytic anemia. There is no role for antivirals in the treatment of IM. Restricted physical activity with avoidance of all contact sports and weight-bearing activities should be enforced during the first three weeks after onset of symptoms to decrease the risk of spleen rupture. Gradual return to athletic activities should be individualized based on symptoms and clinical exam. The prognosis for IM is good, with low incidence of complications. Acute symptoms usually resolve in two to three weeks, but mild fatigue may persist longer.