Monoamine Oxidase Inhibitor Warnings
In the late 1970s, a specific group of medications was indicated for depression or hypertension: monoamine oxidase inhibitors (MAOIs). At that time, several were actively marketed as single-entity or combination products, including pargyline (Eutonyl) and pargyline/methyclothiazide (Eutron) for hypertension and phenelzine (Nardil), tranylcypromine (Parnate), and isocarboxazid (Marplan) for depression. Eventually, selegiline (Eldepryl, Emsam) was marketed, with enhanced affinity for MAOI type B active sites. It was referred to as an MAOI "B" medication, and the older products became known as MAOI "A" medications. Eutonyl, Eutron, and Marplan are no longer marketed.

Regarding MAOI therapy, one set of precautions is paramount. MAOIs block the body's ability to metabolize tyramine, carrying a high potential for drug and food interactions. Patients prescribed MAOIs are cautioned strongly against ingestion of tyramine-rich foods and drinks, such as anchovies, certain alcoholic beverages (e.g., sherry, beer), pepperoni, salami, strong/aged cheeses, raisins, bananas, and soy sauce. Failure to observe this precaution can cause cerebral hemorrhages and severe headaches.

In 1992, the FDA became aware of an additional issue regarding MAOIs. Dextromethorphan was found to be a possible cause of a potentially deadly interaction in patients taking MAOIs.3 Among the numerous cases reported, a 26-year-old female had been taking 15 mg of phenelzine four times daily for a month but took a 30-mg dose after she missed an earlier one. She also ingested 2 oz. of a dextromethorphan-containing cough syrup, which led to nausea, dizziness, and collapse. She was severely hypotensive when taken to the hospital, with a systolic that did not rise above 70 mmHg and a temperature of 107.6 to 107.96° F. She died of a cardiac arrest four hours postadmission.

The FDA Panel assigned to review anorectal products recognized in its 1980 report that topical vasoconstrictors in hemorrhoid products (e.g., phenylephrine) could be absorbed in sufficient quantities to interact with MAOIs.5 The FDA-required label for these products is not as complete as the labels above, stating only, "Ask a doctor or pharmacist before use if you are presently taking a prescription drug for high blood pressure or depression."6 Furthermore, the label ignores the use of selegiline for Parkinson's disease.

Additive Sedation
Brompheniramine, chlorpheniramine, clemastine, cyclizine, dexbrompheniramine, dimenhydrinate, doxylamine, meclizine, phenindamine, pheniramine, pyrilamine, and triprolidine must carry warnings advising the patient about possible drowsiness if they are taken concurrently with alcohol, sedatives, or tranquilizers.6 Diphenhydramine products also carry this warning but must state that they can cause "marked drowsiness." These ingredients are found in products indicated for allergic rhinitis, the common cold, motion sickness, insomnia, and menstrual discomfort.

Omeprazole and Diazepam
Nonprescription omeprazole carries a drug interaction warning against concomitant use with diazepam.6 Omeprazole can inhibit the metabolism of diazepam, elevating its blood concentrations.

Global Warnings Against Use with Prescription Products
Several nonprescription medications contain nonspecific warnings against use with any prescription product without a pharmacist or physician's advice, which of necessity would include all psychotropic medications. They include naproxen, ibuprofen, and codeine-containing schedule V cough syrups.6 As an example of the importance of these warnings, naproxen and ibuprofen both increase serum lithium levels when given concurrently with it.7

A global precaution also applies to medications that could alter the absorption of others, such as psyllium. One manufacturer warns against taking any other prescription medication two hours before or two hours after ingesting psyllium, as the medication may be trapped in the psyllium matrix and unavailable for absorption.6

Nonlabeled Psychotropic Interactions
The medical literature mentions numerous potential interactions between nonprescription products and psychotropic medications. Despite their inclusion in the literature, many are not included on the FDA-required label. Thus, the patient contemplating purchase of products without physician advice encounters no label warning and can rely only on the help of an informed pharmacist. For instance, cimetidine can interact with benzodiazepines, a fact not required on the cimetidine label.

Dietary supplements seldom, if ever, carry drug interaction warnings. Nevertheless, they can be the source of interactions with psychotropic medications. The following have been observed: St. John's wort and other SSRI antidepressants (serotonin syndrome); St. John's wort and lowered plasma concentration when used with amitriptyline, alprazolam, or midazolam; black cohosh and sedatives/hypnotics; capsicum and barbiturates or MAOIs; cat's claw and Halcion; chamomile and benzodiazepines or sedatives; coenzyme Q10 and phenothiazines or tricyclics; ephedra and MAOIs or tricyclics; eucalyptus and amphetamines or barbiturates; fish oil and antipsychotics; gingko and MAOIs; ginseng and MAOIs or stimulants; and kava and numerous psychotropics.7-10 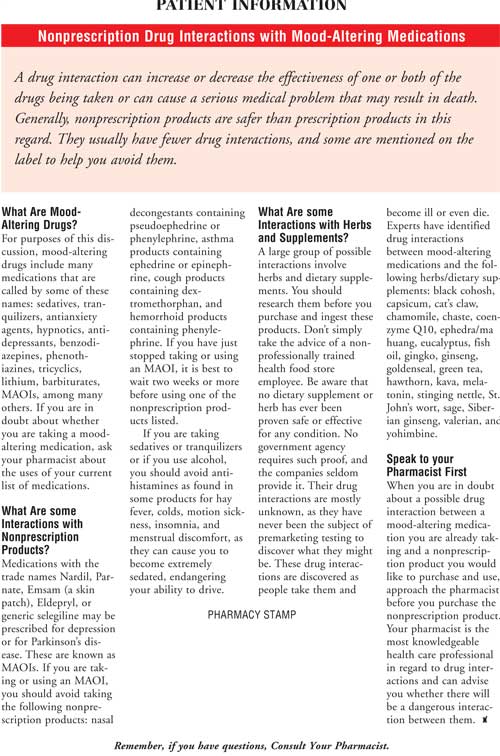