Chronic obstructive pulmonary disease (COPD) is characterized as a progressive airway disorder. Although the symptoms of COPD are treatable, the disorder lacks full reversibility.1 The classic symptom triad consists of cough, sputum production, and progressive dyspnea. Patients may initially present with one or more of the core pulmonary symptoms along with a history of exposure to risk factors for the development of COPD. In addition to the effects on the lungs, significant extrapulmonary effects can also occur.2 These systemic effects may include skeletal muscle dysfunction and cardiovascular effects, among others.2

COPD is currently ranked as the fourth leading cause of death in the United States, accounting for almost 120,000 deaths in 2004.3 Among the major causes of death, COPD is unique in that its incidence has been increasing over the past three decades.4 Furthermore, it is projected that mortality from COPD will only continue to rise.5,6

The economic burden of COPD is substantial, costing $26.7 billion in 2007 in the U.S. in direct costs alone.3 This considerable figure does not take into account indirect costs resulting from the consequences of disability, loss of work, and other factors.

The pathophysiology of COPD begins by an amplified inflammatory response in the lungs after inhalation of toxins (most commonly in the form of tobacco smoke).1,7 Although tobacco smoke is the most common stimulus, additional risk factors for the development of COPD include the inhalation of other environmental toxins, such as occupational dusts and chemicals, and host factors, such as alpha-1 antitrypsin deficiency. Neutrophils, macrophages, and lymphocytes are key participants in the inflammatory response in the lungs. Other potential causative factors include oxidative stress and an imbalance of proteases. Repetition of this abnormal response can result in structural changes in both the proximal and peripheral airways as well as destruction of the lung parenchyma. These structural changes lead to the progressive airflow dysfunction and symptoms characteristic of COPD.1,7

A straightforward spirometry classification of COPD disease severity is recommended by the Global Initiative for Chronic Obstructive Lung Disease (GOLD) (TABLE 1).1 Screening is not routinely advocated in asymptomatic patients, but spirometry is recommended to diagnose the presence of airflow obstruction in patients with cough, sputum production, and/or dyspnea.1,8,9 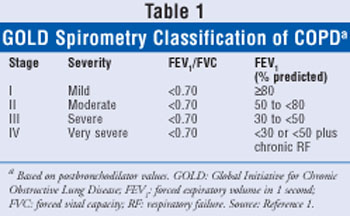 The management of mild to moderate COPD includes the avoidance and reduction of risk factors and the utilization of pharmacologic treatments to control COPD symptoms. Severe and very severe COPD often requires multiple treatments and the careful monitoring and guidance of a health care professional for patient support.1

The current GOLD goals of treating and managing COPD are to alleviate symptoms, slow or prevent the progression of disease, improve exercise tolerance and endurance, improve overall health, prevent and treat exacerbations and complications, and decrease mortality.1

As noted above, cigarette or tobacco smoke is the most commonly encountered risk factor; therefore, smoking prevention and cessation should be highly emphasized. It is also important for the patient to reduce personal exposures to occupational hazards, such as fumes and particles, and other indoor and outdoor air pollutants.1

Smoking cessation is the single most effective method to decrease exposure to COPD risk factors.1,10 It can prevent or delay the progression of COPD and can have a substantial impact on reducing mortality.10,11 Both individual and group counseling can be a very effective means of smoking cessation. Pharmacists and other health care providers can play an integral role in a multifaceted approach to smoking cessation. The 5A method (ask, advise, assess, assist, and arrange) is a framework that may be employed in order to encourage and support patients in their effort to quit smoking.12

Pharmacologic treatment of tobacco use and dependence is recommended when counseling alone is not effective. Factors such as medical contraindications, pregnancy, age, and frequency or number of packs smoked should be considered in choosing a treatment regimen.1 All forms of nicotine replacement therapy, including gums, inhalers, transdermal patches, sublingual tablets, and lozenges, have been shown to increase long-term abstinence rates and are significantly more effective than placebo.13 Treatment should be individualized, and proper counseling is essential.

Bupropion SR has been shown to be effective in increasing long-term abstinence rates as compared to placebo.13 Varenicline, a nicotinic acetylcholine receptor partial antagonist, is the newest drug therapy for smoking cessation. It has been shown to be effective in smoking abstinence and in reducing cravings and withdrawal symptoms.14-16 It is important to monitor patients taking varenicline for psychiatric symptoms, such as changes in behavior, agitation, and suicidal ideation.17 Patients should be asked about any history of psychiatric illness prior to beginning therapy with varenicline.

The treatment of COPD does not follow the step-down approach that may be utilized in the long-term treatment of asthma. Rather, treatment should be gradually increased, as COPD is generally considered a progressive disease. Factors to consider when assessing the severity of COPD include severity of symptoms, degree of airflow constriction, frequency and severity of exacerbations, presence of respiratory failure, and general overall health.1

Patient education is a crucial component in the management of any disease, including COPD. Education should be individualized and incorporated into a care management plan. When educating patients about COPD, it is important to include the following items: smoking cessation, pharmacologic therapy, self-management skills, and proper use of inhalation devices. Patients should also be educated about basic information concerning COPD, such as risk factors, signs and symptoms, and complications of the disease.1

None of the existing pharmacologic therapies for COPD have been shown to change the long-term deterioration in lung function. The purpose of pharmacologic treatment in COPD is to alleviate symptoms, reduce and control exacerbations, and improve overall quality of life.1 Treatment should be tailored to the individual patient and usually increases over time as the disease progresses. A listing of inhaled pharmacologic agents that are used in the management of stable COPD is found in TABLE 2. 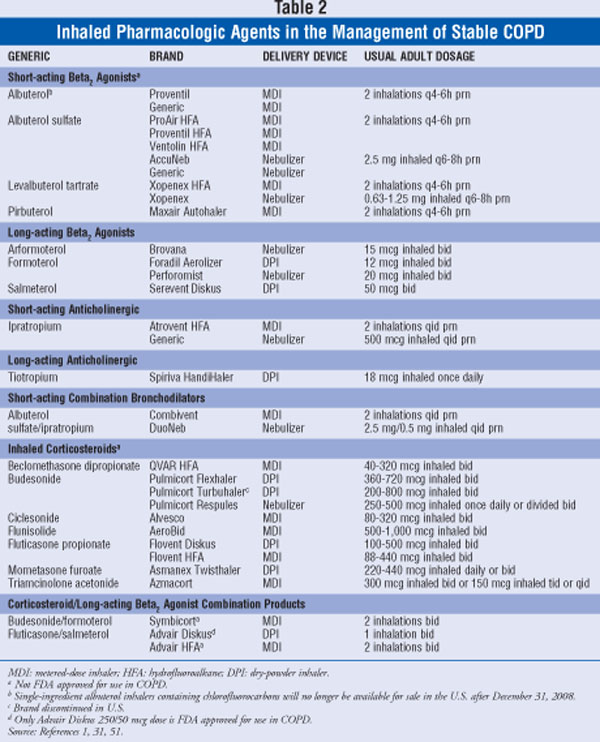 Bronchodilators improve airflow obstruction in COPD by producing airway smooth muscle relaxation. They expand the airway, leading to improved lung emptying, reduced hyperinflation, and improved exercise capacity. Inhaled therapy is the preferred route of administration of bronchodilators. These agents are key to the treatment of COPD symptom and can be given either on an as-needed basis or long-term.1

Short-acting bronchodilators are recommended for patients with COPD who have intermittent symptoms (stage I). They provide relief of symptoms and improve exercise tolerance. Short-acting bronchodilators (both beta2 agonists and anticholinergics) also improve pulmonary function, dyspnea, and exercise performance in patients who have moderate to severe COPD.18 Long-acting bronchodilators should be initiated in patients with significant airflow obstruction and chronic symptoms (stage II). These agents relieve symptoms, improve lung function, decrease the frequency of exacerbations, and improve health-related quality of life.19,20 Theophylline may be effective in COPD, but its potential toxicity limits its use in treatment.1 It is important to note that a lack of acute response with one bronchodilator does not necessarily predict response to another; therefore, trial with a different bronchodilator is warranted if the initial bronchodilator does not provide the desired effects.21

Methylxanthines: Theophylline is not considered first-line therapy in COPD due to the potential side effects, various drug interactions, and need for strict monitoring. It may be used as additive therapy to inhaled bronchodilators in select patients.31 Low-dose theophylline decreases the frequency of exacerbations in COPD patients but does not increase postbronchodilator lung function.1,32

Toxicity of methylxanthines is dose related. Adverse effects include insomnia, headaches, nausea, and heartburn. At higher serum concentrations, there is the potential for more serious side effects including arrhythmias, tachycardia, hypokalemia, and seizures.1 Additionally, theophylline is metabolized by CYP450 enzymes, which can lead to increased risk of various drug and disease interactions.

Combination Bronchodilator Treatment: Combining different types of bronchodilators may increase the degree of bronchodilation without increasing side effects. Combining a short-acting beta2 agonist and an anticholinergic may result in improved changes in forced expiratory volume in 1 second (FEV1) as compared to the individual drugs alone.1,33,34

Influenza vaccination can decrease serious illness and death in COPD patients by approximately 50%.42 All patients with COPD and without contraindications should receive a yearly influenza vaccine.1,43 The Centers for Disease Control and Prevention also recommends that a pneumococcal vaccination be administered to patients with COPD.43,44 All pharmacists can play an important role in vaccine advocacy by screening for patients that would benefit from vaccination and providing patient education.45

Pulmonary rehabilitation has been shown to be effective in COPD as an additional therapy to other treatments, such as bronchodilators. Benefits of rehabilitation include improved exercise capacity, reduction in the number of hospitalizations and days in hospital, and improved quality of life.9,37,46

In patients with stage IV COPD, oxygen therapy is one of the primary nonpharmacologic treatments. It can be administered in three ways: as long-term continuous therapy, during exercise, and to relieve acute dyspnea.1

Surgical treatment may also be an option for select patients with stage IV COPD. Such treatments include bullectomy, lung volume-reduction surgery, and lung transplantation. These treatments can provide benefits for some patients, including improved quality of life and functional capacity.1

Exacerbations can deleteriously affect the quality of life and prognosis patients with COPD. Managing COPD exacerbations typically requires increasing the dose and/or the frequency of existing short-acting bronchodilator treatment.1 Short-acting inhaled beta2 agonists are the preferred bronchodilators in treating exacerbations. The addition of an inhaled anticholinergic may provide additional benefit during exacerbations.1 Short-term (i.e., 7-10 days) systemic glucocorticosteroids have been shown to provide benefit in managing COPD exacerbations via improvement in recovery time, lung function, and hypoxemia.1,47

Antibiotics may be prescribed during COPD exacerbations if the patient requires mechanical ventilation due to the severity of the exacerbation. Antibiotics are also warranted for patients who are experiencing an increase in at least two of the cardinal symptoms (increased sputum purulence along with an increased sputum volume or dyspnea) or if other signs of bacterial infection are present.1 Although potential benefit has been shown when antibiotics are used during COPD exacerbations in the aforementioned situations, use of prophylactic antibiotics has not shown any effect on decreasing the frequency of exacerbations and is not recommended.1,48

Training in the use of inhalation devices is crucial. The use of metered-dose inhalers (MDIs) requires effective coordination and may be more difficult for some patients. Spacer devices are available and may assist patients in using MDIs. Dry-powder inhalers (DPIs) are activated by inspiration and may provide improved drug disposition; however, this has not been established among COPD patients.49 DPIs may still have the potential for poor technique and thus require careful instruction.49 Nebulizers may be an appropriate option for elderly patients or other patients who may experience increased difficulty in using existing inhalation devices. Choosing a particular device should be individualized, as studies have not shown clear efficacy benefit of one device over another.49,50 General patient counseling tips for the MDIs, DPIs, and nebulizers are reviewed in TABLE 3. For specific information on each of the individual devices, see the prescribing information.

Smoking cessation should be highly emphasized in patients with COPD and in those at risk for developing COPD. Patients with stage I COPD, who experience mild, intermittent symptoms, should be treated with short-acting bronchodilators for symptom alleviation. In patients with more chronic symptoms, long-acting bronchodilators should be initiated. A combination of a beta2 agonist with an anticholinergic may be considered when patients are not controlled with an individual agent. Inhaled glucocorticosteroids are recommended in addition to bronchodilators for stage III patients who experience frequent exacerbations. COPD is considered a progressive disease that requires monitoring, risk-factor reduction, and a step-up approach to therapy.