Prior to the 1994 Dietary Supplement Health and Education Act (DSHEA), the number of products promising to augment cardiac health was not great. However, that legislation allowed companies to make ill-supported and vague claims for products whose safety and efficacy were unproven. Consumers now face an onslaught of products that claim to "support and preserve" male urinary function, female menopause, liver activity, and a healthy heart. Yet, dietary supplements can actually present clear dangers to the heart. This column explores some of the most hyped supplements and their purported cardiac benefits or proven dangers.

Omega-3 Fatty Acids
Claims that fish oils can improve cardiovascular health first surfaced several decades ago. In 1993, the FDA reviewed the proof of benefit for omega-3 fatty acids, indicating that evidence was lacking for the risk reduction of coronary heart disease (CHD).1

However, the agency continued to examine evidence for two fatty acids: eicosapentaenoic acid (EPA) and docosahexaenoic acid (DHA). In 2000, the FDA stated that intervention trials suggested that omega-3 fatty acids reduced the risk of CHD. The FDA concluded that the use of EPA and DHA omega-3 fatty acids as dietary supplements was safe and lawful, providing that intake not exceed 3 g daily from both food and supplement sources. Thus, doses of 2 g daily of EPA and DHA would be advised. The agency decided that the following health claim would be appropriate: "The scientific evidence about whether omega-3 fatty acids may reduce the risk of coronary heart disease (CHD) is suggestive, but not conclusive. Studies in the general population have looked at diets containing fish and it is not known whether diets or omega-3 fatty acids in fish may have a possible effect on a reduced risk of CHD. It is not known what effect omega-3 fatty acids may or may not have on risk of CHD in the general population."1

The FDA issued a similar finding in 2004 for conventional foods containing EPA and DHA.2 Specific benefits provided by DHA and EPA may include reduced risk of arrhythmias, lower serum triglyceride levels, and inhibition of platelet function.3 The American Heart Association (AHA) now recommends that people eat fish twice weekly and also consume tofu and other soybean products, as well as canola, walnuts, and flaxseed and their oils.4,5 The AHA advises that patients consult a physician to see whether EPA/DHA supplements might be helpful if they cannot obtain sufficient omega-3 fatty acids by dietary means alone. Finally, the AHA recommends that those with elevated triglycerides take 2 to 4 g daily of EPA/DHA in capsule form, with monitoring by a physician. Thus, while evidence is not yet conclusive, the suggestive nature of research to date could allow the pharmacist to justifiably recommend adherence to the AHA guidelines with regard to dietary changes and possible ingestion of EPA/DHA supplements. 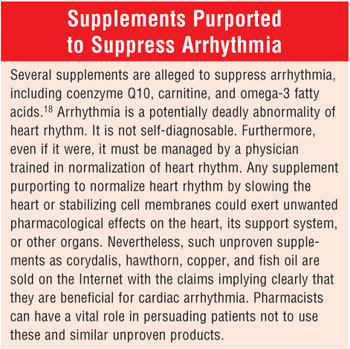 Homocysteine Reduction
Since 1969, homocysteine has been proposed as a causal agent for vascular disease.6 As a result, various groups have promoted the consumption of folic acid, pyridoxine, and cyanocobalamin to lower the risk of vascular disease. This mix of vitamins is claimed to lower homocysteine levels. In 1999, the FDA evaluated data for and against this claim.7 Evidence showed that folic acid and, to a lesser extent, cyanocobalamin and pyridoxine, did lower homocysteine. Yet, at that time, there were insufficient data to prove any link between elevated homocysteine levels and increased risk of vascular disease. The agency was therefore unwilling to allow any claims about B vitamins and cardiovascular risk in 1999.

Shortly thereafter, the FDA initiated a new review of over 35 more recent studies. Suggestive (not conclusive) evidence indicated that elevated homocysteine levels are associated with the risk of vascular disease, based on prospective, case-control, and cross-sectional research. This research did not answer whether some other unidentified variable affects both and thus could not conclusively confirm whether lowering homocysteine would reduce the risk of vascular disease.

Vitamin E
In 1999, the FDA was petitioned to authorize a health claim about the use of vitamin E in reducing the risk of heart disease. In 2001, the agency issued a letter detailing its findings.8 A review of interventional and observational studies failed to uncover a relationship between vitamin E and reduced risk of cardiovascular disease. The FDA concluded that a qualified claim could not be allowed. Thus, pharmacists should not recommend vitamin E to reduce the risk of any heart-related pathology.

Antioxidant Vitamins
Antioxidant vitamins, such as vitamin E, ascorbic acid, and beta-carotene, are allegedly beneficial in preventing cardiovascular disease.9 This claim began in the 1930s, when patients on a conventional diet were found to have higher blood pressure than were patients on diets rich in ascorbic acid and tocopherol.10 Subsequent research seemed to confirm the benefit of antioxidants in lowering the risk of myocardial infarction (MI) and stroke. Investigators conducted a thorough Medline search of reputable research on any link between antioxidants and  cardiovascular diseases.10 They reached the following conclusions:

(1) While patients with ischemic heart disease and stroke often have low intake and/or plasma levels of antioxidant vitamins, the disease and suboptimal vitamin levels may be reflective of unfavorable lifestyle choices.
(2) Those taking high amounts of antioxidants have been shown to have a low risk of MI and stroke, but both may be part of a cluster of healthy behaviors, rather than being linked in a cause-effect relationship.
(3) Food supplements high in antioxidants have not exerted beneficial effects on the risk of MI or stroke in randomized clinical trials.
(4) Observational studies suggest that diets low in fruits and vegetables may elevate the risk of cardiovascular disease, but other benefits of a diet high in fruits and vegetables are sufficient for its recommendation. This conclusion did not suggest that patients should ingest antioxidant supplements in preference to the healthful diet recommended by researchers.

Antioxidant supplementation is not yet proven to affect cardiovascular disease and may, in fact, be harmful. Beta-carotene can raise the risk of lung cancer in males who smoke.11

Ephedra/Ephedrine
Ephedra is critical to include in any discussion of the effects of supplements on the heart, due to the danger it represents. In 2003, the AHA urged the FDA to remove nonprescription ephedra-containing dietary supplements from the market, citing high blood pressure, stroke, heart attack, and death.12 In February 2004, the FDA issued a regulation prohibiting these dietary supplements, advising consumers to immediately stop using them.13 The rule became effective on April 6, 2004. The FDA was given authority to act against ephedra under the auspices of the DSHEA.

Nevertheless, supplement makers Nutraceutical Corporation and Solray, Inc., of Park City, Utah, initiated a lawsuit against the ban.14-16 As a result, U.S. District Court Judge Tena Campbell unfortunately lifted the ban in April 2005, enabling sales of the dangerous supplement once again. The basis for lifting the ban was that the FDA had not adequately demonstrated dangers with smaller doses of ephedra. Of course, the problem with this ruling is that patients who wish to take the supplement for diet or athletic misuse will not stop at taking one tablet of a lower dose but will take enough tablets to equal the larger dose they once took. Some health food stores in malls now have posted signs stating, "We have ephedra!" The unique dangers of this supplement are so compelling that pharmacists should not stock or sell ephedra, Ma huang, or ephedrine-containing products.

Conclusion
Pharmacists should be cautious about recommending supplements for cardiac and vascular health. Relying on these therapies might cause patients to neglect other critical and proven methods to prevent coronary artery disease, such as smoking cessation, blood pressure monitoring, lowering of lipid levels, and prevention and treatment of diabetes.17 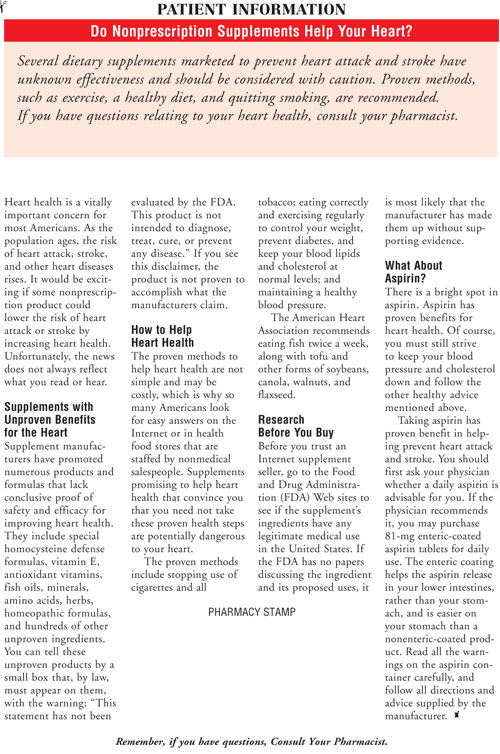