The pharmacist is on the front lines of pharmaceutical care when patients need assistance with minor health conditions. Quite often, parents and caregivers request assistance with infants. The pharmacist must have an acute understanding of which products are proven safe and effective for babies and which are not.

Age Limitations
When the FDA began its massive review of nonprescription products in 1972, one of the major tasks it had to accomplish was to determine the safe ages of use for each ingredient.1 The agency sought data and eventually established the minimal safe ages for which specific ingredients could be given and the appropriate dosages for each age. When medications switched from prescription to nonprescription status, the sponsor and the FDA cooperated to establish the minimum age that would be safe for self-use.

What Is Safe for Babies?
The end result of the FDA's deliberations is that many nonprescription products are prohibited in children under the age of 2 years, while others are labeled against use in patients under the ages of 3, 4, 5, 6, 12, 17, or 18 years.1 For example, the FDA recommends that OTC cough and cold medications not be used to treat infants and children under 2 years of age, and manufacturers have recently announced voluntary labeling changes for those under age 4.2 Products safe for use in babies include the following: teething products, colic products, ibuprofen concentrated infants' drops (except when used for sore throat), ipecac syrup, sunscreens (with age restrictions), and some nonmedicated topical products, such as those used for diaper rash. It must be noted that many nonprescription products have never undergone scientific scrutiny to prove their safety and efficacy, regardless of age-group.1 This includes most herbals, homeopathics, and dietary supplements. Because of lack of knowledge regarding safety and/or efficacy in babies, these products should be avoided.

Teething Products
The pharmacist can recommend topical products for teething if the child is 4 months or older.1 As the central incisors usually do not begin to erupt until 6 to 10 months of age, this is an appropriate age limitation. Ingredients proven safe and effective for teething include benzocaine and phenol. Of the two, benzocaine 5% to 20% is more readily available and may be a better choice. It is found in Baby Anbesol (7.5% benzocaine), Baby Orajel (7.5%), and Zilactin Baby Teething Swabs (10%). Parents or caregivers should be cautioned against use of unproven and potentially dangerous teething remedies such as homeopathic teething tablets containing belladonna, coffee, magnets, tea tree oil, anise seed, clove oil, and cantharides.

Some parents may ask for assistance when the baby is experiencing fever, nasal congestion, or diarrhea.3-5 When the pharmacist recommends a physician visit, the parent may assert that the potentially dangerous symptom is only due to teething. The pharmacist should stress that none of those symptoms are manifestations of teething, and the child's physician should be consulted for proper treatment.

Colic Products
Parents may ask for help with a baby whose violent and prolonged crying is assumed to be due to colic. The etiology of colic is not always clear, but some believe the underlying cause is trapped intestinal gas.1,6 This has led to widespread acceptance of such simethicone-containing products as Infants' Mylicon Drops and Little Tummys Gas Relief Drops. Simethicone is nontoxic and can be given to infants according to the doses on the label. Pharmacists should be cautious about stocking or recommending various "gripe water" products, such as Little Tummys Gripe Water, Baby's Bliss Gripe Water, Wellements Gripe Water, and Gentle Care Gripe Water.7 These unproven products contain sodium bicarbonate, ginger, fennel, and/or chamomile, none of which is known to be safe in babies or effective for colic. Pharmacists should neither stock nor recommend these products. 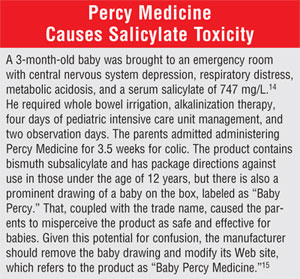 Ibuprofen Infants' Drops
Ibuprofen concentrated infants' drops (e.g., Motrin) are approved for babies down to 6 months of age who experience minor aches and pains due to the common cold, influenza, headaches, toothaches, teething, and immunizations.1 (The product is also indicated for sore throat but should not be used if the patient is under the age of 3 years.) Parents should ask a physician before using it if the child has not been drinking fluids, has lost a substantial amount of fluid due to continued vomiting or diarrhea, has stomach pain, or has experienced problems in the past when administered pain relievers or fever reducers. Parents should cease using the product and immediately consult the child's pediatrician or general practitioner if an allergic reaction occurs, as manifested by hives, facial swelling, asthma (wheezing), or shock. They should also seek medical help if pain or fever gets worse or lasts more than three days, if the child does not appear to obtain any relief within the first day (24 hours) of treatment, if stomach pain or upset worsens or persists, if redness or swelling is present in the painful area, or if any new symptoms appear. Before using the drops, the parent should check with the child's physician if the child is under a physician's care for any serious condition or is taking any other medications, including those containing ibuprofen, other pain relievers, or fever reducers.

Ipecac Syrup
For many years, ipecac syrup was considered to be a vital part of the medicine chest for every home with an infant. Given as quickly as possible after ingestion of a potentially toxic substance, it was allegedly useful in forcing the child to vomit. In recent years, however, its use has become the subject of substantial controversy. In 2003, a leading pediatric journal published research demonstrating that use of ipecac did not affect referral to emergency departments or the rate of adverse outcomes.8-10 Furthermore, ipecac does not completely remove toxins from the stomach, causes adverse effects, is mistakenly given when it should not have been, may cause persistent vomiting, and is subject to abuse by anorexics and bulimics. As a result of ipecac's many problems, the American Academy of Pediatrics Committee on Injury, Violence, and Poison Control recommended against keeping it in the home and also took the unusual step of recommending that any ipecac already present in a household be disposed of safely. An FDA panel voted six to four to make ipecac prescription only, but the FDA has not yet acted as of this writing, and the drug remains available. Stocking and recommending it in light of the current climate is not prudent. Rather, parents should be urged to call the National Poison Hotline (800-222-1222) immediately for proper advice when a poisoning incident occurs.

Sunscreens
It is now general knowledge that sunscreens are highly effective in preventing the consequences of sun exposure when used as directed. Many parents try to place sunscreen on infants when they are about to enter the sun. However, the FDA does not wish to allow labeling on any sunscreen product for babies younger than 6 months.1,11 There are several reasons for this. The first is that the FDA advises parents to keep babies less than 6 months of age out of the sun entirely. Therefore, having a sunscreen labeled for use under that age would give parents a false sense of security, perhaps conferring the mistaken idea that babies will be protected if the sunscreen is used. Babies cannot voluntarily move to shade when they are uncomfortable. They have underdeveloped sweat glands, which increases the risk of heat prostration. In addition, their ability to metabolize, detoxify, and eliminate the ingredients found in sunscreens is not fully developed. However, for babies above the age of 6 months, parents should choose a sunscreen with the highest sun protection factor (SPF) available (i.e., SPF 50+) to minimize the dangers of sun exposure.

Diaper Rash Products
Diaper rash products are a necessity for parents whose children are not yet toilet trained.12 If skin is allowed to remain in prolonged contact with urine and feces, the pH becomes favorable for reactivation of skin-destructive enzymes.1 The obvious method to avoid diaper rash is to change diapers as soon as they are wet or soiled. However, for a variety of reasons, this is not always practical. Therefore, parents often ask for advice concerning an ongoing case of diaper rash. If the skin is already broken, the baby should be referred to the pediatrician to assess the skin for the presence of a bacterial or candidal infection. If the skin is merely inflamed, however, the pharmacist can recommend a variety of diaper rash products.

The list of products with which to exercise caution also includes Johnson's Baby Oil.1,13 This product contains mineral oil, which the FDA discussed as a possible cause of chronic irritation and folliculitis. Johnson's Original Baby Powder and Medicated Baby Powder contain talc and cornstarch, respectively. Using powders around the baby is a practice that can cause inhalation pneumonia. Thus, powdered products should be used very cautiously, if at all. The parent or caregiver who insists on their use should be instructed to place a small amount into the hand while away from the baby's head, then pat it gently on the diaper area without raising a cloud of injurious dust. The safest and most effective diaper rash ingredient may well be simple petrolatum, typified by Vaseline Nursery Jelly. Using this product avoids the potential allergenicity of lanolin, the possible toxicity of boric acid/borates, and the dangers of inhalation posed by powders.

Pediatric Dosing Charts
A final issue is that of pediatric dosing charts. Pharmacists noticed the widespread voluntary recall of various cough and cold medications advertised and promoted for infants while lacking any proof of safety and efficacy in that group. The recall was issued just prior to an FDA meeting that confirmed the need to remove these products from the market. The manufacturers have also engaged in a practice that may cause pediatric dangers. Since the 1980s, many have published pediatric dosing charts purporting to provide pediatric doses of antidiarrheal medications, analgesics, and cough/cold products.1 These doses were not known to be safe and effective through legitimate research submitted to the FDA. If these charts are still to be found in pharmacies, they should be discarded and never consulted. 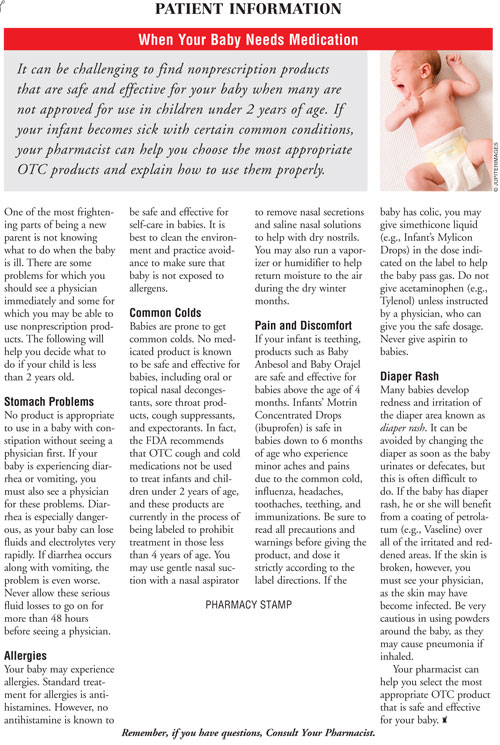