It is considered unethical for manufacturers to design prospective human trials to ascertain potential teratogenicity or to determine dangers to a baby when medications pass into breast milk.1 Thus, pregnant and lactating females are often referred to as therapeutic orphans. Many of these patients choose nonprescription products on their own.2 However, even when women do ask, pharmacists are hampered by the general lack of knowledge regarding the potential dangers of these products.
Pregnancy Versus Lactation
While pregnancy and lactation may seem similar with regard to medication toxicities, there are fundamental differences. During pregnancy, the fetus can come into contact with medications in higher amounts than through lactation.3 Despite this, the mother's liver and kidneys aid in detoxification and excretion. However, although less medication reaches the breast-feeding child, the infant must rely on its own detoxification and excretion abilities. Thus, each situation presents a unique set of problems.

Pregnancy
The risk for major malformations in babies is 3%, most of which are unrelated to medication ingestion.1 Nevertheless, pregnant females are usually careful to do everything possible to deliver a healthy infant. This should include abstaining from drugs of abuse and restricting use of medications that are not prescribed. The well-known thalidomide incident is still in the public awareness.3,4 Definitive evidence regarding other medications is usually lacking, as it is unethical to administer any product to pregnant females to determine teratogenicity. The identification of a possible teratogen usually rests on case reports, case-controlled studies, or cohort studies.3 Fortunately, few medications are teratogenic.

Aspirin and other NSAIDs are nonprescription products that are known teratogens, as they affect the fetal cardiovascular system. These products should be avoided during the last trimester. Furthermore, aspirin and other salicylates can cause alterations in maternal and fetal hemostasis mechanisms, decreased birth weight, and increased perinatal mortality.5 If aspirin is given one week before or during labor and delivery, it can result in excessive blood loss at delivery. Its action in inhibiting prostaglandin may also prolong labor and gestation.

The FDA has developed pregnancy risk categories.4,6 Category A (remote risk of harm in controlled studies in women) includes vitamins at RDA doses. Category B (no apparent harm to the fetus in animal and/or human research) includes acetaminophen, cimetidine, aluminum hydroxide, insulin, and ibuprofen in the first and second trimesters. Category C (no well-controlled studies in pregnant women) includes pseudo­ ephe­ drine, simethicone, clotrimazole, senna, dextromethorphan, aspirin, and hydrocortisone in the second and third trimesters. Category D (positive evidence of human fetal risk, but benefits may outweigh risk) includes ibuprofen in the third trimester and hydrocortisone in the first. Category X, including vitamin A at doses over the RDA, is contraindicated in pregnant women and in those who may become pregnant.

Breast-Feeding
The majority of prescription and nonprescription medications are not found in breast milk after ingestion.2 However, there are several recommendations that can be given to the concerned mother.2 First, she should be encouraged to avoid medications whenever possible and to explore the option of nonpharmacological therapies. Second, she should be advised to take oral medications immediately after nursing the infant and preferably before the babylongest sleep period. This will help prevent the baby from encountering medications by avoiding peak plasma and breast-milk levels. Third, the mother should take the regular-strength versions of a nonprescription product, rather than extra strength, maximum-strength, or long-acting versions. The mother should rely on single-entity medications instead of combinations, and she should be alert for the first sign of an adverse event in order to notify the pediatrician as early as possible.

Analgesics: Aspirin, magnesium salicylate, and bismuth subsalicylate can enter breast milk; they can cause adverse effects and lead to Reye's syndrome.2 Aspirin in breast milk can also cause rashes, platelet abnormalities, and bleeding.5 Combination analgesic products containing diphenhydramine, phenyltoloxamine, caffeine, salicylamide, and other ingredients should be avoided. Safer alternatives are ibuprofen and acetaminophen.

Antihistamines and Decongestants: Clemastine may produce drowsiness and irritability in the breast-fed infant. 2 Other antihistamines may also cause drowsiness. Experts advise ingesting the antihistamine after the last nighttime feeding, just prior to bedtime.2 Pseudoephedrine passes poorly into breast milk (0.5% of the oral dose), although it may decrease the volume of breast milk.2,7 Oxymetazoline can decrease milk supply.2 Phenylephrine has a shorter duration of action and might be preferable as a topical nasal decongestant, although mothers should carefully monitor the volume of breast milk to ensure that it does not undergo appreciable reduction in volume.2

Cough and Sore Throat Products: Guaifenesin, dextromethorphan, menthol, dyclonine, and benzocaine are reportedly safe for use by breast-feeding mothers.2 Although codeine does reach breast milk in detectable amounts, dextromethorphan is a safer antitussive.

Gastrointestinal Products: For upset stomach or reflux, antacids containing calcium or magnesium are fairly safe, as little passes in breast milk.2 However, sodium-containing antacids (e.g., Alka-Seltzer, Bromo-Seltzer) could cause fetal accumulation and should be avoided. Of the nonprescription H2-antagonists, cimetidine and ranitidine are found in higher concentrations in breast milk than famotidine and nizatidine, making the latter two appear preferable.2 Antidiarrheals containing loperamide are acceptable, but bismuth subsalicylate products should be avoided to prevent Reye's syndrome. For constipation, preferred agents are the bulk-forming products such as psyllium or methylcellulose. Magnesium hydroxide (e.g., Freelax) would also be acceptable, but docusate may cause diarrhea in the infant, and stimulants such as senna and bisacodyl are less optimal choices for all patients because of their nonphysiologic action. Simethicone is safe for flatulence because it is virtually unabsorbed by the mother. 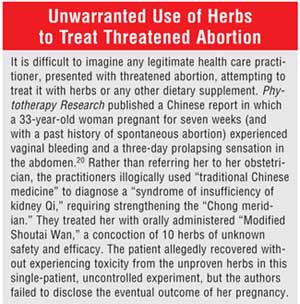 Herbal Medicines and Other Dietary Supplements
Approximately 13% of pregnant women take herbs or dietary supplements (other than vitamins or folic acid).8 Dietary supplements comprise unproven products such as herbals and nonbotanical supplements. (Homeopathic products are also unproven.) The FDA does not have the power to force manufacturers to prove these products are safe or effective for use, and their safety in pregnancy and breast-feeding is virtually unknown.9,10

As an example of possible hazards of dietary supplements, an infant suffered focal seizures 26 hours after birth and was found to have an infarct in the left-middle cerebral artery.11 The mother reported ingestion of blue cohosh tea as a means to induce labor. Manufacturers of blue cohosh (and all other herbs) do not carry out systematic studies of their use in pregnancy or lactation. Cerebral infarcts are exceedingly rare in newborns, but blue cohosh is known to cause uterine contractions and vasoconstriction, making it a possible cause. Furthermore, an older report pointed to blue cohosh tea as the causative factor in a neonate who experienced congestive heart failure, shock, and myocardial infarction.12 While some argue that such case studies should not be used to issue blanket indictments against all unproven products in pregnancy, others point out that the "poor quality control, uncertain efficacy and unknown dangers" of herbal medicines creates an unfavorable risk–benefit ratio with their use.13,14

A series of articles in The Canadian Journal of Clinical Pharmacology explored several herbs' safety and efficacy during pregnancy and lactation. One reported that 45% of midwives use black cohosh to induce labor, but that its use should be discouraged in all pregnant patients due to such concerns as labor induction prior to the appropriate time, hormonal effects, emmen­ ogogue (promoting menstrual flow) properties, and anovulatory effects.15 Its possible estrogenic/antiestrogenic effects would also cause it to be contraindicated in breast-feeding. Another article examined echinacea, concluding that it may be safe during pregnancy, but insufficient evidence exists to recommend its use while breast-feeding.16 St. John's wort is of unknown safety during pregnancy, and use while breast-feeding may cause colic, drowsiness, and lethargy.17 Ginkgo should be avoided during pregnancy because of its ability to prolong bleeding time; its safety during lactation is unknown and it should not be ingested.18 These reports exploring the safety of herbs in pregnancy and lactation are the exception rather than the rule for dietary supplements.

Taiwanese researchers conducted a prospective study in which over 14,000 live births were examined in relation to maternal ingestion of herbs.19 The herb huanglian was associated with major congenital malformations of the nervous system and An-Tai-Yin with major malformations of the musculoskeletal and connective tissues and the eye.

Each dietary supplement should be subjected to the same type of analysis to determine teratogenicity, but this is seldom done. Thus, pharmacists should advise against use of herbs and dietary supplements in pregnant and nursing patients. 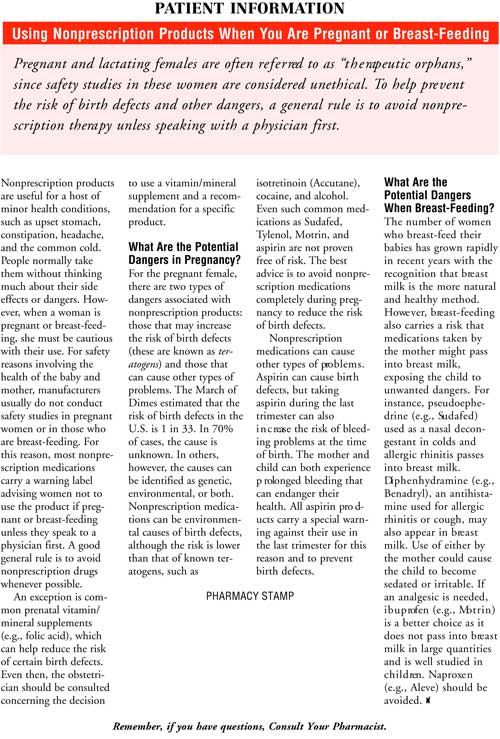 8. Fast facts about medication use during pregnancy and while breast feeding. Centers for Disease Control and Prevention. Available at: www.cdc.gov/ncbddd/meds/fast.htm. Accessed August 2, 2007.

10. Kuczkowski KM. Labor analgesia for the parturient with herbal medicines use: What does an obstetrician need to know? Arch Gynecol Obstet. 2006;274:233-239.