Normal pressure hydrocephalus (NPH) is a neurologic condition that is considered vastly underdiagnosed, as it typically induces symptoms similar to those seen in other forms of dementia. Some key symptoms associated with NPH also exist in other neurologic diseases, including Alzheimer's disease (AD), Parkinson's disease (PD), and vascular dementia. In fact, it has been estimated that 375,000 Americans who suffer from NPH have been misdiagnosed with dementia or PD.1 Additionally, some experts believe that between 1% and 10% of elderly persons living in the community and as many as 6% of nursing home residents have NPH; this is much higher than the number of persons actually diagnosed.2 Because NPH is treatable and considered a reversible form of dementia, early and appropriate diagnosis and treatment are essential for optimal clinical outcomes. Pharmacists working with the elderly both in nursing homes and the community should be aware of NPH, its signs and symptoms, and the impact of the disease on those who suffer from it.

NPH was first described in 1965 by Adams et al. as a condition that involved various neurologic symptoms, ventricular enlargement, and what appears to be "normal" cerebrospinal fluid (CSF) pressure upon lumbar puncture.2 The cardinal symptoms of NPH are known as the Adams triad: gait disturbance, dementia, and urinary difficulties.3 The classic theory is that the CSF pressure does not increase in NPH because the ventricles expand to accommodate the increased CSF volume; therefore, the pressure appears normal. Another theory is that the pressure temporarily increases when the ventricles are inflating but normalizes after they equilibrate. This is similar to inflating a balloon: Increased pressure is required to inflate the balloon, but at maximum size, the pressure is maintained at a reduced or seemingly normal pressure. By the time clinical symptoms develop, the ventricles will have already enlarged, and the pressure might have already normalized. Thus, checking the CSF pressure will not aid in confirming a diagnosis. The lack of elevated CSF pressure, as seen in other forms of hydrocephalus, lends to the difficulty in diagnosing NPH.

The resulting ventriculomegaly is thought to cause the triad of symptoms by compressing or stretching nerves in various areas of the brain, thus leading to improper neuronal signaling. Figure 1 illustrates both a brain with normal-sized ventricles and one with ventriculomegaly. 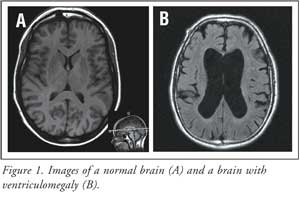 Pathophysiology
When the brain functions properly, CSF is produced by the choroid plexus at a rate of 20 to 25 mL per hour. The CSF then circulates from the lateral ventricles through the midline third ventricle and finally into the fourth ventricle found within the posterior fossa of the brain. From the fourth ventricle, CSF exits the ventricular system and enters the subarachnoid space surrounding the brain and spinal cord, where it acts as a cushion to help prevent brain injury. The CSF is normally reabsorbed by the arachnoid villi and passed into the venous sinuses at the same rate of CSF production to maintain consistent circulation and pressure.3 Figure 2 illustrates the normal flow of CSF in the brain. In patients with NPH, however, CSF is not adequately reabsorbed, causing excessive accumulation of fluid in the brain and leading to the triad of symptoms. 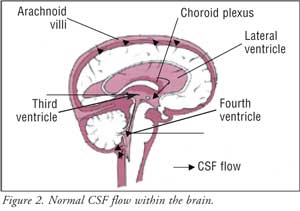 The excessive CSF within the brain can result from either idiopathic changes or trauma, with about 50% of patients in each category.2 Although the disrupted reabsorption of CSF by the arachnoid villi is not fully understood, some theories have implicated the accumulation of scar tissue. It is believed that scar tissue either decreases the ability of CSF to be absorbed properly through the arachnoid villi, or that scar tissue surrounding the venous sinuses in the brain impedes CSF from entering the bloodstream. Head or brain surgery, intracranial hemorrhage, and meningitis have been associated with NPH.3 Unfortunately, the progression of NPH is often slow, obscuring an exact etiopathology.

Clinical Presentation
NPH can occur at any age; however, it is typically more common among the elderly, most frequently in the sixth or seventh decade of life.4 Although symptoms of the Adams triad are strongly linked to advanced NPH, they may not all be present in early stages of the disease in these patients.5 One of the earliest symptoms is gait abnormalities, which are generally described as either shuffling (short strides), magnetic (difficulty raising legs), or broad based (legs far apart for stability).2 Regardless of which gait abnormality is present, patients with NPH tend to fall backward when walking without support.

Cognitive decline, unlike gait and urinary symptoms, tends to be gradual in patients with NPH. Symptoms typically include psychomotor slowing, verbal difficulties, and deficits in executive function.2 Hypersomnia can be present in up to 40% of NPH patients.2 Behavioral disturbances such as depression and agitation can also occur but are infrequent.

Urinary disturbances are exacerbated by the gait changes with NPH; however, urinary incontinence may result from a variety of other complications unrelated to dementing illness. People with NPH can have bladder control difficulties that range from increased urgency or increased frequency to incontinence. The bladder-related issues observed in NPH are similar to those seen in AD, PD, and vascular dementia but might not be directly related to these conditions. Thus, patients presenting with urinary symptoms should always be evaluated for infection, prostate disease (in men), or stress incontinence before a neurologic cause is suspected. 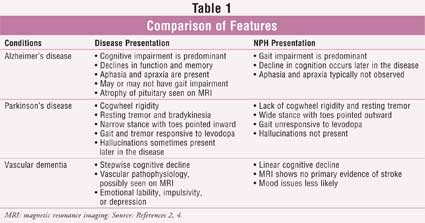 Both computed tomography (CT) scans and magnetic resonance imaging can be used to diagnose NPH; however, there are no reliable criteria for confirming a diagnosis with either method.2 Some elderly patients experience normal enlargement of the ventricles that is independent of NPH; thus, the ventricles might seem enlarged only because the brain has atrophied or shrunk. In such cases, the pressure and the flow pattern of the CSF will be normal.2 The radiologist can, however, rule out NPH by confirming an increased Evans ratio (i.e., the ratio of the frontal horns compared with the width of the skull as measured from the inner calvarial table). Non-NPH dementias with ventriculomegaly are usually associated with an increase in the Evans ratio. Radiologists should examine the hippocampus for atrophy or confirm an increase in CSF volume.

Cisternography, one of the main tests used to diagnose NPH, relies on CT monitoring of radionucleotides injected into the subarachnoid space via spinal tap. The ventricular reflux of radionucleotides is monitored with CT intermittently over a four-day period. 2,4 Owing to the poor reabsorption of CSF in NPH patients, it is thought that the radionucleotide dye will not be readily absorbed as it would in non-NPH patients.2 For those in whom a diagnosis of NPH remains possible, a lumbar puncture should also be performed. There are two options: a one-time lumbar puncture or a continuous lumbar drainage. Before the lumbar puncture is performed, a gait test is administered, during which the patient walks 50 feet while being videotaped. Then, at least 30 mL of CSF is removed, and the gait is reevaluated. After the lumbar puncture, an immediate improvement is usually seen in patients with true NPH; however, in some cases, a few days may be required before an improvement occurs.2 With continuous lumbar drainage, the CSF is allowed to drain for two to three days, during which the patient is periodically assessed for clinical improvement. This is believed to be a more reliable method of confirming a diagnosis of NPH. 2

Acetazolamide is a possible pharmacologic treatment option for NPH because it can help to reduce CSF secretion. Although some reports indicate it is an effective treatment for NPH, clinical results have not been encouraging.6 The most effective treatment for NPH is CSF shunting. Lumbar peritoneal, ventriculopleural, ventriculoatrial, and ventriculoperitoneal (VP) shunts are available; however, the VP shunt is the most commonly used.6 The VP shunt requires placing a catheter within the ventricles and attaching it to a valve just under the scalp. Another catheter, tunneled subcutaneously, leads from the valve to the peritoneal cavity, where the CSF drains and is readily absorbed (Figure 3).3 In addition to multiple types of shunts, there are two valve options: the fixed valve and the programmable valve. The traditional fixed valve has multiple settings, but after implantation, adjustment of the valve speed requires surgery and valve replacement. The newer programmable valve allows for modifications without invasive surgery to adjust the amount of CSF drained.6 This newer valve technique allows for adjustments based on clinical benefit. Shunt placement involves several risks, including shunt malfunction (20%), subdural hematoma (2% to 17%), seizures (3% to 11%), infection (3% to 6%), and intracerebral hematoma (3%).5,6 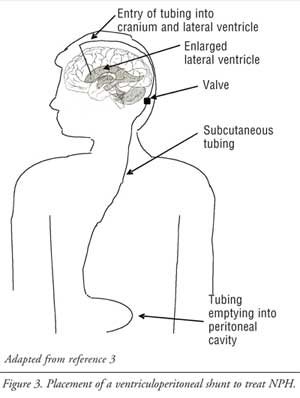 NPH is a neurologic syndrome associated with the Adams triad: abnormal gait, urinary difficulty, and symptoms of dementia. The symptoms of NPH are often similar to those seen in various forms of dementia, including AD, PD, or vascular dementia. Unlike other forms of dementia, NPH is reversible if treated early and appropriately. The timely implantation of a VP shunt to divert CSF from the brain has been shown to reverse the dementia and other symptoms associated with NPH, provided it is performed before damage from the enlarging ventricles has occurred. Because NPH is a reversible disease that is often mistaken for other nonreversible neurologic disorders, it is important that pharmacists and other members of the health care team become familiar with this condition and that they learn to distinguish it from other dementing illnesses.