The Omnibus Budget Reconciliation Act of 1990 (OBRA '90) included mandates for the states to improve understanding of medications by Medicaid beneficiaries for whom they were prescribed and dispensed.1 Although the Act was part of legislation passed in 1990, the pharmacy practice requirements did not go into effect until 1993. While the original statute was aimed at Medicaid recipients, each state had the option to adopt rules making those provisions applicable to other patients as well. Some jurisdictions limited the directives to only new prescriptions whereas others made the obligations applicable to both new and refilled prescriptions. A patchwork quilt of requirements has also evolved regarding whether the offer to counsel must be made personally by the pharmacist.

The various mandates of OBRA '90 are reviewed and the responses of the states after enactment are highlighted. The OBRA '90 mandates at the state level have played a part in a number of civil law suits across the nation. Is there a private right of action for patient injury attributable to a deviation from OBRA '90 mandates? How have courts sorted through this set of professional obligations for the pharmacist? Sufficient time has now passed to glean some lessons from these cases. Those lessons from the past and lessons anticipated in the future will be emphasized.

The shift in the focus of pharmacists' education and practice activities from products to patients gained momentum throughout the 1970s and 1980s, culminating in adoption of a variety of federal mandates pertaining to pharmacy practice in the 1990 budget bill enacted by Congress. The Omnibus Budget Reconciliation Act of 1990, known colloquially as OBRA '90, was enacted toward the end of the Congressional session to pull together in one piece of legislation all the appropriations-related authorizations and requirements flowing from the various Congressional enactments of the 101st Congress.

One of those components was a set of provisions added to the federal statutory scheme governing federal participation in the federal-state partnership program officially designated Grants to States for Medical Assistance Programs, known in everyday parlance as the Medicaid program. As Title XIX of the Social Security Act, this program has both federal and state financial components, providing the federal government with leverage to impose certain mandates on the states in order for them to get the federal matching funds, which now can exceed 75% of the program's cost to the state.2

The Statute at the Federal Level 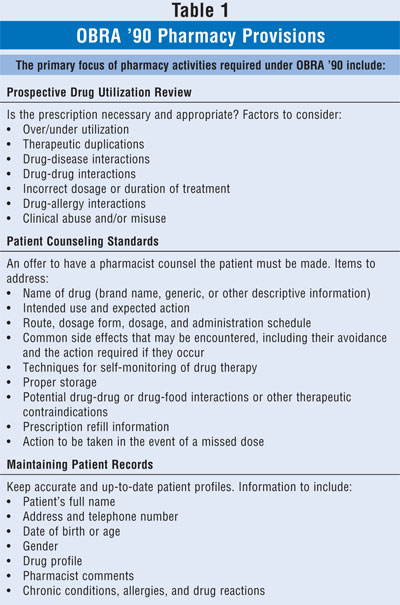 The States Respond with Statutes or Regulations
When these mandates reached the states, officials with the Medicaid program, along with leaders of the board of pharmacy or a similar administrative agency, began to formulate their responses. Several decisions needed to be made--the cascading federal mandate was for Medicaid beneficiaries only, but should this be extended to all patients? Should the offer-to-counsel requirement be limited to newly dispensed prescriptions or should it also include renewals? Must the offer to counsel be extended by a pharmacy staff member or would a sign suffice? Must the counseling be performed by the pharmacist face to face with the patient? Should maintenance of patient medication records be mandated? How the states are currently split on these questions, as reported by state boards of pharmacy to the National Association of Boards of Pharmacy, is shown in TABLE 2.4

The Courts Interpret OBRA '90 in a Variety of Contexts

We can learn a variety of lessons about how courts view pharmacy and pharmacists from case decisions where the statutes or regulations were interpreted. But there is an important caveat to bear in mind. The following cases only address issues considered by appellate courts in published opinions. Except for cases in federal district courts, there are no direct means to review decisions by state-level trial courts, as very few opinions are released or reported in the legal literature.
| 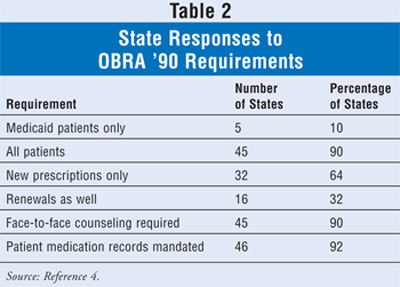 Cases Addressing the Standard of Care to Be Exercised by Pharmacists
In a case arising before the January 1, 1993, effective date of the offer-to-counsel mandate, the Court of Appeals of Georgia ruled that a pharmacist has no duty to warn a patient of, or to refuse to dispense a medication in light of, a potentially severe side effect arising from excessive dosage. Summary judgment entered for the defendant pharmacy was upheld on appeal, but the court noted that this "would not be controlling precedent for cases involving pharmacists' duties arising after January 1, 1993."5

In a separate case arising before the January 1, 1993, effective date of OBRA '90, the Florida Court of Appeals ruled that a pharmacist who accurately dispensed medication but failed to alert the patient or prescriber of potentially serious adverse drug interactions has no duty to warn.6

A pediatric patient was injured, and the question imposed on the pharmacist was whether the obligation to offer to counsel the parents as the caregivers and agents of the patient gives rise to a legal obligation related to the parents for their emotional well-being, as opposed to the actual patient's well-being. The Supreme Court of California ruled that no, this would be an "unwarranted enlargement of potential liability."7

The Missouri Court of Appeals reversed a summary judgment of the trial court granted in favor of the defendant pharmacist where the lower court had ruled that the pharmacist's "only obligation was to fill [sic] the prescriptions accurately." The case involved a "strong hypnotic drug prescribed at three times the normal dose." The court said, "Pharmacists are trained to recognize proper dose and contraindications of prescriptions, and physicians and patients should welcome their insights to help make the dangers of drug therapy safer." Summary judgment was overruled and the case returned to the trial court for a decision on whether the pharmacist met his legal duty under the facts of the case. 8

In an officially unpublished opinion (that was nevertheless reported in a jurisprudence database), a patient who declined counseling and signed a waiver form was not permitted to later allege that he should have been counseled anyway. This was a very interesting case where the patient made all sorts of convoluted arguments as to why he should be allowed to maintain this claim, but in the end he not only lost but had to pay the costs of the pharmacy chain's appeal.10

Cases Addressing the Issue of "Mandatory" Copayments Reducing Reimbursement to Pharmacies
At issue in this case was the provision in OBRA '90 that "reimbursement limits" may not be modified by the federal government and that state governments may not "reduce the limits for covered outpatient drugs" if the state's Medicaid plan was in compliance with applicable federal regulations when certain emergency regulations were adopted. The focus here was whether Pennsylvania's plan was deemed to be "in compliance," meaning that no reduction in reimbursement was permitted. The court ruled that yes, the state was in compliance, and therefore was prohibited from reducing payments for covered outpatient medications.11

The four-year moratorium on reduction in medication reimbursement limits was also at issue in this case in a U.S. district court in Florida. After the effective date of OBRA '90, the Florida legislature passed an appropriations bill that implemented a copayment feature for the state's Medicaid drug program. Reimbursement rates to pharmacies were not altered, but the state agency charged with administering the program automatically reduced payments to providers by the amount of the copayment. Further, federal program requirements prohibit a participating provider from denying services to a program participant who cannot pay the cost-sharing amount. The Florida Pharmacy Association advanced the argument that this amounted to a reduction in reimbursement, a violation of the OBRA '90 moratorium. The court did not agree. In its view the pharmacies now have two sources of reimbursement--state plus patient--rather than one as before, stating that "whether one of the sources, the recipients, may not be so forthcoming with reimbursement does not change the fact that the reimbursement limits have not been changed."12

The copayment implemented for Medicaid-covered medications in Nebraska presented issues parallel to those in the Florida case discussed above. Noting that authorization for states to implement copayments in the Title XIX drug program had been in place since 1982, the court ruled that the defendant state officials "have ordered that in certain cases a pharmacist may never actually recover the reimbursement limits notwithstanding the fact that the pharmacist would theoretically be eligible for maximum reimbursement. The plain words of the federal statute prohibit this practice." Waxing poetic, the judge in the case continued, "This case brings to mind Gertrude Stein's familiar words: 'A rose is a rose is a rose'...A reduction is a reduction, whether by change in a formula or otherwise."13

Indiana's plan had a 50 cent copayment for generic medications and a dollar copayment for brand name products at that time. And the court there quickly grasped the issue. "While the Moratorium clearly prohibits a decrease in ëreimbursement level,' it does not explicitly state how the copayment provisions, which predates the Moratorium, is to be affected." In the end, the request of the Indiana Pharmacists' Association for an injunction prohibiting such action by the state government was granted.14

The federal district court in Indiana noted that "the State is able to reduce its reimbursement liability to pharmacists not only by the amount of copayments that are collected by pharmacists, but also by the amount of copayments the pharmacists are unable to collect because of the patient's inability to pay." It was estimated that 50% of Medicaid recipients could not afford the copayment. The state agency argued that the federal statute prohibits reducing "payment limits," which it was not doing; it was reducing the actual amount paid. The court rejected that interpretation, concluding that "in enacting the moratorium, Congress intended to protect the actual level of reimbursement flowing to pharmacists." 15

Case Addressing Issues with Mandatory Rebates from Manufacturers
The Pharmaceutical Research and Manufacturers of America (PhRMA) challenged the provision in Michigan's OBRA '90 authorized program whereby states established preferred drug lists for Medicaid and required prior authorization for coverage of nonpreferred medications that had generated insufficient rebates for the state. The state's program was upheld.16

Conclusions
The five cases that address pharmacy reimbursement are likely last words on that issue based on OBRA '90 provisions, given that the moratorium on states altering the methods of calculating fees and benefits has since expired. This is not to say that there are not still, and probably always will be, reimbursement disputes. Likewise, rebate issues will linger as well. It has been noted that "as more courts are asked to address the legal standard of pharmacy practice, they will turn to OBRA '90 to assist them in defining those standards. OBRA '90 mandates that pharmacists take on additional responsibilities, and with those expanded responsibilities come expanded expectations and liability."17 Given that there are only six published opinions that address the standard of care exercised by pharmacists over the past few years using OBRA '90 language, it is fair to conclude that this statute has not caused the revolution in pharmacist counseling that some commentators or observers predicted at the time of its enactment and implementation. It is commonly observed that the wheels of justice turn slowly. Given this, there is still hope that OBRA '90 still be considered a planted seed that yields a change in the communications relationships between pharmacists and patients.