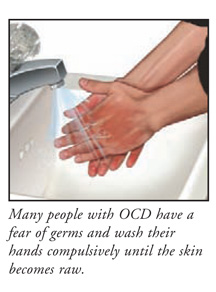 Obsessive-compulsive disorder (OCD) is a type of anxiety disorder that is named for its symptoms. People with OCD suffer with obsessions, or persistent thoughts that are senseless and uncontrollable, and/or compulsions, repeated actions that help relieve the anxiety that comes from obsessive thoughts. OCD was once thought to be an uncommon problem, but it is now estimated to affect more than 2 million Americans. Although researchers do not fully understand the cause of OCD, it is most likely a result of a low level of a brain chemical called serotonin.

People with OCD live a life ruled by their obsessions and compulsions, which can seriously interfere with school or work. Most people with OCD feel ashamed of their obsessive thoughts and compulsive behaviors. Since they are not able to control them, they cope by hiding them from friends and family to avoid embarrassment. Symptoms may worsen or improve over a period of time, but in many cases, they eventually interfere with a person’s ability to function and enjoy life.

Treatment of OCD includes cognitive behavior therapy and medications. The cognitive behavior therapy specific for OCD is called exposure and response prevention. This psychotherapy retrains the way the mind reacts to obsessive thoughts so the person with OCD no longer needs to perform the routines (compulsions) used to calm those thoughts. In this therapy, the patient confronts the obsessive idea or object, allows the anxiety to develop, and then avoids the compulsive behavior that is normally used to rid them of the anxiety. Eventually, repeating this exposure to the feared idea or object and not responding with the repetitive behavior will retrain the brain to avoid the OCD cycle. Some OCD patients may also need medications to help them control their OCD. Several drugs are used to treat OCD by increasing the action of serotonin in the brain, a chemical that may be deficient in patients with OCD. Once the symptoms are controlled, the dosage can be decreased and even discontinued in some patients.

People with OCD are bothered by obsessive thoughts, such as a fear of germs or dirt, a deadly disease, an intruder entering the house at night, or harming someone. In order to control the anxiety that these thoughts cause, the person with OCD feels compelled to take certain actions, which are repeated in a ritual-like manner. These compulsions include repeated handwashing, visits to the doctor to rule out serious disease, checking door and window locks over and over, and routines to prevent harming others, such as counting or touching things in a certain order. Although most people with OCD understand that these rituals are senseless, they feel driven to repeat them in order to rid themselves of their anxious thoughts.

Signs and Risk Factors of OCD

OCD often appears in childhood or teenage years, affecting men and women equally. In many cases, the early symptoms of OCD may not be troublesome or life-altering but may seem to be part of a “compulsive” or “overachiever” personality. OCD can occur simultaneously with other anxiety disorders, eating disorders, or depression. In some cases, OCD runs in families, and the risk of OCD is higher in people with a family history of other psychiatric disorders. Being raised in an extremely rigid, controlled environment was once thought to be a predictor of OCD; this is likely not true, but major life stressors may trigger the symptoms. Pregnant women and new mothers may develop symptoms of OCD, with obsessive thoughts centered on harming their child.

A person with OCD will likely seek help when symptoms interfere significantly with his or her daily life. The diagnosis of OCD is made after taking a thorough history of symptoms from the patient, often with the help of family members or close friends. OCD may evoke symptoms similar to those of overwhelming anxiety, so it is important that a person with OCD consult a qualified professional. In order to be diagnosed with OCD, a person must suffer from obsessions and/or compulsions and realize that they are not reasonable. These symptoms must interfere with everyday activities. Obsessions are persistent thoughts that cause distress, not just worries about actual problems. Compulsions are repeated behaviors or mental acts that are performed following rigid rules. These compulsions are used to reduce the anxiety caused by the obsessive thoughts, but they may not be realistically connected with the obsession.

Exposure and response prevention is a specific type of psychotherapy used to help patients manage their OCD symptoms. Patients expose themselves to their obsessions gradually without allowing their ritual or compulsion to follow right away. Patients will start to feel less and less anxious from the obsessive thoughts and can resist their compulsive behavior long after therapy has ended.

Along with psychotherapy, many OCD patients will benefit from the use of a drug that increases serotonin levels in the brain. A group of antidepressants that act in this manner have been approved for the treatment of OCD, including clomipramine (Anafranil), fluoxetine (Prozac), fluvoxamine (Luvox), paroxetine (Paxil), and sertraline (Zoloft). After several weeks of daily medication, a majority of patients will notice a significant relief of their symptoms. The main side effects of these antidepressants are drowsiness, headache, and nausea. They can interact with many other medications, so it is important for your pharmacist and doctor to be aware of all medicines taken with these antidepressants.