Atrophic vaginitis is a common disorder that causes dryness of the vaginal tissues and other troubling symptoms. As the average age of the population rises, knowledge of self-care interventions for age-linked conditions such as atrophic vaginitis is becoming increasingly important. Thus, pharmacists must know which products can be recommended for this condition.

Prevalence
Investigators surveyed a cohort of postmenopausal females ages 50 to 79 to determine the prevalence of self-reported urogenital symptoms, including those indicative of atrophic vaginitis.1 The most common symptom was vaginal dryness, affecting 27% of respondents. Irritation or itching was reported by about 19% and discharge by approximately 11%. Symptoms were more common in Hispanic females, obese women, and those with diabetes mellitus. In other research, 43% of women age 61 experienced vaginal dryness; 10% experienced vaginal burning.2 Examining the incidence of vaginal dryness alone illustrates the strong age link: Only 3% of women of reproductive age are troubled by it.3 However, the incidence increases to 4% of women in their early menopausal transition, 21% of those in their late menopausal transition, and 47% of women three years postmenopause.3

Epidemiology
The major causal factor in atrophic vaginitis is insufficient estrogen. Inadequate levels of estrogen can be the result of several medical conditions. The most common is menopause.4 The average age at which women experience menopause is 51 years.5 Generally, symptoms of atrophic vaginitis are noticeable five to 10 years after menopause begins. Premenopausal patients may also experience atrophic vaginitis when they undergo surgical removal of the ovaries.6 Women with such conditions as endometriosis or uterine fibroids may take medications that decrease estrogen; as a result, they can experience subsequent atrophic vaginitis.6

Breast-feeding can cause atrophic vaginitis.6 In addition, cigarette smoking can affect vaginal tissues adversely, reducing blood perfusion and the bioavailability of estrogen.6 (Smoking also lowers the age at which menopause begins.5)

Sjögren's syndrome affects four million Americans, with a female-to-male ratio of 9:1.7 One component of the syndrome in women is vaginal dryness, accompanied by dryness in the eyes, mouth, skin, nose, and lungs.

Manifestations of the Condition
Several vaginal changes characterize atrophic vaginitis.6 One such change involves intra­ vaginal tissues. Normal intravaginal epithelium is rugated, consisting of tissues with folds, ridging, and wrinkling. Estrogen is responsible for maintaining the appropriate vaginal rugosity. However, with insufficient estrogen, the rugae decrease in prominence, causing vaginal tissues to develop a smooth, shiny, thin, and pale appearance. These changes are accompanied by numerous petechial hemorrhages, erythema, inflammation, bleeding, friability of tissues, and discharge.6

Changes in collagen and elastic fibers of vaginal tissues have profound consequences.6 Collagen fibers swell and fuse, while elastic fibers fragment. As a result, the vagina develops an abnormally restricted architecture, becoming more short and narrow than it was when the patient was younger. The vagina also loses elasticity and has a decreased ability to distend during sexual activity. Vaginal lubrication decreases, causing pruritus and leukorrhea.6 The net result of many vaginal changes that characterize atrophic vaginitis is decreased sexual pleasure. Urinary symptoms also occur, including dysuria, urgency, and incontinence.2

Benefits of Sexual Activity
Vaginal dryness and other changes cause dyspareunia for a significant number of women.5 This condition may lead to avoidance of sexual activity. However, avoidance contributes to the problem, because intercourse enhances vaginal blood flow and helps preserve tissues in their more youthful state.6 Furthermore, vaginal health is improved when tissues are bathed by the steroids, prostaglandins, and essential fatty acids present in male ejaculate. 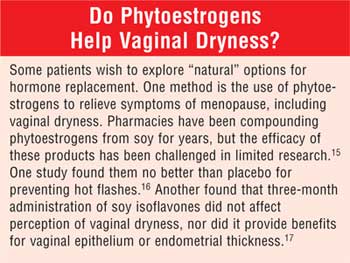 Prescription Products
A discussion of prescription options for vaginal and urinary symptoms of menopause is beyond the scope of this review. However, physicians might consider the use of estrogens (either orally or in the form of transdermal patches or gels), intravaginal rings (Estring), vaginal tablets (Vagifem), or vaginal creams (Estrace).8

Nonprescription Vaginal Lubricants
Patients may choose from numerous vaginal lubricants. All lubricants provide relief of vaginal dryness, but they differ in several important parameters, such as the number and variety of line extensions marketed under each trade name, dosage forms, and auxiliary benefits claimed by their manufacturers.9

The K-Y brand and its line extensions are the most familiar set of products for vaginal lubrication.10 All are compatible with condoms. The most well known is K-Y Jelly, consisting of purified water, glycerin, hydroxyethylcellulose, chlorhexidine gluconate, gluconolactone, methylparaben, and sodium hydroxide. (The manufacturer does not list concentrations on the labels of its products.) The jelly may be used as needed to provide comfort with sexual activity. Its consistency allows easy postcoital removal. It is unique among the K-Y product line-up in that the manufacturer recommends its use for easing rectal insertion of thermometers or enema nozzles and vaginal insertion of tampons.

K-Y Ultragel is advertised as a smooth product that is "less messy," being somewhat thinner than the jelly. The company also claims that it is superior to K-Y Jelly, due to its smoother consistency and enhanced duration. Its ingredients are purified water, propylene glycol, sorbitol, polysorbate 80, Natrosol 250H, benzoic acid, methylparaben, and vitamin E.

K-Y Liquid is a fully liquid product, with purified water, glycerin, sorbitol, propylene glycol, Natrosol 250H, benzoic acid, methylparaben, and sodium hydroxide. The company claims that this product is also smoother and longer lasting than the original jelly. With K-Y Warming Liquid, the manufacturer claims that application produces gentle warming. On a company-sponsored list of frequently asked questions, the manufacturer states that warming is produced through the use of a "unique patented mixture that is proprietary to the brand" and also assures readers that it has been tested and found safe for use.10 The labeled ingredients are propylene glycol, glycerin, purified honey, and methylparaben.

According to the product packaging, K-Y Silk-e Liquid resembles the patient's natural moisture. The list of ingredients is similar to that of K-Y Ultragel but adds aloe vera and substitutes polysorbate 60 for 80. The manufacturer of K-Y Long Lasting promises the product will last for days, with an ingredient list that includes purified water, glycerin, mineral oil, calcium/sodium PVM/MA copolymer, PVM/MA decadiene crosspolymer, hydrogenated palm glyceride, methylparaben, benzoic acid, vitamin E, and sodium hydroxide. It is important to note the presence of mineral oil. Even though mineral oil degrades rubber products such as condoms, the company Web site is insistent that all K-Y products are safe to use with condoms. The manufacturer also markets a line of K-Y Sensual Mist products, a unique dosage form among personal lubricants. The warming version of the mist contains propylene glycol, PEG-400, and tocopherol.

Several other companies market vaginal lubricants. The Astroglide brand includes a gel, liquid, warming liquid, and Astroglide Silken Secret--a jelly marketed in prefilled applicators. All are compatible with condom use.

Lubrin is a vaginal insert that the manufacturer suggests inserting at least five minutes prior to intercourse. It is designed to liquefy rapidly and provides several hours of lubrication. If the patient discovers that one insert produces excessive lubrication, half of an insert may be adequately effective. If the inserts are exposed to extreme heat, they may melt. The patient should place the inserts in a refrigerator for 24 hours, allowing them to resolidify without altering their efficacy. A small chart on the insert enclosed in the Lubrin packaging confirms that the inserts are compatible with condoms.

The manufacturer of Replens attempts to differentiate its product from these by stressing that it is a moisturizer rather than a lubricant.11,12 The Web site indicates that other lubricants are useful mainly for coital purposes, while Replens purportedly promotes "natural function of the vaginal lining."11 It is compatible with condoms. A study compared the purported bioadhesive properties of polycarbophil (as used in Replens) versus pectin (as used in other moisturizers).13 The researchers failed to discover any unique advantage to the Replens formula in increasing vaginal lubrication.

A topical cream known as Finally has been heavily promoted for enhancing sensitivity and pleasure for females during sexual activity. How it might accomplish that is unknown, but the company promises compatibility with condoms, implying that it might be used as a lubricant. The ingredients include plants of unknown safety and efficacy when applied vaginally, such as aloe, ginseng, palmaria/palmata, Cananga odorata, and lavender. One report implicates lavender in contact allergy that complicated a case of chronic vulvovaginitis.14 Products promoted to the lay public without FDA-approved evidence of safety and efficacy should be scrutinized thoroughly before they are offered for sale in pharmacies. 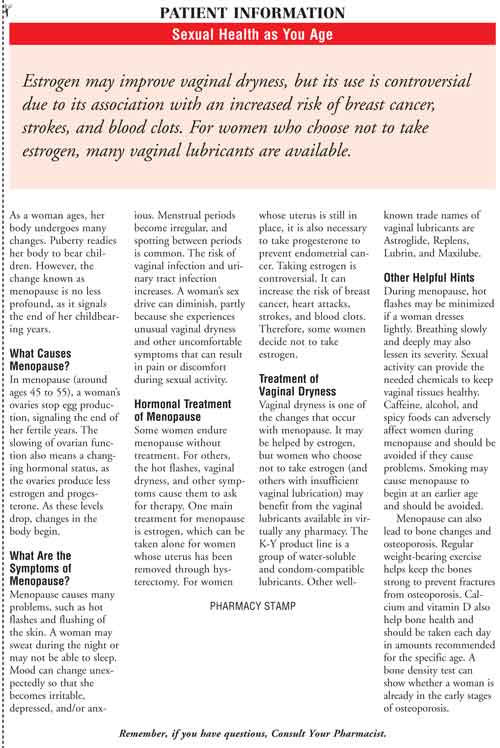