The periodontium, defined as the tissues that surround and support the teeth, includes the gingivae (gums), bone, cementum (root surface), and periodontal ligament (fibers that hold the tooth in the socket). Many oral health changes to the periodontium occur during the lifetime of a female, starting at puberty and progressing through menstruation, pregnancy, and menopause. These changes are due to alterations in the level of sex hormones, such as progesterone and estrogen.

Sex Hormones and Periodontal Changes
Estrogen, which is secreted by the ovaries, is important for the development and maintenance of secondary sex characteristics and for uterine growth. Progesterone, which is secreted by the corpus luteum and the placenta, is responsible for building the uterine lining in the second half of the menstrual cycle and during pregnancy. Both hormones have an effect on periodontal tissues and periodontal disease progression (e.g., gingivitis and periodontitis).1,2

Receptors for estrogen and progesterone are pres­ ent in the gingiva.2,3 Elevated levels of progesterone are responsible for increased vascular dilation of the gingival tissues, the production of prostaglandins, and the movement of polymorphonuclear leukocytes, all of which result in gingival inflammation. Estradiol increases the amount of gingival inflammation with no increase of bacterial plaque.2 Many periodontal bacteria residing in the subgingival environment, such as black-pigmented Bacteroides, Prevotella intermedia, and the Capnocytophaga species, utilize estradiol (principal estrogen) and progesterone as growth factors or nutrients. Additionally, in a study by Contreras et al., a higher proportion of preeclamptic women were infected in the gingival pockets with periodontal pathogens such as Porphyromonas gingivalis, Tannerella forsythensis , and Eikenella corrodens, compared with nonpreeclamptic or normal pregnant women.4

Hormonal fluctuations during a female's lifetime may cause an exaggerated inflammatory response to dental plaque, resulting in gingivitis. Features of hormone-associated gingivitis include accumulation of dental plaque on the teeth, pronounced inflammation of the gingivae, redness of the gingivae, and bleeding gingivae. These changes vary depending on the individual and are most likely related to the individual's immune response to various irritants (e.g., dental plaque) in the mouth. Thus, a female with elevated hormone levels and minimal bacterial plaque in the mouth may have an exaggerated response to the plaque irritant and thereby develop gingivitis. Hormone associated-gingivitis is reversible following puberty or pregnancy, and no radiographic bone loss is observed.

Approximately 23% of women between the ages of 30 and 54 have periodontitis, which is characterized by pocket formation and bone loss around the teeth. About 44% of women between the ages of 55 and 90 with periodontitis still have their teeth.5 As a woman's health changes throughout her lifetime, oral health can change as well. Pubertal girls, women of childbearing age, and pregnant women have elevated levels of progesterone, primarily, but also of estrogen. These elevated hormone levels have certain oral health implications. In addition, menopausal and postmenopausal women have decreased sex hormone levels, which also have certain oral health implications.

Puberty
During puberty, increased levels of progesterone and, possibly, estrogen may have effects on the gingivae. Puberty-associated gingivitis is characterized by swollen, red, bleeding gingivae.6 These soft tissue changes are transitory and revert to normal levels in the post-circumpubertal period. Most females with healthy gingivae likely will not develop significant periodontal changes.

A higher population of bacteria in subgingival pockets is present during puberty, which may selectively accumulate estradiol and progesterone.2 Meticulous oral home care consisting of regular brushing and flossing and routine dental visits may help prevent the development of gingivitis.

Menstruation
During the luteal phase of the menstrual cycle, which begins at about day 14 of the cycle and then declines, progesterone levels peak. Elevated levels of progesterone may cause significant oral inflammatory changes, such as bleeding and red, swollen gingivae. Thus, gingival changes may occur just before the beginning of the period and disappear once it begins.7 Most females with healthy gingivae likely will not develop significant periodontal changes. Changes in estradiol levels during the menstrual cycle may also be accompanied by similar fluctuations in bacterial flora.

Pregnancy
Pregnancy-associated gingivitis can occur in approximately 57% of pregnant women.8 During pregnancy, there is a marked elevation in sex hormones, which may affect the gingival tissues in certain individuals. An exaggerated gingival inflammatory response to dental plaque is the primary cause of the gingivitis, which usually starts around the second month of pregnancy and generally resolves following parturition (Figure 1). Additionally, pregnancy may accelerate the development of periodontitis (deep pockets and bone loss around teeth).9 There may also be a link between periodontitis and adverse pregnancy outcomes, including preterm delivery and low-birth-weight babies.10

Periodontal treatment of the pregnant patient has been controversial. Findings from one clinical study reported that periodontal treatment during the second and third trimesters of pregnancy is safe, but the risk of adverse effects, such as preterm delivery (birth occurring before 37 weeks of pregnancy), low birth weight, fetal growth restriction, or preeclampsia, is not reduced.11,12 On the other hand, data from four clinical trials found that periodontal treatment in pregnant women may lower the incidence of preterm delivery and low-birth-weight babies.13 Maternal and fetal exposures to gram-negative periodontal bacteria may trigger inflammatory events in both the mother and the fetus, which may stimulate early rupture of membranes and parturition.13

Menopause
Menopause by itself is not a risk factor for periodontal diseases. A correlation between osteoporosis and periodontal disease and tooth loss in postmenopausal women has been documented but is not considered a definitive risk factor.15 Skeletal bone mineral density is related to loss of bone around the teeth. 16 Since the teeth are embedded in bone that comprises the maxilla and mandible, osteoporotic changes may affect these structures.

The use of intravenous and oral bisphosphonates has been linked to an increased incidence of osteonecrosis of the jaws in patients undergoing dental procedures such as tooth extractions, periodontal surgery or cleanings, and root canals.17-19 Bisphosphonate-associated osteonecrosis of the jaws is characterized by pain or swelling in the affected jaw, an irregular mucosal ulceration with exposed bone in the mandible or maxilla, and infection. It is important for the pharmacist and dentist to be aware that the patient will be or currently is taking a bisphosphonate. Commonly prescribed bisphosphonates include zolendronic acid (Zometa), pamidronate (Aredia), alendronate (Fosamax), ibandronate (Boniva), risedronate (Actonel), tiludronate (Skelid), clodronate (Bonefos), and etidronate (Didronel).

Additional oral symptoms experienced by postmenopausal women include burning oral sensations--especially on the tongue--altered taste sensations, and a decrease in salivary flow. If xerostomia is present, dental plaque may accumulate secondary to reduced salivary function/flow, leading to caries and, possibly, gingivitis. Salivary substitutes that help reduce oral dryness are listed in Table 1. 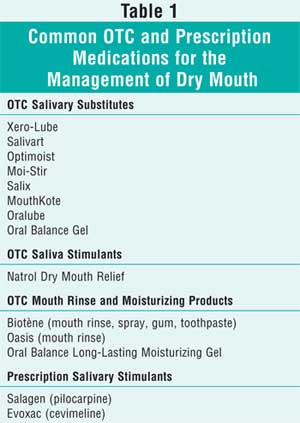 Coronary Heart Disease
During the late 1990s, a correlation was found between periodontitis and cardiovascular disease,20 which some researchers attributed to lifestyle changes. Others claim there is a systemic inflammatory response that causes an invasion of periodontal bacteria into the muscle cells in the arteries, resulting in platelet aggregation.21,22 A study in 2005 reported that women with coronary heart disease have worse oral health than those with no history of coronary heart disease.22 The authors concluded that although the reason is unclear, the inflammation in the periodontium may trigger and influence the atherosclerotic process.22,23 More research is needed to further justify these findings.

Summary
Sex hormones are associated with the onset and progression of periodontal disease. As levels of estrogen and progesterone elevate during puberty, menstruation, and pregnancy, so does the prevalence of gingivitis. Pharmacists with patients who are pregnant or planning to become pregnant should be counseled on proper oral home care and the importance of regular visits to a dentist or periodontist for a comprehensive periodontal exam. Also, it is important to try to identify periodontal risk factors and to offer treatment to help reduce the rate of premature births. Reduction of the inflammatory component may help decrease the risk of adverse pregnancies.24

New York is the first state to have guidelines for the oral health care of women of childbearing years. Specific advisory statements have been published assisting prenatal care providers and oral health professionals in the welfare of pregnant women. 25

18. American Association of Oral and Maxillofacial Surgeons. Position paper on bisphosphonate-related osteonecorsis of the jaws. September 25, 2006.