US Pharm. 2008;33(8):54-57. The American Diabetes Association (ADA) defines diabetes mellitus as a group of metabolic diseases characterized by hyperglycemia resulting from defects in insulin secretion, insulin action, or both. The chronic hyperglycemia of diabetes is associated with long-term damage, dysfunction, and failure of various organs, especially the eyes, kidneys, nerves, heart, and blood vessels.1 The ADA estimates that 20.8 million children and adults are diagnosed with diabetes mellitus, 176,500 of whom are younger than age 20.2 Previously known as juvenile diabetes and insulin-dependent diabetes, type 1 diabetes mellitus (T1DM) is the most common chronic disease of childhood and is often diagnosed in children presenting with symptomatic hyperglycemia.3 Although most attention is focused on type 2 diabetes mellitus (T2DM), the incidence of T1DM is rising worldwide.4 Type 2 diabetes mellitus results from insulin resistance combined with relative insulin deficiency, while T1DM is primarily the result of insulin deficiency. Therefore, the focus of pharmacologic treatment in T1DM is exogenous insulin replacement.

Pathophysiology and Clinical Manifestations
Pancreatic beta cells are responsible for the production of insulin, which regulates the amount of glucose in the body. Insulin regulates glucose metabolism by peripherally stimulating its uptake and inhibiting its production in the liver. During the fed state, a bolus of insulin is secreted from the pancreas, preventing hyperglycemia. Unrelated to food intake, a continuous basal secretion of insulin is also constantly released. Type 1 diabetes mellitus is a complex and multifactorial disease characterized by autoimmune-mediated destruction of pancreatic beta cells. Although genetic defects play a role in insulin production, autoantibodies against islet cells, insulin, glutamic acid decarboxylase, and tyrosine phosphatase 1A-2 and 1A-2 beta can be found in most cases of T1DM. Severe insulin deficiency results in requiring administration of exogenous insulin drug therapy. Unlike T2DM, several options are available to cure T1DM, such as islet transplantation along with immunosuppressive therapy or insulin gene therapy.

The clinical presentation of T1DM can manifest as classic new onset diabetes, silent diabetes, and diabetic ketoacidosis (DKA). Classic new onset diabetes is usually diagnosed in the outpatient setting and presents with symptoms of marked hyperglycemia, such as polydipsia, polyuria, polyphagia, weight loss, and lethargy. Silent diabetes is often diagnosed in children undergoing testing for T1DM due to a family history of the disease. Approximately 30% of children with T1DM present to the hospital with DKA.5 In addition to the signs and symptoms of classic new onset diabetes, patients with DKA can also present with dehydration, vomiting, mental status changes, and reduced arterial pH (i.e., acidosis) and serum bicarbonate.

Goals of Therapy
The goals of therapy in the management of  T1DM include achieving near normal blood glucose and glycated hemoglobin (A1C); preventing DKA and hypoglycemia; maintaining normal quality of life; understanding carbohydrate insulin dosing; and preventing acute and chronic diabetes complications.

In 2005, the first guidelines for the management of T1DM in children and adolescents were established. The ADA recommendations for glycemic control in T1DM are less stringent in pediatrics than in adults (TABLE 1). Children younger than 6 years are more likely to develop hypoglycemia; therefore, the thresholds for premeal and overnight blood glucose levels are higher in children.6 Although the ideal AlC target is less than 7%, most children and adolescents do not achieve this goal. As a result, the ADA recommends an A1C test result of less than 7.5% to prevent the risk of hypoglycemia and the feeling of failure in patients and families.

When administering drug therapy in children and adolescents with T1DM, a clear understanding of the physiologic and pharmacotherapeutic differences between children and adults is necessary to provide optimal therapy. For example, children require dosage adjustments as they gain weight, may require family members or legal guardians to administer drug therapy, may have periods of unpredictable food intake or varying levels of physical activity, and may not have the cognitive capacity to recognize hypoglycemic episodes.

Insulin Agents
Although potential new drug therapies are in development for the treatment of T1DM, insulin remains the standard of care. All patients who lack insulin production from pancreatic beta islet cells will require lifelong exogenous insulin replacement. Commercial sources of insulin include purified pork pancreas and, more commonly, human recombinant DNA technology. Insulins are categorized as rapid-acting (insulin glulisine, lispro, and aspart), short-acting (regular), intermediate-acting (neutral protamine Hagedorn [NPH]), and long-acting (glargine and detemir).  The currently available types of insulin based on onset of action, peak, and effective and maximal duration of action are summarized in TABLE 2. Although premixed combination products are available to simplify regimens, these agents require children to commit to fixed dosages, making it problematic in situations of unpredictable carbohydrate intake, exercise, or changes in weight and blood glucose. 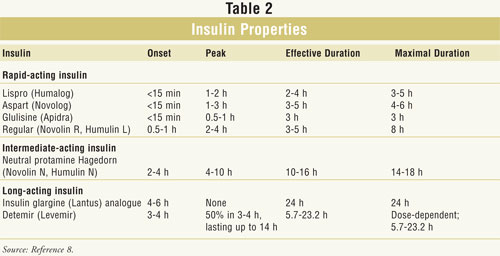 Long-acting Insulin Analogues: Because the administration of intermediate-acting insulin with concomitant rapid or short-acting insulin achieves goal A1C in only 50% to 70% of T1DM patients, the use of long-acting insulin analogues is recommended.13 Long-acting insulin imitates the constant, consistent basal release of insulin from the pancreas. Insulin glargine was the first FDA-approved long-acting analogue followed by detemir. Insulin glargine is manufactured as an acidic solution forming microprecipitants after administration, thus producing a peakless drug effect and allowing once-daily subcutaneous injections. Although insulin glargine is currently approved for children older than 6 years, pediatric studies in children as young as 2 years have shown efficacy with minimal hypoglycemic episodes.14 Unlike insulin glargine, detemir is approximately 98% reversibly bound to albumin, producing slow absorption and prolonged action. In comparison to intermediate-acting agents, insulin detemir has been shown to produce less nighttime and asymptomatic hypoglycemia in children and adolescents.15,16 Major adverse effects reported with the use of detemir include serious allergic reactions manifesting as rash, shortness of breath, tachycardia, and sweating.

Insulin Regimens: Both regular and rapid-acting insulins are administered preprandially to mimic the increased production of endogenous insulin associated with food intake, while the intermediate and long-acting insulins maintain constant basal levels of insulin. At the initiation of drug therapy, the recommended total daily dose (TDD) of insulin is 0.5 to 1 units/kg/day, with 50% of the dosage dedicated to basal insulin and the rest for rapid (prior to or with meals) or short-acting insulin (30 minutes prior to meals). Due to hormonal changes, pubertal adolescence usually requires higher doses of 1 to 1.5 units/kg/day. A number of studies have attempted to prove that regimens with rapid- and long-acting agents are more effective than regimens with short- and intermediate-acting agents in reducing A1C and preventing hypoglycemic events in children with T1DM. However, the results remain inconclusive and the issue continues to be controversial. Adverse effects to monitor in T1DM patients receiving insulin include hypoglycemia, lipodystrophy, injection site reactions, muscle weakness, weight gain, and fatigue.

Some common initial insulin regimens for T1DM include

1) Intermediate-acting PLUS regular insulin given twice a day

2) Glargine plus rapid-acting insulins given with meals

3) Detemir given once or twice a day plus rapid-acting insulins given with meals.

Besides maintaining normal serum glucose levels, preventing complications from T1DM is another goal of therapy. As a result, the Diabetes Control and Complication Trial (DCCT) evaluated the risk of long-term diabetic complications such as retinopathy, nephropathy, and neuropathy in children with T1DM receiving intensive insulin regimens.17,18 The trial defined intensive insulin regimen as targeting premeal blood glucose 70 to 120 mg/mL, postprandial blood glucose less than 180 mg/mL, and an A1C less than 6.05%. Results from the DCCT suggested that intensified regimens could reduce the risk of T1DM-associated complications; however, there was a significantly higher risk for serious hypoglycemic events. The Epidemiology of Diabetes Interventions and Complications study, a follow-up to the DCCT, also concluded that intensive treatment reduced the risk of cardiovascular events.19,20 Although intensive insulin regimens appear more favorable in reducing long-term complications, the risk of hypoglycemic events minimizes their utility in pediatric patients. As a result, the ADA recommends higher thresholds for targets of blood glucose and A1C (TABLE 1).

Adjunctive Therapy
A number of patients with T1DM cannot maintain target blood glucose levels with currently available insulin regimens. As a result, other pharmacologic treatment options can be considered. In 2005, the FDA approved pramlintide (Symlin) for adjunctive therapy for type 1 and 2 diabetes patients who failed to achieve target blood glucose levels with prandial insulin therapy.21 As a synthetic analogue of human amylin, pramlintide works by slowing carbohydrate absorption by delaying gastric emptying time, reducing postprandial glucagon secretion, and decreasing caloric intake via appetite suppression. In adults with T1DM, pramlintide is dosed at 15 mcg subcutaneously immediately prior to meals. When no significant nausea is seen for at least three days, the dose may be increased by 15-mcg increments up to 30 or 60 mcg as tolerated. Additionally, the patient's concomitant preprandial rapid-acting or regular insulin dose is reduced by 50%. Although this medication is  not currently approved in pediatrics, Heptulla and colleagues evaluated the efficacy and safety of pramlintide 30 to 45 mcg plus insulin boluses in children age  12 to 18 with T1DM.22 Results revealed that pramlintide significantly suppressed glucagon production, and reduced postprandial hyperglycemia and A1C by a mean of 0.67%. As a result, pramlintide appeared to be beneficial for postprandial glycemic control in adolescents. Like other medications, pramlintide is not without adverse effects. A major adverse effect associated with pramlintide, stated as a black box warning, is severe hypoglycemia occurring three hours after injection. Other side effects include nausea, vomiting, anorexia, and injection site pain.

Insulin Pump Therapy
First identified in the late 1970s, insulin pump therapy usage has been increasing and is becoming more common in the pediatric population.23 Insulin pump, also known as continuous subcutaneous insulin infusion (CSII), is a computerized, battery-driven portable device that administers preprogrammed basal rates and bolus doses of insulin. Candidates for insulin pump therapy include patients who are interested or who have the following24:

• More than the equivalent of four injections per day

Several advantages of CSII in T1DM include the use of rapid-acting insulin analogues, lifestyle flexibility due to fewer injections, reduction of hypoglycemic events, and significant reduction in A1C compared to multiple daily insulin injections.25,26 Disadvantages of CSII include pump failure, device complexity, cost, and user self-consciousness.

Although T1DM management in pediatrics can appear overwhelming, pharmacists need to consider pediatric-specific blood glucose goals, drug selection, and dosing regimens compared to adults. Insulin therapy remains the standard of care for the treatment of T1DM. Goals of therapy should include obtaining target blood glucose and A1C levels based on the ADA recommendations, maintaining normal quality of life, and preventing acute and chronic complications. Pharmacists can play a major role in optimizing insulin drug regimens, selecting the most appropriate insulin, and counseling for adverse effects. Future studies are necessary to determine whether noninsulin therapies are effective for the treatment of T1DM. Insulin pump therapy is becoming more favorable.

13. Danne T, Mortensen HB, Hougaard P, et al. Persistent differences among centers over 3 years in glycemic control and hypoglycemia in a study of 3,805 children and adolescents with type 1 diabetes from the Hvidore Study Group. Diabetes Care. 2001;24:1342-1347.

17. The DCCT Research Group. The effect of intensive diabetes treatment on the development and progression of long-term complications in adolescents with insulin-dependent diabetes mellitus. N Engl J Med. 1993;329:977-986.

18. The DCCT Research Group. The effect of intensive diabetes treatment on the development and progression of long-term complications in adolescents with insulin-dependent diabetes mellitus: the Diabetes Control and Complication Trial. J Pediatr. 1994;125:177-188.

19. DCCT/EDIC Research Group. Beneficial effects of intensive therapy of diabetes during adolescence: outcomes after the conclusion of the Diabetes Control and Complications Trial. J Pediatr. 2001;139:804-812.