Pharmacists who practiced in the 1970s may recall Povan, a red dye–derived medication once available for pinworm, and the seemingly endless number of prescriptions dispensed for it. This is in stark contrast to today's practice--prescriptions for anthelmintics to treat pinworm are rare. However, that does not necessarily mean that the prevalence of pinworm has decreased; since public awareness of this ancient parasite has dropped, it is less likely to be recognized when it is present.

Prevalence of Enterobiasis
Infestation with pinworm ( Enterobius vermicularis) is known as enterobiasis. This is the most common helminth infestation in the United States, with an estimated 42 million infested, translating to 14% of the population.1,2 Investigators in other countries report much higher prevalences, such as 29% (Denmark), 39% (Thailand), 50% (England), and 61% (India).1

Causative Agent
E. vermicularis is a white nematode (roundworm) with a length of 8 to 13 mm for the adult female (about the length of a standard staple) and 2 to 5 mm for the adult male.3 Its width is about 0.5 mm.1 The ova are oval objects appearing microscopically to have three sides, approximately 55 x 25 mcm.1

An infested child might wear bed clothing that is sufficiently loose for the eggs to fall away as the host sleeps. If the eggs drop away at night, they could be found on sheets or blankets. The eggs are quite light and can be blown about by human activity, wind, or such activities as snapping egg-contaminated sheets while making the infested child's bed. Inhaled eggs may not enter the lungs, due to their weight and size, but may be deposited in the oropharynx, where they are easily swallowed.2

A second method of spread can occur during the day following ovipositing. The eggs can be easily removed from the anal skinfolds by scratching; the child then has viable eggs on his or her fingers or under the nails. As the child plays during the day, the eggs may be deposited on surfaces that other children's hands will have access to. Investigators visited homes and schools of infested children and identified pinworm eggs in 90% of samples taken from such diverse surfaces and locations as bars of soap, pet fur, swimming pools, walls of school dining rooms, and house dust samples. 5 If other children touching these surfaces subsequently place their fingers in their mouth to suck their thumb or bite their nails, the transmission loop is complete. Unfortunately, the child who originally had the infestation may also place his or her fingers inside the mouth, becoming reinfested and helping maintain a heavy parasite load--a process known as autoinfection.1

Clothing worn the next day might also be loose enough to allow the eggs to fall away and out of the clothing as the child plays and carries out routine activities. The eggs could deposit on carpets, floors, or playground equipment, or in a sandbox. Again, placing fingers in the mouth allows transmission to occur.

After the patient is infested, pinworms must hatch and mature before ovipositing begins. The average time from ingestion to detection of eggs in the perianal areas is four to six weeks.1 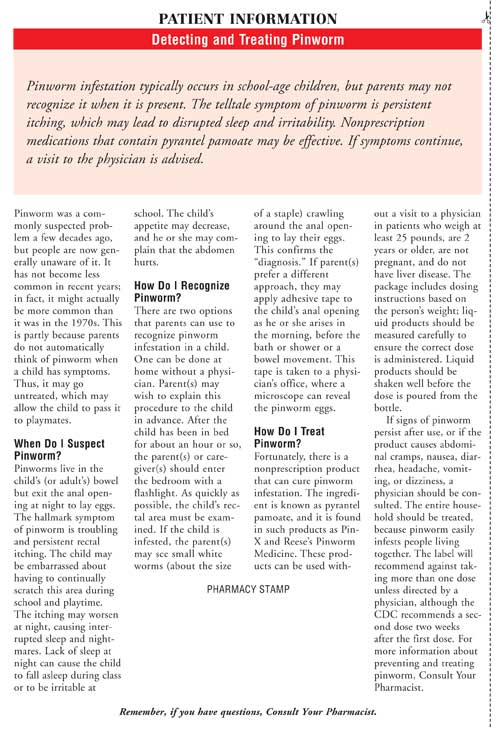 Epidemiology
Pinworm infestation is linked to age, being most common in children of school age, followed by preschool children.6,7 Adults are the least common age-group to experience enterobiasis, with the exception of mothers whose children are infested.7

Children attending day care and other institutions are at greater risk for pinworm because of the high potential for transmission to those who are closely associated with the first case in the household. While some authors assert that pinworm crosses all social barriers, others state that poverty and poor personal hygiene increase the risk of infestation. 1,8,9 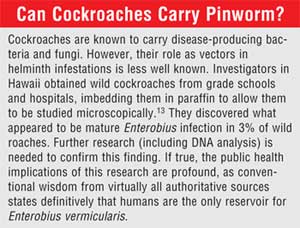 Prevention of Enterobiasis
Parents of patients infested with pinworm may ask the pharmacist how to prevent a future problem and how to maintain cleanliness during an ongoing episode. Several commonsense steps can be followed to decrease the risk of reinfection. Most require added attention to hygiene.6,7 For instance, the patient should shower every morning to decrease the chance of spreading the parasite to others and of retroinfection. Showering is preferable to bathing, since soaking in the bath with eggs floating in the water could conceivably allow them to enter the genitourinary tract. Patients should be urged to change underwear and sleepwear each day and night. Each period of wear should be followed by thorough washing. While the CDC advises against the practice, sheets could be washed daily to remove eggs that fell onto them at night. If sheets are not washed every day, they should be pulled back, and all blinds and curtains should be opened during the day, as pinworm eggs are sensitive to sunlight. Nails should be trimmed short. Children and adults must strive to keep their fingers out of their mouths at all times. Hands must always be washed thoroughly after bowel movements, especially during a bout of enterobiasis. Hands should be washed before eating and after changing diapers. Children must be urged to stop scratching their anal area, to prevent contaminating their hands and to reduce their risk of excoriating the skin. Dressing them in close-fitting underwear and cotton gloves can reduce or stop nocturnal scratching. The floors should be vacuumed every other day, since eggs can survive for two weeks on the carpet. Children may be allowed to return to day care after the first treatment with pyrantel pamoate, if they have bathed and nails are trimmed and cleansed.

Recognition/Treatment
The patient leaflet describes steps to diagnose and treat enterobiasis. Patients may wish to provide a stool sample; however, pinworms are seldom found in stool specimens, as they are not usually released into the fecal stream.

The leaflet describes use of the only FDA-approved anthelmintic: pyrantel pamoate. The medication paralyzes the worm, causing it to lose its grip on the bowel lining and to be flushed from the body. Controversy surrounds the issue of FDA labeling versus recommendations from the CDC. The discrepancy stems from the fact that pyrantel pamoate is effective only for live worms and does not affect eggs or larvae. Thus, immature larvae and eggs that hatch after the first treatment remain fully viable and capable of beginning the infestation anew. The FDA-approved labeling states that the patient should take only one dose and take other doses only under the advice of a physician. However, the CDC states on a Web page devoted to patients: "With either prescription or over-the counter drugs.[sic] You should consult your health care provider before treating a suspected case of pinworm. Treatment involves a two-dose course. The second dose should be given 2 weeks after the first."7 This statement to patients effectively countermands and invalidates the FDA-approved labeling and gives tacit approval to the pharmacist to recommend a second dose.

Conclusion
Pinworm is a common but seldom-recognized condition. An informed pharmacist can help infested patients obtain appropriate treatment and prevent spread to other family members and playmates.