Although relatively common, vaginal bleeding is considered abnormal when reported in a woman who has passed the onset of menopause.1 In approximately 20% to 30% of cases of postmenopausal vaginal bleeding, the cause may be attributed to endometrial cancer or atypical endometrial hyperplasia.2 Additional causes include estrogen or progesterone therapy (i.e., hormone replacement therapy [HRT]) and genital atrophy due to low estrogen levels.2 Age and menstrual status influences the cause of abnormal vaginal bleeding; in postmenopausal women, structural disorders are common underlying causes (TABLE 1).3 Although postmenopausal vaginal bleeding remains a cardinal symptom of endometrial cancer, case reports have shown it may be an unusual presenting sign of other diseases as well, including non-Hodgkin lymphoma and pancreatic adenocarcinoma.4,5 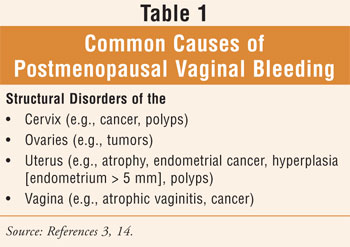 Regardless of the cause, excessive or prolonged bleeding may result in iron deficiency anemia, a condition that may be especially problematic in the elderly.2,3 Pharmacists should refer for evaluation any women over the age of 50 who is experiencing vaginal bleeding for more than six months after her last normal menstrual cycle.3 One recent study from The Netherlands looked at the relationship between age, time since menopause, and endometrial cancer in women with postmenopausal bleeding.6 The researchers reported the risk of (pre)malignancy of the endometrium is low in women younger than 50 years, increases considerably until age 55, and then rises only modestly with further increasing age.6 When unexplained vaginal bleeding occurs, malignancy should be ruled out; persistent postmenopausal vaginal bleeding should be investigated aggressively.2,7

Uncommon Causes of Abnormal Vaginal Bleeding
International case reports have addressed rare occurrences of diseases presenting with an unusual mode of presentation--postmenopausal vaginal bleeding as the presenting symptom. While primary vaginal cancer constitutes only 1% to 2% of all female genital malignancies, metastatic disease to the vagina from other pelvic organs or the colon is more common.5 Although rare, symptomatic vaginal bleeding in postmenopausal women due to pancreatic adenocarcinoma metastasizing exclusively to the vagina has been reported.5 In a separate case, a 60-year-old woman presented primarily with postmenopausal bleeding, which was considered indicative of endometrium or cervical carcinoma.4 Initially, with conventional diagnostic testing, she was found to have vaginal fibrosis and inflammatory tissue only.4 Further investigation through immunohistochemistry, however, revealed non-Hodgkin lymphoma (usually presenting with lymph-adenopathy, fever, night sweats, and weight loss) with genital involvement.4

Whereas very few reports have described tuberculosis (TB) in the female genital tract, a case of TB mimicking cervical carcinoma has also been documented.8 A woman of 67 years presented with vaginal discharge, abdominal discomfort, and a pelvic mass.8 Researchers point out that TB is associated with a high degree of inflammation, which possibly appears as a malignancy on a gynecologic exam or diagnostic image.8 Further, these researchers note that despite the rare incidence of cervical TB, it should be addressed in the differential diagnosis upon suspicion of cervical carcinoma.8

Although the atrophic postmenopausal endometrium is thought to poorly support tubercle bacilli, probably because of the decreased vascularity of the tissues, a case of squamous cell carcinoma of the cervix coexisting with endometrial TB presenting as postmenopausal bleeding has been reported.9,10 Rajaram et al concluded that TB complicating a case of malignant disease may occur in regions with a high prevalence of disease; given the resurgence of tuberculosis worldwide, this association may not be that rare. 9,11

Diagnosing and treating TB in a patient with a malignancy takes on importance since a high mortality has been reported in patients with comorbidity.9,10 Güngördük et al reported a case of endometrial tuberculosis with postmenopausal vaginal bleeding and underscored its rarity by indicating that while a significant percentage of cases of TB in developing countries are extrapulmonary, including TB of the genitourinary tract, patients with genital TB are usually young women detected during work up for infertility.10

History and Evaluation
A thorough history should identify medication therapy (e.g., estrogens), past and present morbidity, and any previous gynecologic conditions.2 The physical evaluation should rule out trauma, bleeding from atrophic sites, and tumors (e.g., cervical, vaginal, vulvar) achieved through a pelvic examination including a Pap test.2 Diagnostic testing may include endometrial biopsy, dilation and curettage (D&C), and transvaginal ultrasonography.2 If bleeding is unusually heavy, has lasted several days, or if symptoms of anemia or hypovolemia are present, a CBC is ordered to measure hemoglobin and hematocrit.3
Treatment
Treatment of postmenopausal vaginal bleeding is determined by the cause and should be tailored to the individual.2,7 When vaginal bleeding continues without explanation through biopsy results, D&C with hysteroscopy is usually necessary.2 Persistent bleeding requires aggressive investigation to rule out malignancy.2 Specific treatment for cancer is outlined in Reference 2.

Abnormal Bleeding Due to Genital Atrophy: Approximately 50% of postmenopausal women experience symptoms of urogenital atrophy secondary to estrogen deficiency.12 Vaginal bleeding in women who do not have cancer and are not taking estrogen is often treated initially with estrogen to rule out bleeding secondary to genital atrophy.2 Typically, vulvovaginal atrophy can be defined as one or more of the following: vaginal dryness, itching, irritation; pain on urination; bleeding on intercourse; or pain on intercourse (dyspareunia).13 Associated symptoms of the lower urinary tract include urinary urgency and frequency, urethritis, and recurrent urinary tract infections.12 Local or systemic estrogen therapy provides symptom relief from significant vaginal dryness secondary to vaginal atrophy for most women.12 A recent large population-based study provides evidence of an association between vulvovaginal atrophy and overall female sexual dysfunction and its subtypes (i.e., desire difficulty, arousal difficulty, and orgasm difficulty).13 Researchers Levine et al concluded that therapies aiming to decrease symptoms of one condition potentially may relieve symptoms of the other.13

Topical estrogen in of vaginal cream form (1 to 3 times per week for maintenance), vaginal tablet (twice weekly for maintenance), or estrogen-infused vaginal ring (remaining in place for 90 days) dosage forms is used to treat vaginal dryness and dyspareunia.13,14

Use of low-dose micronized 17 beta-estradiol usually does not require the concomitant use of progestogen therapy; however, ongoing use of conjugated equine estrogen (CEE) (e.g., vaginal creams and other dosage forms) that promotes endometrial proliferation in women with an intact uterus requires intermittent progestogen supplementation (e.g., for 10 days every 12 weeks).12 In females older than 75 years, data indicate a higher incidence of stroke and invasive breast cancer with the use of CEE.14 Careful, individualized dosing, ongoing monitoring, and re-evaluation and attempts to discontinue or taper medication (e.g., at 3- to 6-month intervals) are important dosing recommendations since vaginal atrophy requires long-term estrogen therapy.12,14

Abnormal Bleeding Resulting from Estrogen or Progesterone Therapy: For vaginal bleeding in women already receiving HRT, dosage adjustment may be necessary: the estrogen dose may need to be decreased or the progesterone dose increased.2 Patients receiving HRT should be re-evaluated over time for continued appropriateness of therapy. A thorough medical history should include an attempt to identify any contraindications to continued HRT therapy (e.g., history or current thrombophlebitis or thromboembolic disease, hepatic disease, carcinoma of the breast, estrogen-dependent tumor [except in appropriately selected patients being treated for metastatic disease]) as a patient's condition may have changed since the initiation of therapy.14,15

Estrogens should not be considered first-line agents for the prevention of osteoporosis due to increased risk of breast cancer, heart disease, stroke, and deep-vein thrombosis.14 Estradiol and a variety of combination therapies (e.g., ethinyl estradiol with norethindrone, ethinyl with norgestimate), however, have been approved for the prevention of osteoporosis.14 Along with adequate intake of dietary calcium (e.g., dairy products), increased intake of vitamin D (e.g., fortified dairy products, cod, fatty fish), weight bearing exercise (e.g., walking) as tolerated, and calcium supplementation, alternatives to HRT (e.g., bisphosphonates [alendronate, ibandronate, risedronate]; the selective estrogen receptor modulator, raloxifene) should be considered, if appropriate, for osteoporosis prevention.14 Contraindications to the bisphosphonates (e.g., abnormal esophageal peristalsis, hypocalcemia, severe renal impairment, inability to stand/sit for 30 minutes) and raloxifene (e.g., active thromboembolic disorder and prolonged immobilization [e.g., postoperative recovery, prolonged bed rest]) should not be overlooked when formulating an appropriate pharmaceutical care plan.14

Pharmacists, as accessible health care providers, are often approached by patients who report symptoms to them prior to visiting their primary care provider. Counseling opportunities also arise when patients discuss their medication regimens with pharmacists. Clinicians, including pharmacists, should be aware of common and unusual modes of presentation of illness so as not to overlook potential lethal causes of postmenopausal vaginal bleeding.