Allergic diseases are important causes of morbidity in the United States. The National Ambulatory Medical Care Survey reported that allergic rhinitis, asthma, and contact dermatitis or eczema were among the 15 most common diagnoses made in patients 11 to 20 years old. In addition, injections of allergenic extracts were the most commonly prescribed drug in those age 11 to 14 years and the second most common in those 15 to 20 years old. The number of visits to office-based dermatologists was 33.8 million, and the number of visits to office-based physicians for skin rash was 11.5 million. 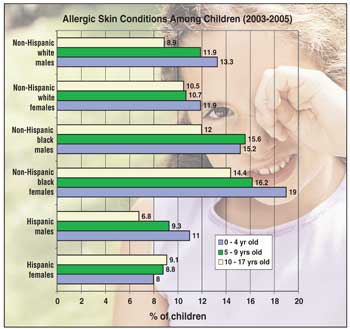 The determination of whether a clinical syndrome may have an allergic etiology was studied by the use of allergy skin tests. Introducing an allergen into the skin of an allergic individual resulted in a cutaneous inflammatory reaction within 10 to 20 minutes. The National Health and Nutrition Examination Survey (NHANES) studied skin-test reactivity on a national sample of a noninstitutionalized population. Each participant was skin tested against eight allergens: house dust, alternaria, cat, dog, mixed giant and short ragweed, oak, perennial rye grass, and Bermuda grass.