Sexuality and sexual function are important indicators of quality of life in all stages of adulthood. Regardless of age, every individual harbors the need for intimacy, physical affection, and sexuality. Despite this basic fact, many studies on sexuality have ignored the attitudes and behaviors of older adults, focusing instead on those adults in their reproductive years.1

Pharmacists, without realizing it, may harbor prejudiced attitudes about the sexuality of the senior citizens for whom they provide care. They may be embarrassed to discuss sexual habits with seniors or feel that these issues are not important to older patients. As front-line health care providers, pharmacists must increase their awareness of the important role sexuality has in the overall well-being of adults at all ages. This article focuses on drug therapies available to optimize the sexual well-being of senior citizens and the possible role of the pharmacist in improving this vital area of quality of life.

Effects of Aging on Sexuality Both men and women experience gender-specific influences on sexuality that will be discussed separately. Gender-neutral effects on sexuality in seniors include depression, coronary disease, vascular disease (e.g., angina, diabetes), mobility and flexibility issues, lack of socializing opportunities, loss of life partners, and, perhaps most important to pharmacists, the increased use of OTC and prescription medications in this age-group.3 Common classes of medications that can cause sexual dysfunction in seniors are included in Table 1.

Assessing the Senior Patient
The first step in optimizing the sexual well-being of seniors is to incorporate the topic into the basic health care assessment. Pharmacists should not be shy about broaching the subject with seniors and should listen attentively to their responses. The discussion should include physical sexual function, an evaluation of high-risk sexual habits, and an overview of the patient's beliefs regarding sexuality.

High-Risk Sexual Behaviors
Cardiovascular health is an important consideration when planning to improve sexual dysfunction in seniors. Patients who have abandoned sexual activity due to dysfunction may not be prepared for the cardiac stress that may follow improved sexual function. Pharmacists should be especially aware of patients with preexisting angina, as sexual activity is an important trigger for anginal episodes. In addition, patients with angina may have been prescribed nitrate therapies, contraindicating the concurrent use of phosphodiesterase type 5 (PDE-5) inhibitors, designed to treat erectile dysfunction.

Sexually transmitted diseases (STDs) are much more commonly diagnosed among those younger than 50, but the risk of STDs among seniors should not be discounted. Long-term diseases such as genital herpes and untreated syphilis are the most common STDs in older adults.4 Discussion of safe sex practices, such as the use of latex condoms, is even more important if the patient is resuming sexual activity after the loss of a lifelong monogamous partner. Patients in such a situation may be naïve about the need for and the techniques of safe sex.1 STDs are also a key indicator in the possibility of sexual assault in nursing home patients. It may be an especially important clue if a nursing home resident with diminished mental capacity presents with an STD.4

Sexual Dysfunction
When evaluating sexual dysfunction in patients, it is important to obtain a complete social, sexual, and medical history. Ideally, the patient's significant other should be involved with this assessment to determine which therapy would be most appropriate and acceptable for the patient and their relationship. A comprehensive physical examination with laboratory screening is appropriately performed by the patient's physician (Table 2). The patient's primary care provider often makes a diagnosis without a comprehensive work-up; thus, an underlying pathology may be overlooked. 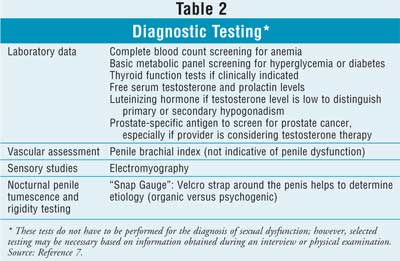 Sexual Dysfunction in Senior Men
Sexual dysfunction can affect men of any age; however, it is more prevalent with advancing age and comorbidities. By the end of 2025, erectile dysfunction is proposed to affect more than 300 million men.5 Understanding possible etiologies and available pharmacotherapuetic options, in addition to the individual patient's situation, allows providers to optimize treatment approaches.

The origin of sexual dysfunction may be organic, psychogenic, or "mixed" in nature. Organic causes may be pharmacologic, hormonal, neurologic, or vascular (Table 1). Improving a current disease state may result in decreased problems of sexual dysfunction. However, this dysfunction may not be reversible. According to one study, midlife changes involving smoking cessation, weight loss, and reduced alcohol consumption may not improve or correct sexual dysfunction.6 The term sexual dysfunctionincludes problems with libido, ejaculation, erectile function, or a combination of these factors. Decreased libido is often present in patients with hypotestosteronemia or hyperprolactinemia or psychogenic causes. Retrograde ejaculation is a disorder more frequent in older men, especially among patients who undergo prostate resection or have neurogenic disorders. Erectile dysfunction is the most common sexual dysfunction and is defined as failure to achieve and/or maintain an erection of sufficient duration and rigidity to satisfy intercourse through vaginal penetration in more than 25% of sexual attempts.7

Oral Therapies for Erectile Dysfunction: PDE-5 inhibitors have revolutionized therapy for erectile dysfunction. The three products available are sildenafil citrate (Viagra), vardenafil HCl (Levitra), and tadalafil (Cialis) (Table 3 ). These medications require sexual arousal for success. During sexual arousal, nitric oxide and increased levels of cyclic guanosine monophosphate (cGMP) cause dilation within the vasculature of the corpus cavernosum. PDE-5 is an enzyme that breaks down cGMP. PDE-5 inhibitors delay the degradation of cGMP and allow the patient to attain and maintain a satisfactory erection. Structurally, tadalafil varies from sildenafil and vardenafil; thus, there are differences in their pharmacokinetic profiles.8-10 Prescribing information recommends that patients take tadalafil 25 to 60 minutes prior to sexual activities.11-13 However, numerous studies have demonstrated successful erections within 20 minutes after ingesting tadalafil.14-16 Tadalafil has an advantage for patient spontaneity due to its long half-life. Rates of absorption for sildenafil and vardenafil are affected if taken with food, resulting in delayed absorption. If food is taken with these medications, a low-fat meal is recommended.

Therapy discontinuation may be due to lack of efficacy; however, tolerability is often an issue. Most side effects can be attributed to the vasodilatory effects at various parts of the body. There are 11 identified PDE isozymes. Although the PDE-5 inhibitors are potent and selective for the PDE-5 isozyme, they also display specificities for other PDE isozymes. Both sildenafil and vardenafil provide inhibition of PDE-6 isolated in the retina, causing difficulty of light transfer through nerve impulse. Vision abnormalities are limited and not well documented with tadalafil due to its specificity of PDE-5 isozyme over PDE-6 isozyme (>700 times).17,18 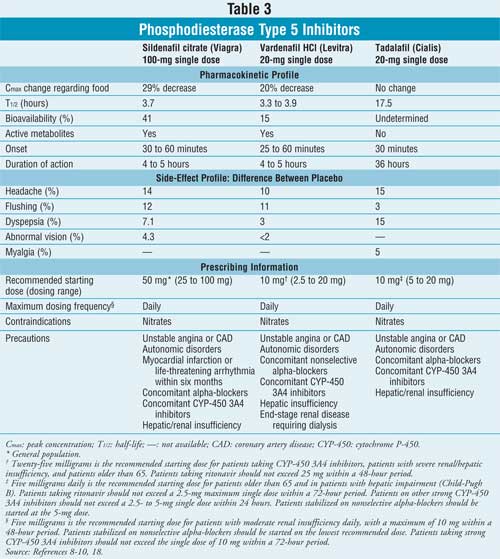 Apomorphine is a central-acting dopamine receptor agonist that enhances activation of the neurons during sexual stimulation. Efficacy rates of successful erections range from 48% to 55%. Yet, in a crossover study comparing apomorphine to sildenafil, success rates were far superior with sildenafil (35% vs. 75%, respectively).18,19 Apomorphine appears to be an excellent first-line agent for patients who have contraindications to PDE-5 inhibitors, but the sublingual formation is not available in the United States.

Although nitroglycerin paste applied directly to the penis has been shown to increase rigidity, absorption into the female partner caused headaches.7 Alprostadil  (prostaglandin E1 )  can be administered as an intracavernosal injection or by intraurethral suppositories. Complications consist of penile pain, prolonged erection, priapism, and fibrosis.18 Intraurethral pellets of alprostadil were marketed as an alternative to intracavernosal injections. Due to absorption issues, higher doses of alprostadil are necessary by intraurethral delivery.

Mechanical devices and penile prostheses may be an option for patients who are not candidates for these therapies. Since the placement of penile implants requires the removal of some or all erectile tissue, this treatment option is irreversible. Therefore, most providers will offer penile implants as a last-line therapy.

Sexual Dysfunction in Senior Women
Following menopause, many women experience physiologic changes that negatively impact their sexual health, and, as a result, nearly half of postmenopausal women are affected by some degree of sexual dysfunction.3 Common changes due to estrogen deprivation of the postmenopausal state include vaginal dryness, reduced vaginal elasticity and muscle tone, uterine atrophy, decreased size and sensitivity of the clitoris, and bladder insufficiency and/or intercourse-related urinary incontinence. These factors may contribute to decreased arousal, uncomfortable or painful intercourse (dyspareunia), embarrassment issues, and/or the inability to achieve an orgasm (anorgasmia).

An unfortunate disparity between genders is that some cultures are less accepting of sexuality in senior women than in senior men. In patriarchal societies (i.e., Asian, Latin, Native American), it has been reported that a woman's sexual urges are expected to decline after menopause, as she is no longer able to reproduce. Many cultures also discourage sexuality among widowed women, while this type of restriction is not imposed upon men who lose their wives. Pharmacists must be sensitive to these cultural issues but should not neglect a senior woman who wishes to continue to be sexually active despite the views of her cultural community. 3

Another gender-based disparity is that due to their longer average lifespan, women tend to suffer more than men from a lack of available sex partners later in life. Thus, older women may experience sexual dysfunction not from disability or disease but from lack of opportunity.

Drug Therapies for Women: The use of PDE-5 inhibitors, effective in treating erectile dysfunction in men, is much more controversial in treating sexual dysfunction in women. The use of sildenafil has been shown to improve localized genital blood flow in postmenopausal women, but this has often not translated into perceived improvements in sexual function or the ability to achieve orgasm.20

The dopamine agonist apomorphine may also help women suffering from sexual dysfunction; however, the benefits of this agent have been demonstrated primarily in premenopausal women. In one small trial, it was shown to mildly improve the symptoms of hypoactive sexual desire and sexual arousal disorder.21

Often, the only therapy needed to significantly improve postmenopausal dyspareunia is the use of vaginal lubricants during intercourse. Water-based lubricants such as Astroglide or K-Y Jelly should be recommended to women who follow safe-sex practices by having their male partner(s) use latex condoms. The addition of estrogen-containing vaginal creams may also be of benefit; they not only correct vaginal dryness, but also reverse some genitourinary effects associated with postmenopausal estrogen deficiency. Women should be counseled that these creams are not appropriate for use as lubricants during intercourse, as sexual activity may displace the medication, but are most appropriately used overnight.

Conclusion
Sexual health is important to patients of all ages but may be mistakenly overlooked by pharmacists when dealing with older patients. Pharmacists have an important role in supporting the quality of life in senior patients by being open to discussions on sexual health and recommending appropriate medications and nondrug therapies that may improve patients' sexual function.