Sleep apnea is very common--an estimated 12 million Americans have been diagnosed with the condition. Because sleep apnea frequently goes undiagnosed, many experts agree that millions more Americans could have the condition.1-3 In general, sleep apnea occurs more often in males than females (approximately 24% of males and 9% of females have sleep apnea) and in adults older than 40 years. However, anyone can have sleep apnea, regardless of age. 1,3 Because patients with sleep apnea have a high risk of morbidity and mortality, it is important that educational materials regarding the condition be made available to help them better understand and manage their diagnosis. 3,4 This patient-focused article was designed to assist pharmacists in counseling patients on sleep apnea.

What Is Sleep Apnea?
Sleep apnea is a serious disorder in which people stop breathing repeatedly during sleep. These gaps in breathing--known as apneas--usually last at least 10 seconds and are commonly accompanied by snoring, especially in obstructive sleep apnea. 2 (The Greek word apneameans without breath.)1 Sleep apnea can disrupt sleep-wake cycles and prevent patients from getting restful sleep. Consequently, people suffering from sleep apnea frequently complain of daytime sleepiness.3

What Are the Types of Sleep Apnea?
Sleep apnea can be categorized into three types: obstructive, central, and mixed.1-8 In all three, people with untreated sleep apnea stop breathing repeatedly during their sleep, sometimes hundreds of times during the night and often for a minute or longer.2

Central sleep apnea usually occurs in patients who have experienced some form of central nervous system insult (e.g., a stroke or a neuromuscular disease such as amyotrophic lateral sclerosis or encephalitis). This apnea has also been reported in patients who have heart failure and other cardiac and pulmonary diseases. 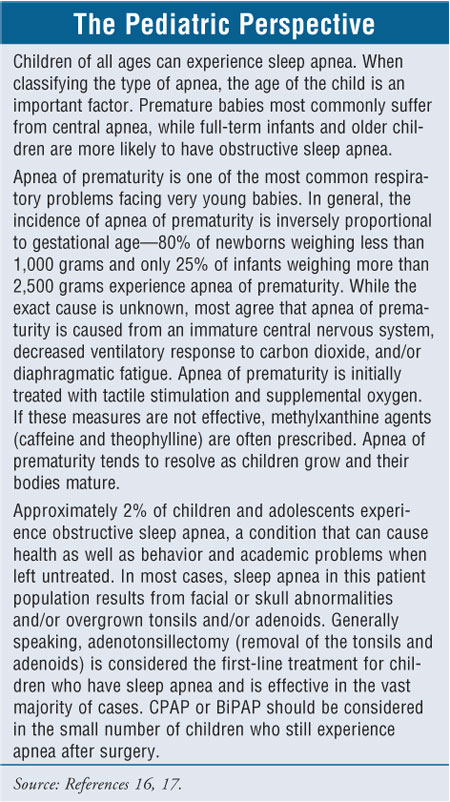 What Are the Symptoms of Sleep Apnea?

Many people with obstructive sleep apnea complain that they wake up with an extremely sore and/or dry throat or that they have woken with a choking or gasping sensation. Patients may even admit to waking themselves with their own snoring. Many patients with obstructive sleep apnea are extremely tired during the day because of sleep-wake cycle disruptions. Additional symptoms include morning headaches, forgetfulness, depressed mood, and decreased interest in pleasurable activities (e.g., sex).3,6

What Are the Consequences of Untreated Sleep Apnea?

How Is Sleep Apnea Diagnosed?

Patients concerned about sleep apnea are encouraged to compute their Snore Score (Table 1). Those who answer yes to any of the questions on the Snore Score should discuss their symptoms with a physician.2 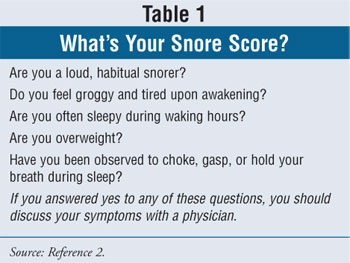 To determine whether a patient may have sleep apnea, a complete history and physical examination is necessary. Patients should be assessed for abnormalities in the soft palate or upper airways, upper body obesity, and wide neck measurements. If sleep apnea is suspected, a sleep study, or polysomnography, should be considered, especially in patients who have serious medical conditions that could be worsened or caused by sleep apnea (e.g., heart disease, high blood pressure, heart failure, diabetes, chronic headaches, epilepsy, obstructive lung disease, severe acid reflux) or those who experience decreased quality of life or increased risk of accidents secondary to the sleep apnea.

Sleep studies--assessments of brain activity, eye movements, muscle activity, heart rate, respiratory effort, airflow, and blood oxygen performed during an overnight stay at a sleep center--are considered the gold standard for diagnosing sleep apnea. 7 However, the tests can be expensive and are not always covered by insurance. For this reason, individuals who have no health risk factors and no impairment of quality of life or increased risk for accidents do not typically require sleep studies.8

How Is Sleep Apnea Treated?
It is imperative that patients who have been diagnosed with sleep apnea seek treatment, as untreated sleep apnea can negatively affect health. It may increase the risk of high blood pressure, heart attack, and sudden death. On the other hand, effective treatment of sleep apnea may decrease fatigue, improve sleep quality, decrease blood pressure in patients with hypertension, and lead to weight loss in obese patients.8 Treatment of sleep apnea must be individualized and depends upon the severity of the apneic spells and the amount of sleep disruption.3

Lifestyle Changes: For patients with mild obstructive sleep apnea, lifestyle changes may alleviate the condition.8 Overweight patients are encouraged to lose weight--a 10% weight loss can reduce the number of apneic events for most patients.5 Patients should be encouraged to avoid agents such as alcohol, antihistamines, sedatives, and hypnotics that make the airway more likely to collapse during sleep and prolong apneic periods.3,5 Additionally, changing sleep positions (from supine to lateral) may promote regular breathing in patients who have at least twice as many respiratory events in supine positions compared with lateral positions. Tennis balls attached to the pajamas or wedge pillows may be used to train patients to sleep in lateral positions.10 Finally, remind patients of the importance of adopting good sleep habits. Tell them to keep their bedroom cool, quiet, comfortable, and free of unnecessary light; to go to bed at the same time each night; to get up at the same time each morning; and to avoid using a computer or watching television in bed.13

Drug Therapy: For the most part, drug therapy has not demonstrated much benefit in the treatment of sleep apnea. In general, medications should be reserved for patients with mild disease or who resist lifestyle changes. Antidepressant medications, such as protriptyline and fluoxetine, have shown only minimal promise in patients with obstructive sleep apnea. In theory, these products reduce the frequency of apneas and increase oxygen saturation.3,10 Acetazolamide may be useful for some patients with central sleep apnea, because it induces a metabolic acidosis that stimulates respiratory drive. 3,10,14

Devices: Devices that provide continuous positive airway pressure (CPAP) during sleep are considered the treatment of choice for all types of sleep apnea, according to guidelines from the American Academy of Sleep Medicine.3,5,12 (Of note, for patients suffering from central sleep apnea, CPAP is typically used along with supplemental oxygen.3) CPAP therapy involves having the patient sleep with a nose or face mask connected to a mechanical device that delivers air or oxygen to the patient's nose throughout the night at a constant pressure that is greater than atmospheric pressure. The increased pressure is transferred to the pharynx, where it acts as a pneumatic splint to prevent the airway from collapsing. CPAP therapy is relatively noninvasive and often associated with a rapid response.4 Compliance--ranging from 25% to 70%--can be a major limitation with CPAP.3 Many people feel like they are suffocating when they use CPAP and complain of nasal dryness, intestinal gas, and conjunctivitis.5 Additionally, CPAP is expensive (costs of CPAP devices range from $700 to $1,000), and some of the equipment is bulky and noisy, is not easily portable, and requires electricity. 5,12 Regardless, pharmacists should encourage patients to be compliant with CPAP, because one night of noncompliance results in a complete reversal of the gains made in daytime altertness.3

More recently, bilevel positive airway pressure (BiPAP) has been used to treat sleep apnea. BiPAP uses an electronic circuit to monitor breathing and provides two different pressures, a higher one during inhalation and a lower pressure during exhalation. BiPAP is expensive, costing two to three times more than CPAP, but allows for improved patient comfort in those who require higher than average CPAP pressures and/or find breathing against increased pressure to be uncomfortable or disruptive to their sleep.10

Mandibular repositioning devices can also be used to treat obstructive sleep apnea.5,12 These devices decrease apnea by advancing the mandible 5 to 6 mm forward, moving the tongue base anteriorly and allowing for better breathing. Because these devices are less effective than CPAP in reducing apneic episodes, the American Sleep Disorders Association recommends them only for patients who cannot tolerate CPAP.12

Surgical Interventions: Surgical interventions may be necessary for patients with obstructive sleep apnea who continue to have impairment despite CPAP, behavioral modifications, and drug therapy. Such procedures are designed to bypass the obstruction or to prevent collapse of the tissue at the site of obstruction. Surgical options include uvulopalatopharyngoplasty (removal of a rim of the soft palate and the uvula), tonsillectomy (removal of the tonsils), nasal surgery (removal of nasal obstructions), and maxillomandibular advancement surgery (jaw surgery). However, few randomized clinical trials have been conducted to verify the long-term efficacy of these procedures.3,4,5,12,15

Tracheotomy is the only surgical procedure known to cure patients with severe obstructive sleep apnea. The placement of a tracheotomy tube or the creation of a more permanent skin-lined tracheotomy often results in profound symptom improvements. However, only patients with life-threatening, severe obstructive sleep apnea should have this surgery, since many risks and complications (e.g., formation of scar tissue at the opening, difficulty speaking, bleeding and infection at the site, and increased risk of lung infections) can occur as a result of the procedure.12,15

Conclusion
Sleep apnea is neither an uncommon nor benign condition. Sleep apnea can affect the very young, the very old, and everyone in between. In addition, sleep apnea can have devastating consequences--patients are more prone to accidents and other serious health conditions. Fortunately, good treatments exist, and pharmacists are available to educate patients about preventing and treating this common, but often undiagnosed, medical condition.