F irst described more than 40 years ago, serotonin syndrome remains unfamiliar to most clinicians.1 Serotonin syndrome is a potentially life-threatening adverse drug reaction resulting from excess serotonergic activity.2 It is characterized by mental, autonomic, and neuromuscular changes attributed largely to changes in serotonin sensitivity (receptor hyperstimulation) in the central and peripheral nervous systems.3 Clinical presentation includes symptoms that can be confused with diagnostic criteria for anticholinergic delirium, neuroleptic malignant syndrome (NMS), and other conditions. Mild cases of serotonin syndrome may present with restlessness or diarrhea; severe cases may present with severe muscle rigidity and hyperthermia.

Serotonin syndrome can result from a selective serotonin reuptake inhibitor (SSRI) dosage increase without titration, self-poisoning, and adjuvant therapy with another SSRI or serotonergic drug. Although SSRIs are used primarily to treat mild and major depression, they also are used to treat other disease states, such as bulimia, anorexia, obsessive-compulsive disorder, and panic disorders, thus leading to more occurrences of unintentional iatrogenic events. In 2002, out of 26,733 cases of exposure, SSRIs were responsible for 7,349 cases of toxic effects resulting in 93 deaths.4 Discontinuation of serotonergic medications is the primary treatment for patients who present with serotonin syndrome. Close monitoring of patient charts by clinical pharmacists will ensure that serotonin syndrome is minimized.

Pathophysiology
Serotonin Biosynthesis and Metabolism: Serotonin, a monoamine, is one of the major neurotransmitters used by the nervous system to transmit signals down the axon.5 When L-tryptophan is taken up by the presynaptic neuron, it is metabolized to 5-hydroxytryptophan, and then to 5-hydroxytryptamine (chemical name for serotonin; 5-HT) as the end product.2 The serotonin is then engulfed by presynaptic vesicles and stored until the neuron is stimulated.5 When the axon is stimulated, the serotonin is released from its vesicle through exocytosis and floods the synaptic cleft.2 The serotonin then stimulates the 5-HT receptors (5-HT1a, 5-HT2) and is taken up by the postsynaptic neuron (FIGURE 1).2 The unused serotonin in the synaptic cleft is taken up by the presynaptic neuron receptors and is stored in vesicles until the next axonal stimulation occurs, thus illustrating the classic negative feedback system.5 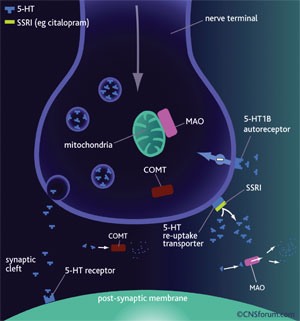 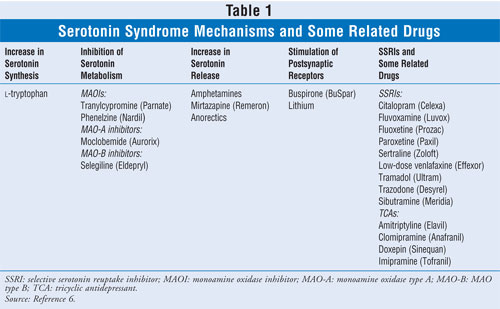 Increasing the dose of L-tryptophan will proportionally increase the amount of serotonin synthesis, resulting in an overload of serotonin vesicles, which will then flood the synaptic cleft.6 The excess serotonin released results in hypersensitivity of the postsynaptic serotonin receptors, eliciting symptoms of serotonin syndrome.

MAO and catechol-O-methyltransferase are enzymes that catalyze the degradation of serotonin to acceptable limits in the synaptic cleft.6 Therefore, when MAOIs are introduced, they inhibit the metabolism of serotonin, again resulting in an increase in serotonin concentration and hyperstimulation of the postsynaptic receptors. Although traditional MAOIs are rarely used, other medications with MAOI activity, such as linezolid, are associated with cases of serotonin syndrome.7,8

Amphetamines, mirtazapine, and anorectic-related drugs increase the amount of stored serotonin released from the presynaptic neuron, again resulting in hyperstimulation.6 Buspirone and lithium are examples of drugs that provide the fourth mechanism of serotonin syndrome by direct stimulation of postsynaptic serotonin receptors.6

SSRIs and the Mechanism of Serotonin Syndrome: Serotonergic drugs such as tricyclic antidepressants (TCAs) and SSRIs play a major role in adverse drug reactions leading to serotonin syndrome.2,6,9,10 As FIGURE 1 illustrates, SSRIs obstruct the reuptake of serotonin by blocking the presynaptic neuron receptors.2,6 An SSRI overload therefore increases the concentration of serotonin in the synaptic cleft, resulting in inhibition of the negative feedback system of serotonin and thus in symptoms of serotonin syndrome.2,6 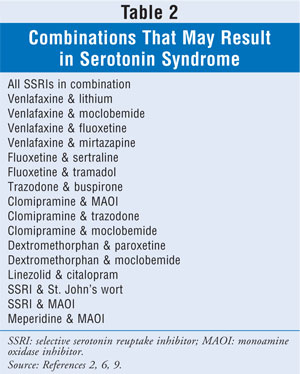 Numerous combinations of drugs (SSRIs with other SSRIs and with other serotonergic drugs) exist that may result in serotonin syndrome (TABLE 2).2,6,9 Recent data on TCAs suggest relative safety with MAOIs, whereas the SSRI/MAOI combination is clearly contraindicated.11 The wide range of drug classes that have been linked to serotonin syndrome, along with specific drug examples, is delineated in TABLE 3.12-14 Drug interactions through CYP450 2D6 (e.g., SSRIs levels increased by tricyclics) also can contribute to the toxicity.

Overdose with antidepressants has long been a problem in managing individuals with major depression. Although clinical lore suggests the relative safety of SSRIs compared with TCAs, mortality from nortriptyline was found to be similar to that from SSRIs.10 The actual incidence of serotonin syndrome is difficult to ascertain, as mild cases may not be properly diagnosed. Some form of serotonin syndrome is believed to be present in 14% to 16% of cases of SSRI overdose.4

Clinicians may not be aware of the various medications that have serotonergic effects, including antibiotics and medications for migraine, cough, nausea, and pain.15,16 Drugs of abuse such as lysergic acid diethylamide (LSD) and cocaine also have been linked to serotonin syndrome.14

Clinical Assessment
Given the heterogeneity of symptoms, mild symptoms easily can be missed or thought to be a medication side effect or to result from a nonspecific illness. For example, restlessness caused by mild serotonin syndrome may be misinterpreted as anxiety, resulting in the clinician's increasing the SSRI rather than reducing it. This is a situation similar to that when akathisia caused by antipsychotics results in a dose increase instead of a decrease. Such a mistake can aggravate a mild case of serotonin syndrome to a more severe form.

Clinical Presentation and Diagnosis: The clinical presentation of serotonin syndrome typically involves symptoms that are related to anticholinergic delirium and NMS. Some of these signs and symptoms are summarized in TABLE 4.2 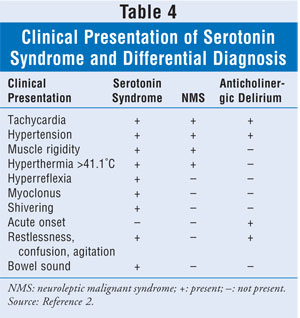 Since the patient may not be able to articulate a coherent history, it is critical to obtain from collateral sources accurate information regarding potentially ingested serotonergic medications. Recently started medications, empty bottles suggesting overdose, and evidence of illicit drug use are examples of collateral sources from which clinicians can gather information about their patients. The Hunter serotonin toxicity criteria, which include clonus, agitation, diaphoresis, tremor, hyperreflexia, hypertonicity, and hyperpyrexia as the seven key features of serotonin syndrome, were noted to be more specific and sensitive compared with Sternbach's criteria.8,17 Unfortunately, there is no consensus regarding diagnosis reported in the literature; cases of delirium from other etiologies may be included. The FDA recently instituted a warning concerning serotonin syndrome for medications that affect the serotonin system.18 A review of 29 cases of complications from the use of triptans and serotonin syndrome reported that none of the cases met Hunter or Sternbach's criteria.19 On the other hand, Gnanadesigan et al suggest that serotonin syndrome is underreported, and there have been some cases of serotonin syndrome resulting from a single dose of an SSRI.20,21

Serotonin syndrome remains a clinical diagnosis; thus, there are no diagnostic tests. Other diagnoses in the differential include NMS, malignant hyperthermia, and anticholinergic delirium (TABLE 4). NMS is an idiosyncratic response to neuroleptics resulting in lead-pipe rigidity and hyperpyrexia. NMS has been associated with nonneuroleptics such as lithium and SSRIs.22,23 Malignant hyperthermia typically is associated with exposure to inhalation anesthetics; symptoms develop intraoperatively.24 Patients have a skeletal-muscle disorder, along with a possible family history.24 Anticholinergic delirium is a toxic consequence of excess anticholinergic medications resulting in dry mouth, confusion, and constipation.17

Treatment
Treatment consists primarily of discontinuing the offending medication, which results in the rapid resolution of symptoms. Resolution may be more gradual with medications such as fluoxetine, due to their long half-life. Supportive care is the mainstay, and mild cases of serotonin syndrome can be managed on an outpatient basis. Severe cases mandate aggressive intervention, including monitoring in the ICU for seizures, hyperthermia, and tachycardia. Serotonin antagonists such as cyproheptadine may be of benefit in severe cases. Cyproheptadine improves serotonin syndrome through 5-HT2 antagonism, but it can potentially worsen anticholinergic delirium because of its anticholinergic effect.2 Benzodiazepines may be beneficial for treating agitation, seizures, and stiffness. Antipsychotics with 5-HT2A antagonism, such as olanzapine, chlorpromazine, and methysergide, may be of benefit.13 Muscular stiffness can result in the breakdown of muscular tissue, causing elevations in creatine kinase, which eventually results in renal failure and the need for dialysis.

Activated charcoal may be beneficial for the acute ingestion of serotonergic drugs.25 Some potential cases of serotonin syndrome may also involve anticholinergics. Since central nervous system medications are discontinued in both cases, it may be difficult to determine the existence of serotonin syndrome versus anticholinergic delirium. Similarly, the concomitant use of neuroleptics or recent exposure to inhalation anesthetics may cloud the picture in the differential of NMS and malignant hyperthermia. Fortunately, in all of these cases, the treatment remains essentially the same: discontinuing the offending agent and providing supportive care.2,24,26 One caveat is that bromocriptine, which may be of benefit for NMS, can worsen serotonin syndrome.27 The combination of bromocriptine and dantrolene has been associated with hyperpyrexia and death.27,28

Prevention
Awareness of the serotonergic potential of various medications is the primary method for preventing serotonin syndrome. The number of drugs that have serotonergic effects has greatly increased, with medications of assorted classes involved.29 Health care professionals may not be aware of serotonin syndrome, and of those who are aware of it, few may know the full range of drugs that can cause it. The hospital formulary committee can be an important vehicle for changing prescribing patterns by eliminating medications such as meperidine--which has particularly noxious side effects, including not only serotonin syndrome, but also its neurotoxic metabolite.30

The pharmacist plays a critical role in prevention. This role involves checking medication lists for potential toxicity and contacting prescribers when there is a potential for problems. Patients may obtain prescriptions from multiple physicians who may not be aware of other medications the patient is taking. Since serotonin syndrome is caused by a cumulative effect, clinical judgment is essential for determining when the serotonergic load is sufficient to be potentially harmful. This situation is similar to that of anticholinergic delirium, in which the problem is due to the additive effects of multiple drugs with anticholinergic mechanisms.

Conclusion
Serotonin syndrome has long been known, and it is clearly an iatrogenic effect of modern medications. Despite this, however, the increase in the number of potential offending agents may result in an increased number of cases of serotonin syndrome in the future. Awareness by and educational efforts geared toward the public and health care professionals are vital for reducing the potential number of cases and creating positive outcomes. The consultant or clinical pharmacist is a key link in the prevention and management of serotonin syndrome related to SSRIs and other medications.