Warfarin sodium (Coumadin) is one of the most widely used anticoagulants in the . It is indicated for venous thromboembolim, chronic atrial fibrillation, valvular heart disease and mechanical prosthetic heart valve.1 Warfarin is associated with hemorrhagic complications, requiring monitoring every one to four weeks.1,2

Several years ago, prothrombin time (PT) was the primary assay employed in monitoring warfarin therapy.3 PT is not widely used because of possible variability in the sensitivity of thromboplastin agents.4 Additionally, information about patients treated with anticoagulants was not interchangeable among laboratories until 1982.3 As a result, the World Health Organization (WHO) addressed the need for standardization in the late 1970s by developing a reference thromboplastin and recommending the use of international normalized ratio (INR) to monitor warfarin therapy.3,4 The INR corrects for the differences in the thromboplastin reagents through the following formula:3 INR = (PTPateint/PTControl)ISI.

International Sensitivity Index (ISI) is used to measure the responsiveness of thromboplastin when compared to the WHO reference standard.4 Since the desired INR target range for most indications is 2 to 3,3,4 warfarin dose is adjusted periodically to maintain this range.

FDA-Approved Device Developed by Roche Diagnostics and launched in 2000, CoaguChek S (Figure 1 ) is a portable monitor, affording clinicians the opportunity to test and receive results in-office and adjust the dose as needed.2 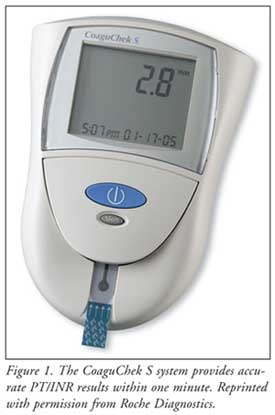 CoaguChek S has the capacity to store 60 readings, complete with both date and time. Data storage includes test cartridge code information and quality control results and allows for transfer of data to a printer or a personal computer.5 The system is powered by four AA batteries and an AC adapter.5,6 It performs PT/INR only, using a test strip containing dry rabbit brain thromboplastin. 5 Included supplies are a carry case containing a Softclix II lancing device, lancets, four AA batteries, an AC adapter, a two-minute timer (hour glass), an operational manual, and a quick reference guide.5,6

Testing Procedure CoaguChek S is easy to use, necessitating only three steps, and provides results in just one minute. First, within 15 seconds of pricking the fingertip with a lancet, a drop of blood (10 mcL) is applied to the center of the application well, which is designated by a flashing yellow area. The sample travels via capillary action to the reaction chamber where it mixes with the test strip reagent (rabbit brain thromboplastin), which contains iron particles. As soon as blood is exposed to the reaction chamber, an oscillating magnetic field causes the iron particles in the reagent to move back and forth. When a blood clot is formed, the iron particles stop moving and the time is subsequently recorded (INR). Instructions for use are provided in Table 1.1 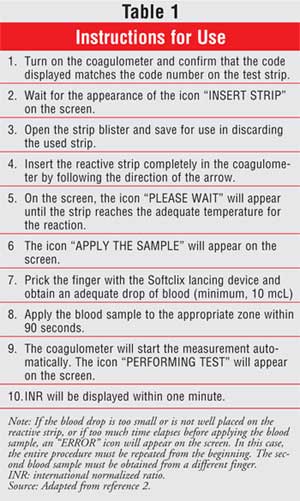 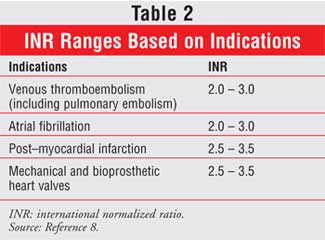 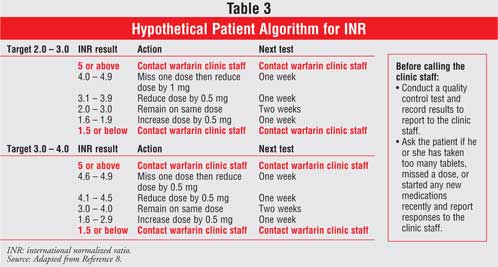 Clinical Efficacy In a study by Havrda et al., researchers evaluated the accuracy of CoaguChek S by comparing INR results from the portable monitor with results obtained by a laboratory-based method. Venous blood samples taken by standard techniques were analyzed by the MLA Electra 100 C within four hours of venipuncture. A total of 100 patients and 102 INR values from the CoaguChek S and the laboratory were included in the analysis. The CoaguChek S significantly correlated to laboratory measurements (r = 0.93), and in 25% (25/102) of patients, INR variability would have resulted in a different therapeutic recommendation. Additionally, since INR varied by only 0.5 units, 72% (18/25) of the values may have prompted a different therapeutic decision.9

The accuracy and clinical usefulness of the CoaguChek S system in rural medical practice was also examined by Jackson et al. A total of 169 patients from 15 general practice sites provided 401 paired (CoaguChek S and laboratory) INR results. The CoaguChek S INR values were significantly correlated with the laboratory INR values (r = 0.89, P <0.0001), despite complicating variables such as multiple users of the monitor and the implementation of the trial by several laboratories. Overall, 88% of dual INR measurements were within 0.5 INR units of one another. For laboratory INR <=1.9, 2.0 to 3.5, and >=3.6, 97%, 90%, and 57% of readings, respectively, were within 0.5 INR units. It is clear from the regression analysis that the CoaguChek S was most accurate when the INR was in the therapeutic range, with variability becoming prominent at INR values above 3.5. To this end, clinicians should be aware of possible value differences when INR is excessively elevated.10

Lastly, when comparing the accuracy of the CoaguChek S to the laboratory method, results from different laboratories may vary; thus, use of laboratory INR as a reference for an INR taken by a portable monitor may be problematic.11

Conclusion CoaguChek S is a convenient method to monitor a patient's INR. It provides fast, reliable, and accurate results. In addition, CoaguChek S reduces the need for frequent testing and allows for better maintenance of anticoagulation therapy.