A look at the FDA and regulation of vitamins in the United States is revealing for the pharmacist. Patients and even pharmacists may assume that some governmental agency has vast regulatory powers to control advertising and marketing of vitamins and other dietary supplements, but this is clearly not the case.

FDA Regulation (1941–1973)
The FDA established regulations in 1941 to govern labeling of vitamins, establishing a Minimum Daily Requirement for each vitamin, but the agency did not restrict the amount of a vitamin allowed in supplements at that time.1 As a result, some unscrupulous manufacturers and marketers took advantage of the situation to make outlandish claims for vitamins and other dietary supplements. In many cases, the claims included incorrect information alleging that megadoses of vitamins were safe and more effective than the normal doses. The FDA recognized the medical dangers of these claims, but was only able to move against the manufacturers and marketers on a case-by-case basis under the outdated and incomplete 1941 regulations. The unwieldy case-by-case process would have consumed far too much time and resources, given the multiplicity of offenders. Thus, the FDA realized that the solution was to establish stronger regulations that would help the agency control the burgeoning national problem.

Starting in 1962, the FDA attempted to revise the 1941 regulations to adopt the Recommended Daily Allowance (RDA), and more importantly, to restrict the amount of each vitamin in any product to 150% of the U.S. RDA, and only allowing a few combinations of vitamins to be marketed as dietary supplements.1 The FDA also attempted to require the following disclaimer on vitamin supplements: "Vitamins and minerals are supplied in abundant amounts by commonly available foods. Except for persons with special medical needs, there is no scientific basis for recommending routine use of dietary supplements." In hearings held from 1968 to 1970, the FDA was forced to withdraw the proposed disclaimer, although a majority of the proposal remained intact. Any product with more than 150% of the U.S. RDA would have required review and approval by an FDA OTC expert advisory review committee. In 1973, the proposal was finalized in the Federal Register. This move generated intense controversy.

Proxmire Amendment
The 1973 dietary supplement regulations seemed doomed from the outset and destined to never be enforced.1,2 Following the establishment of the 1973 regulations, dietary supplement manufacturers moved quickly to mobilize congressional support to invalidate the regulations altogether. Through the efforts of the manufacturers, the 1973 regulations were overturned, remanded to the FDA by legal action in 1974, and revised and reproposed by the FDA in 1975.1 During this time, Senator William Proxmire (D-Wisconsin) became the standard bearer for the supplement industry. He sponsored the 1976 Proxmire Amendment, which became section 411 of the Federal Food, Drug, and Cosmetic Act.3 It prohibited the FDA from establishing standards to limit the potency of vitamins in food supplements or regulating them as drugs based solely on their potency.4 Thus, congressional interference with the FDA virtually negated its mission of protecting the American public from dangerous doses of vitamins.3

FDA's 1976 Attempt
On October 19, 1976, the FDA issued a revised final regulation establishing standards for vitamins that conformed to the Proxmire Amendment's requirements.3 However, this was still unacceptable to the dietary supplement industry and its supporters. The regulation was vacated by the U.S. Court of Appeals (National Nutritional Foods Association v. Kennedy, 472 F. 2nd 377 [2nd Circuit 1978]), and it was remanded to the FDA for further consideration.3 The court ruled that the Proxmire Amendment had profoundly changed the FDA's authority over vitamins and that further time for public notice and comment would be needed. On March 16, 1979, the FDA published a notice in the Federal Register stating that its dietary supplement regulations were revoked.

FDA Vitamin Review Panel
In 1973, the FDA had appointed an advisory panel of experts to explore nonprescription vitamins as part of the sweeping and comprehensive FDA OTC review. On March 16, 1979, the panel published its Proposed Rule in the Federal Register.3 The rule would have allowed the FDA to assert authority over vitamins, minerals, and hematinic drug products when they were labeled with drug claims and sold as OTC products. However, that was coincidentally the same issue of the Federal Register in which the FDA revoked its own vitamin regulations. Health professionals were confused by both documents appearing on the same day, and the public was outraged. The FDA received thousands of letters protesting the 1973 Panel Report, which was misperceived as a move either to restrict vitamins to prescription status or to undermine the Proxmire Amendment. Congress became involved again, threatening the FDA with legislation to further restrict its role in vitamin regulation if the agency proceeded using the OTC review process. The FDA was unable to correct the misinterpretations and, as a result, was forced to withdraw the proposed monograph in 1981. The agency stressed that it retained the ability to take action against OTC vitamins that were unsafe or misbranded.

Tryptophan Tragedy
On November 11, 1989, the FDA warned consumers that they should discontinue taking tryptophan for the treatment of menstrual problems and sleep disorders.3 Tryptophan had never been approved by the FDA, but its use was associated with 1,510 cases (including 38 deaths) of eosinophilia, with sharp muscular pain, fatigue, fever, and rashes. The FDA took immediate action to recall the products. Eventually, the problem was discovered to be related to manufacturing processes. The tragedy led the FDA to examine the entire dietary supplement industry.

On July 29, 1993, FDA Commissioner David Kessler presented a report to the House of Representatives detailing the agency's findings.3 It noted that about 80% of the dietary supplement industry (at that time) consisted of vitamins and minerals that made no unsubstantiated claims, but the balance consisted of products that presented safety concerns (some serious and life-threatening) or made thousands of unsubstantiated claims in catalogs, brochures, and sales pitches. The agency concluded that, if the trend continued, the U.S. would return to the days of the turn-of-the-century medicine shows. The FDA's investigators visited health food stores on an undercover basis to ask if anything was available for cancer. They were sold antioxidant vitamins, germanium, ginseng, shark cartilage, red clover, Venus flytrap, bee pollen, herbal teas, lion's tooth, saw palmetto, honeysuckle, aloe vera, pancreatic enzymes, and colonic rinses. Despite its devastating findings, the FDA's well-documented report was attacked by the president of the National Nutritional Foods Association.3 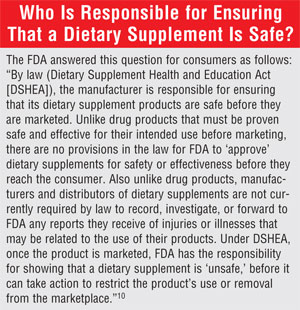 Nutrition Labeling & Education Act
On November 8, 1990, President George H.W. Bush signed into law the Nutrition Labeling and Education Act (NLEA), which required foods and dietary supplements to bear nutritional labeling.3 The FDA issued proposed rules to implement NLEA, stating that companies were making fraudulent claims, that vitamins would be held to the same standards as other medications, and that any claims would be required to withstand scientific scrutiny.3 The supplement lobby issued immediate opposition. Health food stores disseminated leaflets stating that NLEA was a disgrace and that failure to write Congress would result in the FDA removing vitamins and minerals from store shelves. The resulting letter-writing campaign flooded congressional offices.

Dietary Supplement Health & Education Act
The health food store and supplement lobbies worked assiduously to ensure that the FDA would not be able to retain any control over vitamins through the NLEA or any other method.3,5 Their driving force was Senator Orrin Hatch (R-Utah), who bore major responsibility for the resulting Dietary Supplement Health and Education Act (DSHEA) of 1994, signed into law by President Bill Clinton.3 The law was intended to permanently prevent the FDA from enforcing the NLEA in regulating dietary supplements such as vitamins. The manufacturers were not required to provide information to the FDA prior to marketing. Thus, DSHEA eliminated the FDA premarket review and approval of dietary supplements, and also removed the FDA's authority to test dietary supplements.6 As a result, the necessary controls that the FDA was legally able to exert over prescription products were completely invalidated for dietary supplements such as vitamins, minerals, herbs, botanicals, and amino acids.7

Under DSHEA, dietary supplement manufacturers were allowed to make unproven claims about the effect of the supplement on the structure or function of the body. The only notification the consumer would receive of the unproven nature of the claim(s) was the required disclaimer: "This statement has not been evaluated by the Food and Drug Administration. This product is not intended to diagnose, treat, cure, or prevent any disease."8

The FDA's Mission
The mission of the FDA includes protecting the public health by assuring the safety, efficacy, and security of human medications.9 Vitamin control would naturally fall into this mission. However, this was unacceptable to certain groups who wished to gain unprecedented power to sell unproven products without FDA oversight. Their approach to eliminating the FDA from the picture was ingenious and ultimately effective. A coalition composed of health food stores, supplement users, the supplement industry, lobbyists, and sympathetic members of Congress created a new class of products and simultaneously declared that this new class would not be subject to the mission of the FDA.

Role of the Pharmacist
In the current atmosphere, pharmacists are the last line of defense for the consumer in regard to dietary supplements. Stocking products in the pharmacy that are not known to be safe or effective is a difficult decision, and many pharmacies choose to make them available. However, when a consumer wishes to purchase a product with the disclaimer on the label, the pharmacist should discuss the fact that the product is unproven, and that no government agency is responsible for ensuring its safety and efficacy prior to its reaching store shelves. 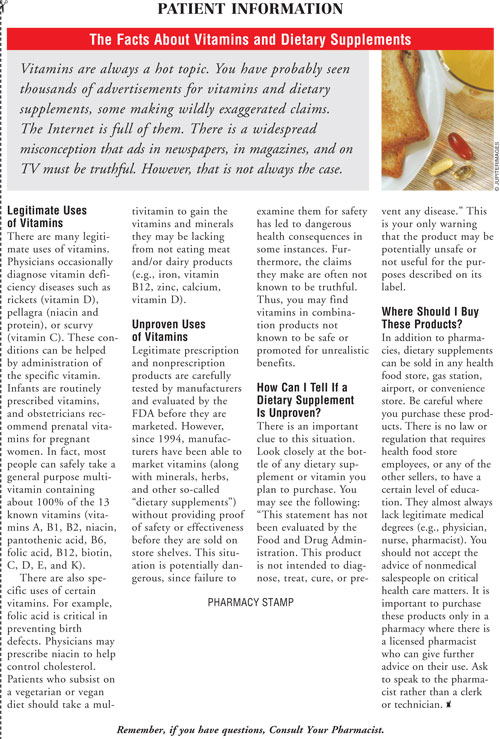