Diabetes mellitus, the fifth deadliest disease in the United States, is the result of abnormalities in protein, fat, and carbohydrate metabolism that manifest as hypergly­ cemia.1 Type I diabetes, which commonly occurs in children and young adults, is characterized by beta-cell destruction resulting in absolute insulin deficiency.2 Insulin resistance coupled with a relative lack of insulin secretion characterizes Type II diabetes. In both types, if the blood sugar is not adequately controlled, microvascular and macrovascular complications can occur.2

Glycemic control has important implications for clinical outcome in diabetes. The risk of diabetes-related complications such as blindness, amputation, and organ failure is reduced by 35% for every 1-percentage-point decrease in hemoglobin A1c (HbA1c).3 Self-monitoring of blood glucose plays a vital role in assessment of glycemic control by providing information about therapeutic efficacy and aiding in the prevention of hypoglycemia.4 Current methods for evaluating blood glucose levels include finger-stick measurements and HbA1c-detection tests. The finger-stick measurement can be inconvenient and painful, and the reading it supplies is accurate for the  moment of testing only.5 Conversely, the HbA1c test provides an average glucose level over two to three months, although results can be misleading: Hypoglycemic episodes can cause the HbA1c to appear normal even though the patient's glucose control is suboptimal. To overcome these limitations, continuous glucose monitoring (CGM) devices have been developed that can track daily trends or fluctuations, affording the opportunity for interventions. The information provided by CGM systems can help patients with diabetes achieve glycemic control, thus reducing the risk of associated complications.6,7

Continuous Glucose Monitoring
Developed by Medtronic, Inc., the Guardian REAL-Time CGM System was approved by the FDA in July 2006 (Figure 1).6 This physician-prescribed device allows patients to track fluctuations in their glucose levels, as well as the rate at which these changes occur. Patients can see how medications, exercise, diet, and lifestyle affect their glycemic control.5,7 Although these observations can serve as a guide for interventions, adjustments to therapy should not be made based solely on the information supplied by the monitor. The levels provided by the monitor indicate when the patient may need to do a confirmatory finger-stick test. Interventions should be implemented only after confirmatory measurements are obtained with a standard glucose meter. 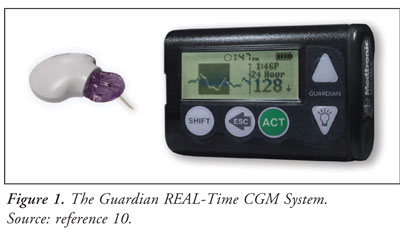 SOF-Sensor: Easy and virtually painless insertion of the sensor is achieved using the autoinsertion device, called the Sen-serter, provided with each system; manual insertion is optional, but not recommended.8-10 The patient inserts the sensor in an area with adequate subcutaneous tissue and replaces it with a new sensor every 72 hours. The new insertion site should be at least 2 inches from the previous site.8,9 Potential risks associated with sensor insertion include bleeding, swelling, irritation, and/or infection.8 The sensor measures glucose levels in the interstitial fluid through the use of two biological reagents (less than 0.4 mcg of glucose oxidase and less than 0.7 mcg of bovine serum albumin). Due to the small amount of each reagent, the risk of viral transmission and tissue reactions is minimal. After sensor insertion, five minutes should elapse before the MiniLink REAL-Time Transmitter is snapped into the sensor.

MiniLink Transmitter: The transmitter powers the sensor and collects data. Almost a third the size of earlier Medtronic transmitters, it can be easily worn under clothing. 7,8,11 A tester included with the system determines whether the transmitter is working properly.9 The transmitter has a rechargeable battery, so a MiniLink Charger is included. Recharging the battery for 20 minutes provides three days of continued use, and a full recharge provides 14 days; however, it is recommended that the battery be recharged after each use.7,10,11

The MiniLink Transmitter is designed to withstand common electromagnetic interference such as microwaves and airport security systems. However, some electronic devices that transmit in a similar frequency, such as 900-MHz cordless phones and most cellular phones, may prevent the monitor from receiving glucose data.9,11 This will not harm the Guardian System, nor will incorrect data be sent to the monitor. Interference problems can be resolved by ensuring that the transmitter and the receiving device are less than 6 feet apart and that all radiofrequency-transmitting devices are turned off.

Discreet and easy to wear, the monitor can be concealed in a pocket or under clothing.12 A watertight seal is formed when the transmitter and the sensor are connected, allowing them to be worn while bathing, showering, and even swimming to a depth of up to 8 feet for up to 30 minutes. The Guardian monitor, blue tester, and MiniLink Charger are not water-resistant and should not be immersed in water.9-11

Every five minutes, the MiniLink Transmitter wirelessly sends glucose readings to the monitor, producing 288 REAL-Time readings per day.7,9 It is recommended that an Energizer alkaline AAA battery be used to power the monitor.

Calibration and Capturing Events: Calibration of the system requires a meter blood glucose measurement two hours after insertion of a new sensor; subsequent calibrations on day 1 should occur within six and 12 hours, respectively, after initial calibration. Calibrations must be performed at least every 12 hours on days 2 and 3, but more than four calibrations per day should be avoided.9,13 The best times to calibrate are when blood glucose levels are not changing rapidly: before meals, at least two hours after a meal, and before bedtime. Daily events like noncalibration blood glucose measurements, carbohydrate consumption, exercise, and insulin injections can be entered into the Guardian REAL-Time System along with information regarding when patients take medications and when they feel ill or stressed.

CareLink Personal Therapy Management Software: The Guardian System features CareLink Personal Therapy Management software, a secure Web-based tool capable of integrating logbook, meter, and CGM data. Charts, graphs, and tables are generated that illustrate patterns and problems with glucose control ( Figure 2).7,10 The ComLink connector, which is installed on the patient's computer, allows the patient to upload data to the CareLink system. 9 Detailed reports created by this software can be shared with physicians, and this information can be incorporated into the patient's electronic medical record. This feature is not available in all locations. 7,9 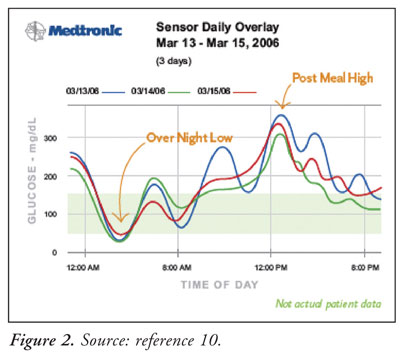 Features: Features that are unique to the Guardian REAL-Time CGM System include predictive and rate-of-change alerts and comprehensive, expanded trend graphs ( TABLE 1).7 The comprehensive trend graphs generated by the Guardian reveal glucose patterns in 3-, 6-, 12-, and 24-hour increments, allowing patients to ascertain how daily activities affect their glycemic control. Predictive alerts forewarn the patient if his or her blood glucose is approaching a critical level: Alarms can be set according to patient preference at five-minute intervals, beginning at five minutes and ending at 30 minutes.9

Sensor Accuracy: In a single-site, in-clinic study, 16 patients with Type 1 diabetes whose age ranged from 18 to 65 years and who had a mean HbA1c of 8.2% were evaluated while wearing two Guardian RT systems simultaneously. One system was calibrated approximately 3.5 times per day; the other system was calibrated an average of five times per day. Values from the Guardian RT System were compared with plasma glucose values obtained from a reference method, the YSI 2300 STAT Plus glucose analyzer.9 Guardian RT readings were taken every five minutes; YSI measurements were obtained every 30 minutes. Each YSI value was paired with the Guardian RT value that was closest in time to it. 9 A total of 3,941 paired glucose measurements were obtained. Guardian RT readings, were found, on average, to be 15 mg/dL lower than YSI readings. To evaluate the clinical implications of the difference between the YSI values and Guardian RT values, the Clarke Error Grid, which consists of a correlation plot divided into five zones, was used. Clinically acceptable values fall within Zones A and B of the Error Grid, while readings that are in Zones C, D, and E represent clinically significant errors. Of the 3,941 paired measurements, 96% of the values fell within Zone A (61.7%) and Zone B (34.4%). Agreement between YSI and Guardian RT values tended to be closer when glucose values were at mid-range, versus high or low glucose levels.

The precision of the Guardian RT values was estimated using 11,475 paired readings from the two Guardian RT systems. On average, there was a 17.2% difference between the readings generated by the two systems.

The effects of calibration frequency were evaluated by looking at the specificity and sensitivity of alarm performance. This analysis revealed that, when units were calibrated less often, specificity in the hyperglycemic range decreased from 0% to 2% and increased 2% to 4% in the hypogly­ cemic range. Less-­ frequent calibrations caused sensitivity to increase by 5% to 9% in the hypergly­ cemic range, decrease by 3% to 7% when alarms were set to between 85-100 mg/dL, and decrease by 7% to 16% when the alarms were set to 80 mg/dL or lower.

GuardControl Study: This randomized, controlled trial involved 81 pediatric patients and 81 adult patients with stable Type 1 diabetes who had an A1c level equal to or greater than 8.1% despite intensive insulin therapy with multiple daily insulin injections or continuous subcutaneous insulin infusions.14 Patients were randomized into one of three groups for three months: arm 1, which used the Guardian RT continuously; arm 2, which used the Guardian RT for three days every two weeks; and placebo, which used conventional self-monitoring of blood glucose (SMBG). Any treatment adjustments made by physicians or by patients in the placebo group were based on SMBG values; treatment adjustments made in arms 1 and 2 were based on real-time glucose profiles. Prior to taking corrective action if hypo- or hyperglycemic alarms or symptoms occurred, patients were instructed to perform confirmatory SMBG measurements. After one and three months, A1c was centrally measured. Calibration of the device was achieved by using SMBG reference values. The high glucose alert level was set at 170-250 mg/dL; after the first 10 days, the upper alarm was lowered to 200 mg/dL. The low glucose alert level was set at 50-80 mg/dL.

Significant reductions in A1c were observed with the use of the Guardian RT System (TABLE 2). At one and three months, a mean reduction in SMBG per day was seen in arm 1, but this was not statistically significant compared with arm 2 and placebo. The average daily insulin dose at 3 months was not significantly different from baseline in the three groups. Severe hypoglycemia occurred once in arm 1 and once in arm 2. The patient in arm 1 experienced hypoglycemia despite a confirmatory low SBMG and corrective carbohydrate consumption; the other patient was not wearing the device when the episode occurred. In arms 1 and 2, 82% of patients at one month and 95% at three months reported using real-time CGM information to make dietary, lifestyle, or insulin adjustments. Exact changes to patients' diabetes management were not recorded on a daily basis, so the link between improvement of glycemic control and the use of real-time CGM cannot be described in detail. 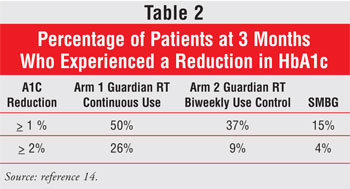 Pediatric Guardian Real-Time CGM System
Medtronic has specifically targeted the pediatric diabetic population with its recently FDA-approved pediatric model of the Guardian REAL-Time System.3,15 The pediatric model is indicated for patients 7 to 17 years of age and has a special feature: a low alert threshold that cannot be set below 90 mg/dL, allowing additional time for patients to react to hypoglycemic episodes. 3,10 The high alert threshold is set at a default of 280 mg/dL in this model.

Conclusion
The Guardian REAL-Time CGM System may benefit patients with Type 1, Type 2, or gestational diabetes; the pediatric model may help children and teenagers identify and reduce the duration of hypoglycemic episodes.3,12 Even though finger-sticks are still necessary, the Guardian REAL-Time System provides significantly more information than finger-stick measurements alone.12 Special features allow patients to track daily trends that impact glycemic control; this information can be utilized by both patients and physicians to improve treatment strategies.7 The GuardControl Study suggested that the Guardian system can help reduce HbA1c, thereby producing a significant impact on overall glucose control and diabetes-related complications.