The human body responds to injury and infection by a process called inflammation. During an inflammatory process in the body, the levels of C-reactive protein (CRP), a pro-inflammatory cytokine, rise dramatically. It has been suggested that testing CRP levels in the blood may be an additional way to assess cardiovascular disease risk. Laboratory findings from clinical and research studies also suggest that inflammation is an important factor in atherosclerosis. This is the process in which fatty deposits build up in the inner lining of arteries.1

The American Heart Association and the Centers for Disease Control and Prevention published a joint scientific statement in 2003 on the use of inflammatory markers in clinical and public health practice.2 This statement was developed after systematically reviewing the evidence of association between inflammatory markers (mainly CRP) and coronary heart disease and stroke. A more sensitive CRP test, called a high-sensitivity C-reactive protein (hs-CRP) assay, is available to determine heart disease risk more accurately.1

In 1930, Tillett and Francis originally discovered CRP as a substance in the serum of patients with acute inflammation that reacted with the C-polysaccharide of pneumococcus. Initially, it was thought that CRP might have a pathogenic role, as it was elevated in people with a variety of illnesses, but discovery of its hepatic synthesis and secretion closed that debate. Measuring and charting CRP values can prove useful in determining disease progression or the effectiveness of treatments. CRP is used mainly as a marker of inflammation.3

Various analytic methods are available for CRP determination, such as enzyme-linked immunosorbent assay (ELISA), immunoturbidimetry, rapid immunodiffusion, and visual agglutination. In general, both the CRP test and another test, called the erythrocyte sedimentation rate (ESR), measure the increase in inflammatory generated proteins. The CRP test is a direct measurement of C-reactive protein, while ESR indirectly measures many proteins associated with inflammation.1

Causes of Inflammation
There are many conditions that cause inflammation. Genetics play a role, as does the environment. Environmental factors include diet, exposure to toxins, germs, pollutants, and inhalants. Some people have a genetic predisposition to increased inflammation, which can cause them to develop an illness such as rheumatoid arthritis.4,5

Cigarette smoking, hypertension, atherogenic lipoproteins, and hyperglycemia are well-established promoting factors in atherogenesis. These risk factors give rise to a variety of noxious stimuli that cause the release of certain chemicals and the activation of cells involved in the inflammatory process. These events are thought to contribute not only to the formation of plaque but may also contribute to its disruption, resulting in the formation of a blood clot. Thus, virtually every step in atherogenesis is believed to involve substances involved in the inflammatory response and cells that are characteristic of inflammation.6

In addition, there is research that indicates that an infection--possibly one caused by a bacterium or a virus--might contribute to or even cause atherosclerosis.7 The infectious bacterium Chlamydia pneumoniae has been shown to have a role in atherosclerotic plaque. The herpes simplex virus has also been proposed as an initial inflammatory infectious agent in atherosclerosis. Viral infections tend to give a lower CRP level than bacterial infection. Bacterial infection with Helicobacter pylori is now known to be the major cause of inflammatory stomach lesions. The treatment for this condition routinely includes antibiotic therapy.

CRP and New Cardiovascular Events
Scientific studies have found that the higher the hs-CRP levels, the higher the risk of having a heart attack. In fact, the risk for heart attack in people with high hs-CRP levels has been determined to be twice that of those whose hs-CRP levels are lower. These prospective studies included men, women, and the elderly. Studies have also found an association between sudden cardiac death, peripheral arterial disease, and high hs-CRP levels. However, not all of the established cardiovascular risk factors were controlled for when the association was examined. The true independent association between hs-CRP and new cardiovascular events has yet to be established.8

CRP and Recurrent Events
A growing number of studies have examined whether high hs-CRP levels can predict recurrent cardiovascular disease, stroke, and death in different settings. High levels of hs-CRP consistently predict recurrent coronary events in patients with unstable angina and acute myocardial infarction (heart attack). Higher hs-CRP levels also are associated with lower survival rates in these patients. Many studies have suggested that after adjusting for other prognostic factors, hs-CRP is useful as a risk predictor.8

Studies also suggest that higher levels of hs-CRP may increase the risk that an artery will reclose after it has been opened by balloon angioplasty. High levels of hs-CRP in the blood also seem to predict prognosis and recurrent events in patients with stroke or peripheral arterial disease. CRP inhibition can be a safe and effective therapy for myocardial and cerebral infarctions.8

When to Measure CRP
If a person's cardiovascular risk factors (i.e., smoking, hypertension, high blood cholesterol, diabetes, being overweight or obese, physical inactivity) are low, the possibility of developing cardiovascular disease is less than 10% in 10 years, and no test is immediately warranted. If the risk factors are in the intermediate range, the possibility is 10% to 20% in 10 years, and such a test can help predict a cardiovascular or stroke event as well as help direct further evaluation and therapy. However, the benefits of therapy based on this strategy remain uncertain. A person with a high-risk score (>20% in 10 years) or established heart disease or stroke should be treated intensively regardless of hs-CRP levels.9

Diagnostic Criteria
As previously mentioned, CRP is used mainly as a marker of inflammation. Measuring and charting CRP values can prove useful in determining cardiovascular and noncardiovascular disease progress or the effectiveness of treatments. Blood samples are analyzed in a medical laboratory or at the point of testing. Patients who are scheduled for a CRP test will be asked not to eat or drink anything for 12 hours before the test.

The ranges for evaluating hs-CRP levels are given in Table 1. If, after repeated testing, patients have persistently unexplained, markedly elevated hs-CRP levels (>10.0 mg/L), they should be evaluated to exclude noncardiovascular causes. Patients with autoimmune diseases or cancer, as well as other infectious diseases, may also have elevated CRP levels.10 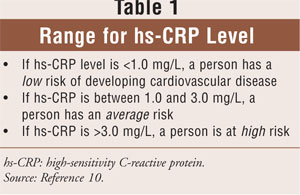 Mode of Action
The CRP gene is located on the first chromosome and is a 224-residue protein with a monomer molar mass of 25106 dalton. The protein is an annular pentameric disk in shape. Proteins with this type of configuration are known as pentraxins. CRP binds to phosphorylcholine on microbes. It is thought to assist in complement binding to foreign and damaged cells, and it enhances phagocytosis by macrophages, which express a receptor for CRP. It is also believed to play an important role in innate immunity, as an early defense system against infections.11

Arterial damage is thought to result from inflammation due to chemical insults. CRP can be used as a marker for the extent of this damage, but by itself it is not a specific prognostic indicator. Clinicians only look at the CRP values with prolonged elevation, so a single measurement would be meaningless.

In different disease states, one or two amino acids get "lopped off" CRP. It retains its activity, but these losses open it up to glycosylation, and it may have sugars such as glucose, galactose, and mannose attached to it. The patterns of glycosylation vary in different diseases, but are similar among patients who have the same disease. Previous work has shown that CRP increased the rate at which a particular parasite could invade blood cells.12 The study showed that the various CRPs had very different potencies in this regard. The authors speculate that subtyping CRP may give us more insight into heart attack mechanisms. Although the study did not demonstrate whether this glycosylation of CRP was a "good" or a "bad" thing, it offered circumstantial evidence that the differing glycosylation is part of CRP's mode of action.12

The Role of CRP in Cancer
The role of inflammation in cancer is well known. Some organs of the body show greater risk of cancer when they are chronically inflamed. Blood samples of persons with colon cancer have an average CRP concentration of 2.69 mg/L. Persons without colon cancer average 1.97 mg/L. The difference was statistically significant (P <.001).13 These findings concur with previous studies that indicated that anti-inflammatory drugs could lower colon cancer risk.14 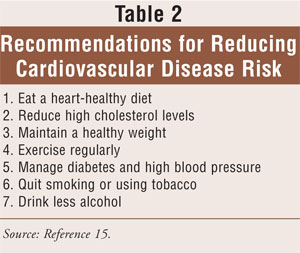 Pharmacist Recommendation
It is important for patients to make lifestyle changes to reduce their risk for cardiovascular disease, especially if the CRP level is intermediate or high (Table 2).15 For those with an elevated CRP level, taking aspirin may provide protection from cardiovascular disease. Statins, the most commonly prescribed drugs for lowering cholesterol, may also reduce CRP levels. Clinicians should prescribe the correct medications and dosage to treat the disease condition.