In 2006, the purchase of 371 billion cigarettes accounted for 90% of all money spent on tobacco products. Over the last five decades, the number of farmers producing tobacco crops has decreased by 90% to 57,000. According to the CDC, cigarette smoking incurs $75 billion in direct medical costs and $92 billion in lost productivity every year. Computed per adult smoker, $3,561 in annual health-related economic loss is being encountered--i.e., $7.18 per pack of cigarettes sold. A 10% increase in price effectively reduces the consumption of cigarettes by 3% to 5%. Various demographic characteristics of adult smokers, including level of education attained, have emerged. 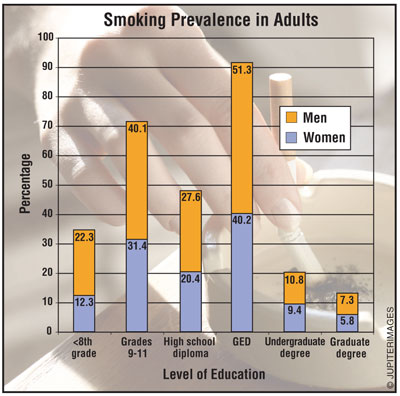 Level of Education: The highest rate of smokers (46%) occurred among adults with a general education diploma (GED). The number of male smokers outnumbered the number of female smokers by 28% in the GED group. The second highest prevalence of smoking was evidenced in the group with a ninth- to 11th-grade education, with men outnumbering women by 27%. Among the group with a 12th-grade education, however, the proportion of male to female smokers was less (20%), even though this group had the third highest prevalence rate. Smoking prevalence varied minimally between adults with a high school diploma, an associate degree, or some level of college education. In these three groups, the men continued to dominate over their female counterparts (in the range of 30% to 43%) in the rate of smoking prevalence. Having a graduate degree, an undergraduate degree, or education below the eighth-grade level demonstrated the lowest prevalence rates of smoking. Among adults with less than an eighth-grade education, 81% of smokers were men.

Ethnicity and Age: Smoking prevalence was highest among Native Americans (32.4%), followed by African Americans (23%), whites (21.9%), and Hispanics (15.2%), with Asians having the lowest prevalence (10.4%). An equal proportion (23%) of male and female high-schoolers smoked, according to the data. Among high-schoolers, 26% of smokers were white, 22% were Hispanic, and 13% were African American.

Women: Ninety percent of all lung cancer deaths are attributable to smoking, and smoking kills 178,000 women every year. Smoking prevalence was higher among women living below the poverty level (27%) compared with women living at or above the poverty level (17%). Among women, 11% of Hispanics were current smokers, as opposed to 21% of Asian Americans, 24% of whites, 27% of African Americans, and 38% of Native Americans. Eighteen percent of pregnant women aged 14 to 44 years smoked cigarettes, compared with 30% of nonpregnant women in the same age range.

Cessation: Of adult smokers, 62% of Hispanics expressed a desire to quit, as did 70% of whites, 71% of African Americans, and 69% of Asian Americans. Nationally, 19.2 million adult smokers (43% of all current smokers) quit for at least one day in an effort to stop smoking. In 2006, 45.7 million adults were former smokers, according to the CDC. One-on-one contact and persuasion by health care providers can increase the probability that cessation attempts will be successful.