Sinusitis
The paranasal sinuses are several symmetrical sets of sterile, air-filled cavities in the skull.1,2 Sinusitis is defined as inflammation in one or more of these paranasal sinuses.2,3 The sinuses are lined with cells that resemble the lining of pulmonary passages.1 Ciliated cells move in a coordinated manner to transfer materials to the small sinus drainage holes (ostia). Goblet cells produce mucus that serves to trap pollutants and infective invaders for removal. Paranasal sinus inflammation can result in inflammation of the ostia, which allows mucus to become entrapped in the sinuses, usually leading to bacterial infection.

Sinusitis (rhinosinusitis) is an increasingly common condition, affecting as many as 31 to 37 million Americans every year.4,5 Chronic sinusitis affects 32 million patients annually.5 It is responsible for 20% of office visits to allergists and immunologists.1

Acute Versus Chronic Sinusitis
Sinusitis has many potential etiologies, being induced by viral, bacterial, fungal, or allergic mechanisms; a substantial number of cases are thought to be idiopathic in nature.4 The major categories of sinusitis are acute, subacute, and chronic. Sinusitis lasting less than four weeks is acute, while cases persisting for four to 12 weeks are subacute; the condition is chronic if it extends for more than 12 weeks.1 Acute sinusitis is virtually always bacterial in origin. Infective bacteria include those that also cause acute otitis media, (e.g., Streptococcus pneumoniae, Haemophilus influenzae, and Moraxella catarrhalis).4,6-9 However, chronic sinusitis can be caused by many other etiologies.

Symptoms of Sinusitis
Symptoms of acute sinusitis include fever, headache, facial pain, cough, postnasal drainage, halitosis, fatigue, hampered smell, nasal congestion, and rhinorrhea that may involve pus or blood.1 Patients may feel pain in the teeth or ears, due to the phenomenon of referred pain. When sinusitis becomes chronic, the hallmark symptoms are purulent rhinorrhea, nasal congestion, anosmia/hyposmia, and postnasal drainage.1

Sinusitis and the Common Cold
Pharmacists field many questions about sinusitis related to the common cold. Patients typically recite symptoms of a recent common cold that have largely abated but complain of persistent sinus pain. During the cold, nasal fluids are forced into the sinuses.4 They carry viruses, bacteria, and inflammatory mediators, causing inflammation and/or infection. Goblet cells in sinuses produce mucin, which thickens mucus. Mucosal edema partially or totally occludes the ostia, leading to pressure within the sinuses, causing pain in the specific sinus(es) infected.

The Market Prior to 2004
Many products are now or have been marketed for problems related to sinus congestion. Many carry (or carried) the names of well-known product lines through the marketing tactic known as "line extensions." These products included Advil Cold & Sinus, Contac Sinus, Dristan Sinus, Motrin IB Sinus, Sudafed Sinus, Tavist Sinus, and Tylenol Allergy Sinus. There were also sinus-specific trade names (e.g., Sinutab and Sine-Off). A new FDA ruling will restrict how these products are labeled. 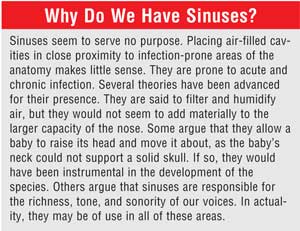 The FDA explained that the indication "For temporary relief of nasal congestion associated with sinusitis" had been one of the 13 original indications recommended by the Advisory Panel on OTC Cough, Cold, Allergy, Bronchodilator, and Antiasthmatic Drug Products in its 1976 report. The FDA explained that the panel did not provide any explanation for that indication, implying that there was no appropriate justification for the indication from its inception.

The FDA discussed the pathology of sinusitis, explaining that it is characterized by inflammation of the paranasal passages. The FDA stated that normal primary care provider/subspecialist care for acute and chronic sinusitis would include an antibiotic prescription, due to the high propensity for the condition to have a bacterial etiology.

The FDA observed that sinusitis and asthma often coexist in the same patient. Perhaps 40% to 70% of those with asthma also have sinusitis. Finally, the FDA explain­ ed that acute bacterial sinusitis may lead to rare complications culminating in blindness or death, such as infections of the orbit of the eye and/or infections of the central nervous system.

The FDA found no prospective studies proving the efficacy of decongestants in sinusitis. Even data demonstrating their efficacy as adjuncts were limited and clouded by controversy. The agency admitted that prescribers recommend them as adjunctive therapy but only within the context of a physician–patient relationship. This practice would not justify self-diagnosis or self-management of sinusitis. The FDA also discovered preclinical evidence that use of decongestants can increase the degree of sinus inflammation, having a negative effect on the resolution of sinusitis.

The FDA became concerned that current labeling may mislead consumers to believe that decongestants alone are suitable for sinusitis, rather than a physician appointment for diagnosis and treatment. A delay in seeking medical care might also delay recognition of a serious illness mimicking sinusitis. Furthermore, a bacterial infection would worsen without prompt treatment. Patients who also have asthma might have complications due to both conditions if allowed to use nonprescription products as the sole therapy.

As a result of FDA's concerns, the agency proposed in the 2004 document to remove the phrase "associated with sinusitis" from the list of FDA-approved indications. Companies would still be allowed to claim "helps decongest sinus openings and passages, temporarily relieves sinus congestion and pressure, and/or promotes nasal and/or sinus drainage."

FDA's 2005 Final Rule
FDA received positive and negative comments in response to the 2004 report and considered each comment, but in its 2005 "Amendment of Final Monograph for Over-the-Counter Nasal Decongestant Drug Products," the agency prohibited the wording, "for the temporary relief of nasal congestion associated with sinusitis," "sinusitis," and "associated with sinusitis" on all nonprescription products.11 The prohibition took effect April 11, 2007 for products with annual sales of $25,000 or more yearly. The compliance date for products with less than $25,000 annual sales is October 11, 2007.

The Impact of FDA's Ruling
The FDA action could have far-reaching consequences. If one enters sinusitis as a search term in Google, it returns 4.3 million hits. However, the search results page also includes many sponsored links. An examination of Google's sponsors reveals claims that should require FDA action.

One is for Sinus Doctor, a product containing three plant extracts claiming to give relief from sinus misery in only three minutes.12 Evidently discovered by a nonphysician "sinus researcher," it claims superiority to antibiotics, nasal sprays, decongestants, irrigation, and sinus surgery. Regarding those proven therapies, the site states, "You and I know they simply don't work." 12 The FDA-unproven herbal concoction costs $67.

A second Google sponsor is stopyeast.com. The site cleverly provides a link to a Mayo Clinic report stating that chronic rhinosinusitis may be caused by an immune reaction to nasal fungi.13 The site uses that report to discuss candidal overgrowth as a cause of sinusitis and sells FDA-unproven products known as "ThreeLac" (a "probiotic") and "Oxygen Elements Plus" (a "pat ­ ent­ ed liquid oxygenator").14,15

A third Google sponsor is colloidal-silver-colloids.com. The site includes the statement: "FDA and FTC Censorship robs the American people of health information indispensable to their exercise of freedom of choice…. The solution lies in a new law, one that will strip FDA and FTC of their censorship powers."16 The site sells Mesosilver, containing colloidal silver with claims to "clear the congestion and post nasal drip of sinus infection (sinusitis)."16 Citing lack of safety and efficacy data, FDA prohibited sales of colloidal silver in 1999.17,18 Its persistence online is puzzling. Perhaps the new ruling can help remove unknown products with unproven claims such as this one.

Another Google sponsor is AsthmaQuell, "The Natural Path to Respiratory Health."19-22 The unproven product contains echinacea and turmeric, allegedly effective for chronic allergy, asthma, lung ailments, sinus infections, severe histamine reactions, and in the reduction or elimination of colds or flu.

A final Google sponsor of interest is www.miraclesinusitiscure.com. This Web site claims to reveal how to get rid of a painful sinus infection within 24 hours using an ancient remedy.23 The site provides claims, testimonials, FAQs, and gives clear advice for ordering their Sinus Infection Miracle Cure. The site even offers a spurious observation that taking antibiotics damages the immune system. However, the site fails to reveal the name of the ingredients, a tip-off to the fact that they are not proven safe and effective in meeting any of their extravagant claims. 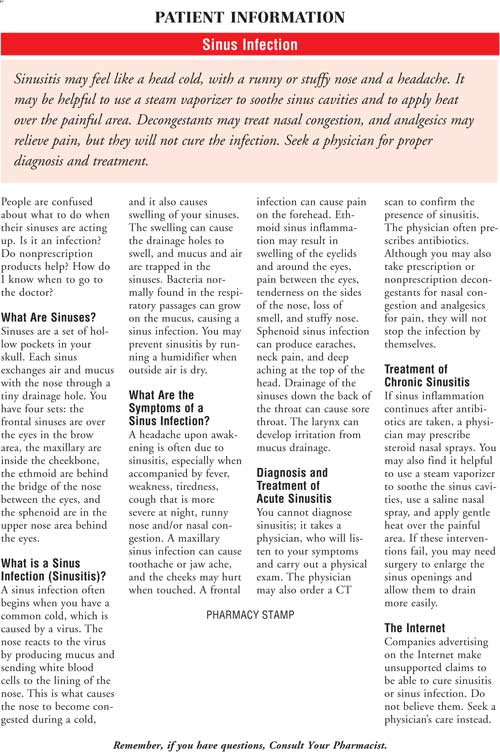