ASHP advocates and supports the professional practice of pharmacists in hospitals, health systems, ambulatory care clinics, and other settings spanning the full spectrum of medication use. This year’s 2017 meeting is held Dec 3-7 in Orlando, FL

Several awards recognizing notable leadership examples among hospital pharmacists were handed out during the Opening Session of the American Society of Health-System Pharmacists (ASHP) 52nd Midyear Clinical Meeting and Exhibition in Orlando, Florida on December 4, 2017. The ASHP is celebrating its 75th year. 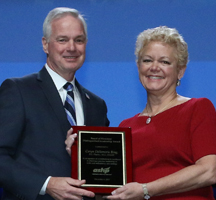 Caryn Dellamorte Bing, BS Pharm, MS, FASHP, right, received the Award for Distinguished Leadership from ASHP President Paul W. Bush, PharmD, MBA, FASHP. Established in 2001, the ASHP Award recognizes excellence in pharmacy practice leadership. A principal consultant with CB Healthcare Consulting in Las Vegas and ASHP contract surveyor for the Center for Pharmacy Practice Accreditation, Bing was honored for her sustained, progressive improvements in pharmacy services within hospitals and health systems throughout her more than 35 years of pharmacy practice and management. An active volunteer for state and national pharmacy associations, she is a past president of the Illinois and Nevada state affiliates and chaired the ASHP Task Force on Continuity of Care. She also served on the ASHP Council on Professional Affairs, as a delegate to the ASHP House of Delegates, and as director-at-large of the ASHP Section of Ambulatory Care Practitioners Medal.

Also during the ASHP Midyear Opening Session, Marianne F. Ivey, PharmD, MPH, FASHP, received ASHP's 2017 Donald E. Francke Medal, which honors individuals who have made significant contributions to international pharmacy practice. Francke, a key leader of ASHP in its formative years, was noted for his longtime service to American and international pharmacy. Ivey, professor emerita at the James L. Winkle College of Pharmacy at the University of Cincinnati, is president of the International Pharmaceutical Federation (FIP) Hospital Pharmacy Section. She has also served FIP as vice president for the Americas and was a key contributor to the FIP Global Conference on the Future of Hospital Pharmacy. Dr. Ivey is a past president of ASHP and has served as chair of the ASHP House of Delegates and as ASHP treasurer.

During the ASHP Midyear Meeting in Orlando on December 5, experts covered current regulatory issues surrounding biosimilar medications during the session, "Clinical Application and FDA Guidance on Interchangeability of Biosimilars: An Expert Panel Presentation." The presenters compared and contrasted legislative and clinical practice implications for pharmacists surrounding biosimilar use in rheumatoid arthritis and gastrointestinal disease patients, describing the core knowledge and skill requirements needed to prepare pharmacists to incorporate biosimilar use into clinical practice.

Jessica Farrell, PharmD, associate professor/clinical pharmacist, Albany College of Pharmacy and Health Sciences, Albany, New York, accentuated the potential enhanced access to treatment afforded by biosimilars due to their lower cost. She added that pharmacists are in a key position to communicate the current safety and efficacy evidence. "We are at the forefront of making sure that patients understand the differences [between biologicals and originator medications], and education is such a key point with biosimilars at this time."

Farrell stressed the importance of utilizing real-world safety and efficacy data, coupled with data from "sufficiently powered" placebo-controlled studies with robust follow-up. She added that pharmacists could play a role in documenting adverse events, strengthening the biosimilar body of knowledge. "I think it is important that patients on biosimilars are enrolled in registries," she said.

Switching data from clinical studies, she cautioned, however, should not be extrapolated, adding that automatic substitution is not recommended at this time but may be a reality soon in certain states. Farrell also highlighted the challenge of treating certain patient populations with biosimilars, such as pediatrics and pregnancy, due to a lack of current safety evidence. "These are the tough, tough, patient cases that we, as pharmacists, are going to have to help our providers answer."

Dohm said the FDA is "Currently considering our policies on compounding and repackaging of drugs in the hospital and health system setting." Among the proposed rules she cited is the agency's "Hospital and Health System Compounding Draft Guidance," which permits hospitals to keep a supply of compounded medications on hand for emergency, time-sensitive use without a patient-specific prescription.

Addressing the safety of compounded drugs, including the widely publicized fungal meningitis outbreak of 2012, Dohm said, "We continue to observe problematic conditions during our inspections of compounding facilities, and we continue to receive reports of adverse events associated with compounded drugs." Outsourcing facilities that supply compounded drugs with or without receiving patient-specific prescriptions, she pointed out, are subject to GMP and also to "routine, risk-based oversight." The FDA is also posting product reports online, she added.

In a session also presented on December 5 titled, "Nonmedical Use of Prescription Opioids by Adolescents and Young Adults: Strategies for Pharmacists," experts explained how to assess an adolescent or young adult patient using appropriate screening tools for opioid misuse or opioid use disorder; develop a treatment approach for detoxification and medication-assisted recovery; provide caregiver training on naloxone administration; and recommend school- and home-based opioid misuse prevention strategies.

Medications for treatment of opioid misuse disorder, he stressed, are safe and effective, dramatically reducing the risk of deaths from overdose. Nevertheless, Bratberg lamented, they are "significantly underutilized."

"Results from the 2017 ASHP National Survey: The Current State of Pharmacy Practice in Hospitals" examined the responses from the latest poll of hospital pharmacists. The session, presented on December 6, described how the ASHP National Survey results identify significant practice trends while delineating the practice trends that deviate from established best practices.

Key survey takeaways include the finding that hospital antimicrobial stewardship programs are common and pharmacists are usually in a leadership role. The survey also revealed that pharmacies are actively utilizing strategies to detect and prevent controlled-substance diversion, although best practices are not universally used. Also, pharmacists and pharmacy technician staffing levels remain strong, the survey found, despite the use of automation and technology in dispensing. Finally, levels of training and certification continue to rise.

According to presenter Douglas Scheckelhoff, MS, FASHP, the ASHP is about in the middle of completing a standardization project, called the Standardize 4 Safety Initiative. Designed to standardize medication concentrations to reduce errors and improve transitions of care, Scheckelhoff said that 12% of hospitals are already implementing the initiative.