Long before there were antibiotics, researchers envisioned using viruses to seek out and destroy bacteria. Now, as organisms continue to develop resistance to existing antibiotics, these viruses, called bacteriophages, are finding new advocates. According to the FDA, bacteriophages (or phages) are defined as RNA or DNA viruses that infect bacteria without infecting mammalian or plant cells. Phages are ubiquitous in the environment, and humans are routinely exposed to them at high levels through food and water without adverse effects. The FDA has approved one product, a Listeria-specific bacteriophage preparation made from six individually purified phages to be used on ready-to-eat meat and dairy products, as an antimicrobial agent.1 The product, a food additive, is reported to be effective against 170 strains of Listeria monocytogenes. Other phages have been approved in the United States as pesticides.

Although not currently permitted here, phages are used abroad (e.g., in Eastern Europe, the former Soviet Union) as antibiotic therapy. Phages may eventually become the treatment of choice in the U.S. for cases where antibiotics fail, but there are a host of problems to be solved before that happens. This article will review the history of phage discovery, biology, medical uses, advantages and disadvantages, and the likely future of phage therapy.

History
A paper written by Frederick Twort and published in 1915 is generally considered the beginning of phage research, although there are earlier reports that suggest their presence.2 Twort was attempting to grow vaccinia virus on agar media in the absence of living cells when he noted that some colonies of contaminating micrococci appeared mucoid, watery, or glassy. This glassy transformation could be induced in other colonies by inoculation of the fresh colony with material from the watery colony. When he examined the glassy colonies under a microscope, he noted that the bacteria had degenerated into small granules. His interpretation of glassy transformation was tentative, but he concluded that the agent responsible might almost be considered as an acute infectious disease of micrococci.3

Although he may not have been first to publish, Felix d'Herelle is generally credited as the scientist most intimately involved in phage research and its medical application.4 The discovery or rediscovery of phages by d'Herelle is associated with an outbreak of severe hemorrhagic dysentery among French troops stationed on the outskirts of Paris in 1915. Several soldiers were hospitalized, and d'Herelle was assigned to conduct an investigation of the outbreak. During these studies, he made bacteria-free filtrates of the patients' fecal samples and mixed and incubated them with Shigella strains isolated from the patients. A portion of the mixtures was inoculated into experimental animals and a portion was spread on agar medium to observe the growth of the bacteria. It was on these agar cultures that d'Herelle observed the appearance of small, clear areas, which he initially called taches, and later plaques.5 His findings were presented during the September 1917 meeting of the Academy of Sciences, and they were subsequently published in the meeting's proceedings.6 D'Herelle had little doubt about the nature of the phenomenon, and he proposed that it was caused by a virus capable of parasitizing bacteria. He also proposed the name bacteriophage on October 18, 1916.7 The name was formed from bacteria and phagein (Greek, "to eat or devour") to imply that phages consume or destroy bacteria.

Biology
As mentioned earlier, phages are DNA or RNA viruses that infect only specific bacteria. They have colorful names such as T4, Mu, Qﬂ, P1, or CTXØ. Bacterial phages come in many shapes and sizes (e.g., tailed or nontailed, icosahedral, filamentous, and enveloped or nonenveloped). The tailed, double-stranded DNA phages began evolving over three billion years ago, but only in recent years has science begun to understand the genetic mechanisms behind that evolution and the role they play in the evolution of their bacterial hosts. It has also become clear that not only are tailed phages remarkably abundant in the environment, but they also probably constitute a numerical majority of organisms on the planet.8 Estimates of the total population are on the order of 1031 total viral particles, an astronomical number: 1031 tailed phages laid end to end would extend into space to a distance of 200 million light years. Estimates of the longevity of phages in the environment suggest that the entire population turns over every few days.9

Phages can assume many different lifestyles--lytic or temperate. Lytic phages infect a bacterium and immediately begin replicating, destroying the cell a short time later.9 Temperate phages can arm a bacterium with an additional poisonous gene and turn it into a lethal weapon.4 They also integrate their DNA into the bacterial chromosome, leading to a state of lysogeny. (A phage in the lysogenic state is called a prophage.) Certain prophages can alter the phenotype of the host bacterium. If the prophage expresses a toxin gene, then the bacterium will be lysogenically converted for toxin production. For example, the virulence of Vibrio cholerae is largely dependent on infection by the bacteriophage CTXØ, in that the cholera toxin is encoded within the genome of this temperate and nonlytic filamentous phage, and only strains of vibrio infected by CTXØ are capable of causing epidemic disease.9

Most phages have double-stranded DNAs encapsulated into an icosahedral shell of protein attached to a tail. At the end of the tail there are proteins that attach to cells. A simple explanation is as follows: the virus particle with its protein and DNA first lands on the outside of the specific bacterial cell and injects its DNA into the cell. The DNA of the bacterial virus then takes over the cell, converting the cell into a virus factory. The bacterial cell dies, and hundreds of virus particles are released. The process, of course, is much more complex, consisting of a cascade of events involving several structural and regulatory genes.

Medical Uses
Not long after his discovery, d'Herelle used phages to treat dysentery. The studies were conducted in Paris in 1919. The phage preparation was ingested by d'Herelle, the treating physician, and several hospital interns to confirm its safety before administering it to patients.7 The successful results of these studies, however, were not immediately published, and therefore the first reported application of phages to treat infectious diseases of humans came from Bruynoghe and Maisin in France in 1921. They used phages to treat staphylococcal skin disease.10

Several promising studies followed, and encouraged by these early results, d'Herelle used various phage preparations to treat thousands of patients having cholera and/or bubonic plague in India. D'Herelle also owned a commercial laboratory in Paris that produced several phage preparations against various bacterial infections. In the early 1930s, at least four major manufacturers in the U.S. manufactured and sold phage products, including Parke Davis, E. R. Squibb and Sons, Swan-Myers of Abbott Laboratories, and Eli Lilly. All four suppliers focused primarily on staphylococci phages, which were administered to treat furuncles, carbuncles, and boils.4 As late as the 1940s, Eli Lilly was producing seven phage products for human use, including preparations targeted against staphylococci, streptococci, E. coli, and other bacterial pathogens. These preparations consisted of phage-lysed, bacteriologically sterile broth cultures of the targeted bacteria, or the same preparations in a water-soluble jelly base. The products were used to treat various infections, including abscesses, suppurating wounds, vaginitis, acute and chronic infections of the upper respiratory tract, and mastoid infections.7 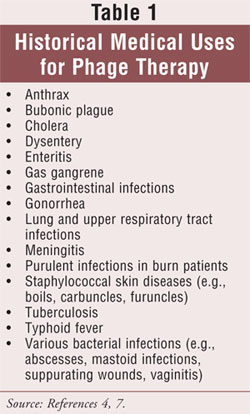 Advantages and Disadvantages of Phage Therapy
The discovery of viruses that can infect and destroy bacteria was greeted with considerable optimism in the early 1900s. Despite the efforts of a number of investigators, their use was generally abandoned soon after the introduction of antibiotics in the 1940s.11 Lytic phages, of course, are similar to antibiotics in that they have remarkable antibacterial activity, and their theoretical advantages are good reasons for renewed interest. Earlier reported results using phages might have been better if it had been recognized that there are many types of phages and that each is specific for a special host range of bacteria. This misconception resulted in phages that were effective against one bacterial host being applied to clinical infections caused by other bacterial strains, against which these phages had little, if any, effect.11

Phages have a number of advantages compared to antibiotics (TABLE 2). For one, phages are very specific; they usually affect only the targeted bacterial species. Antibiotics target both pathogenic microorganisms and normal microflora. This affects the microbial balance in the patient, which may lead to a serious secondary infection. Second, phages replicate at the site of infection and are available where they are most needed. Antibiotics are metabolized and eliminated from the body and do not concentrate at the site of infection. Third, phages are found throughout nature, and it is easy to find new phages when bacteria become resistant to them. This means that selecting new phages is a relatively rapid process that can be accomplished in days or weeks, whereas developing a new antibiotic is a time-consuming process that can take several years.7 Evolution drives the rapid emergence of new phages that can destroy bacteria that have become resistant; i.e., there should be an inexhaustible supply.4 Fourth, phages appear to be safe, as no serious adverse effects have been described. Minor adverse effects, however, have been reported due to the liberation of endotoxins from bacteria lysed in vivo by phages.12,13 Such effects may also be observed when antibiotics are used.14 During the long history of phage usage in Eastern Europe and the former Soviet Union, there have been virtually no reports of serious complications.7 Phages have been administered orally (tablets or liquid), rectally, intravenously, locally, and in tampons, rinses, creams, and aerosols. Fifth, and most important, phages are active against bacteria that have become resistant to antibiotics. 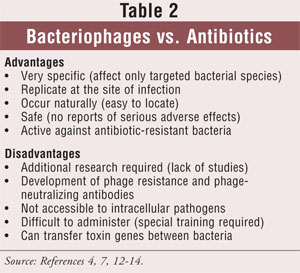 Phage therapy is not without disadvantages (TABLE 2). There are no internationally recognized studies that attest to the efficacy of phages in human patients. There are a number of publications on phage therapy, but very few papers in which the pharmacokinetics of therapeutic phage preparations is delineated.7 Additional research would be needed to obtain the type of pharmacologic and toxicologic data required by the FDA. There is a paucity of appropriately conducted, placebo-controlled studies. Because of the high specificity of phages, many negative results may have been obtained because of failure to select phages lytic for the targeted bacterial species. Another concern regarding the therapeutic use of phages is that the development of phage resistance may hamper their effectiveness. Because bacteria are under constant threat of infection by phages, there are strong selective pressures to acquire resistance. The development of phage-neutralizing antibodies is another possible disadvantage, which may hamper phage effectiveness. It is also unclear how effective phages would be in treating diseases caused by intracellular pathogens (e.g., Salmonella species), where bacteria multiply primarily inside human cells and are not accessible to phages. Phages are more difficult to administer than antibiotics, and a physician needs special training in order to correctly prescribe and use phages. It must also be remembered that phages are complex organisms than can transfer toxin genes between bacteria.4

The Future
The potential for treating infectious diseases with phages has been pursued since their discovery, but for the reasons outlined here, phage therapy is not accepted in Western medicine. There still remain many important questions that must be addressed before lytic phages can be endorsed for therapeutic use. Currently, the FDA would have a problem approving mixtures of phages, and the agency has yet to publish guidelines for approving phage drugs. FDA scientists have indicated concern about phages changing during the course of manufacture, as mutations in phage genes can have unexpected effects. However, with the continuing threat of antibiotic resistance, it is time to reconsider developing phage therapy to the point where it can be useful in modern clinical practice.15 There is a sufficient body of data to build on and a desperate need for an alternative treatment against emerging antibiotic-resistant bacteria.