According to the CDC's 2003 mortality statistics, the top two causes of death--heart diseases and cancers--accounted for 51% of all deaths, compared with 59% in 1980. Stroke has ranked third since the 1950s, despite an overall decline in the proportion of deaths due to this cause. Chronic lower respiratory diseases (CLRDs) and accidents/unintentional injuries ranked fourth and fifth, respectively; the proportion of deaths due to CLRDs has increased over time, while that due to accidents/unintentional injuries declined during the 1980s, hovered around 4% in the 1990s, and has incrementally increased since 2001. In 2003, the top five causes of death accounted for about 67% of all deaths, while the top 10, which also included diabetes, influenza/pneumonia, Alzheimer's disease, nephritis, and septicemia, accounted for 78%. 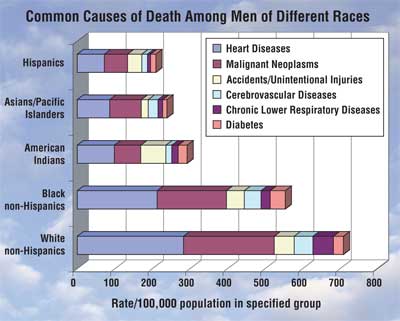 Gender Differences: Over time, men have experienced a decline in the proportion of deaths due to heart diseases. Since the 1980s, men have persistently had a higher relative burden of cancer mortality than women despite an identical ranking in both groups. Diabetes and kidney disease also have identical rankings--sixth and ninth, respectively--between men and women, although women have a higher burden of mortality.