In the United States, the most common types of cancer are those affecting the skin, and most skin cancers occur in the elderly population.1,2 More than one million new cases of skin cancer are diagnosed in the U.S. every year.3 Epidemiologic data correlates the incidence of epidermal tumors with degree of pigmentary protection, implicating ultraviolet (UV) light as important in their etiology. 1 A bright sky, sand, and snow enhance exposure to sunburn-producing ultraviolet A (UVA) and ultraviolet B (UVB) rays. While these rays are filtered out by glass, smoke, and smog, they may pass through fog, light clouds or clear, shallow water.2 Individuals with light skin, hair, and eyes (e.g., blue, green, gray), and those who easily sunburn and do not tan, are particularly susceptible to the effects of UV light. Dark-skinned individuals (e.g., of African decent) are also susceptible and may even sunburn if intense or prolonged exposure occurs; however, they are less likely to develop skin cancer.

Sun exposure causes the immunologically important epidermal Langerhan's cells to be inactivated and lost. Further effects of sun exposure include thickening of the epidermis and an increased production of melanin, a pigment produced by melanocytes that is responsible for tanning of the skin and some natural protection against future exposure.2 Environmental damage to the skin is associated with several neoplastic conditions commonly seen in the elderly, including actinic keratosis, Bowen's disease, squamous cell carcinoma, and basal cell carcinoma.1

Pharmacists can raise awareness by providing information and education to seniors and their caregivers regarding which individuals are at risk for skin cancer and how excessive sun exposure, over time, not only has the potential to cause wrinkles and an aged complexion, but can cause severe photosensitivity reactions and skin cancer as well.4 In an attempt to contribute to the prevention of an avoidable cancer, pharmacists, through consultation efforts, should encourage patients to continue to protect the skin from excessive sun exposure and request an annual skin examination from their physician.

Chronic Effects of Excessive Sun Exposure Aging Skin: Elderly individuals whose specific lifestyle or skin pigmentation protects them from excessive sun exposure and damage often appear younger-looking than their chronological age.5Over many years, exposure to sunlight contributes to a rough, blotchy, and wrinkled skin appearance.6 Some geriatric skin conditions, such as skin cancer, occur almost exclusively in extrinsically aged skin. While discussion of the variety of medical and surgical options for the treatment of photoaged skin (e.g., cutaneous atrophy, leathery rough, mottled hyperpigmentation, wrinkles) is beyond the scope of this article, it is important to note that senior patients deciding on elective cosmetic or plastic surgery should be screened thoroughly for cardiovascular, pulmonary, and renal diseases that may raise the risk of surgical complications.5 Furthermore, healing time in seniors may be longer for surgery and dermatologic procedures (e.g., chemical peels, dermabrasion) compared to younger patients.5

Precancers and Early Cancers: Precancers and early stage cancers (referred to as cancer in situ) may be associated with the later development of squamous cell carcinoma. They include actinic keratosis, actinic chelitis, leukoplakia, and Bowen's disease. Most dermatologists subscribe to the belief that Bowen's disease is another name for a form of superficial squamous cell carcinoma (i.e., intraepidermal) that has not yet spread. Bowen's disease may resemble eczema or psoriasis, and presents clinically as a persistent, scaly red-brown patch predomimently affecting the elderly.3,5

Actinic keratosis is considered a premalignant lesion often seen in individuals who have spent time outdoors exposed to the sun. Seniors who have spent many years overexposed to UV light due to outdoor leisure activities or occupations and fair-skinned, light-eyed individuals are particularly susceptible to epidermal damage. Actinic keratoses manifest as single or multiple sandpaper-like patches, varying in color (e.g., skin-colored to reddish-brown or yellowish-black), with a scaly and erythematous appearance that are hard and sharp on palpation. Lesions are well-defined, usually painless to slightly tender, and emerge on areas exposed to the sun including the face, ears, and back of hands or forearms.

Actinic keratosis may evolve into a squamous cell carcinoma, which, when detected in its early stages, is almost always curable as these lesions usually grow very slowly and rarely metastasize.5, 7 If the diagnosis is questionable, a skin biopsy is warranted since tumors that are not treated promptly may result in the loss of an eye, ear, or nose. Individuals with actinic keratosis are at high risk for developing other forms of skin cancer as well.5 Treatment for actinic keratosis may be attempted by two different modalities: 1) destroying the lesion using a surgical procedure; and 2) medication therapy. The medical therapy approach has the advantage of accomplishing treatment of a large area with multiple lesions, while disadvantages include lengthy courses of treatment that may be accompanied by skin irritation and discomfort.8 At present, there are four medications approved by the FDA for the treatment of actinic keratosis: topical 5-fluorouracil, 5% imiquimod cream, topical diclofenac gel, and photodynamic therapy with topical delta-aminolevulinic acid.8

Cancer of the Skin: Most cancers of the skin manifest in sun-exposed areas of the body, and the association between sun exposure and skin neoplasms is well established (TABLE 1). 9 The increase in recreational sun exposure has paralleled the steadily increased incidence in melanoma and nonmelanomatous skin cancers.10 Awareness and screenings for early diagnosis are important since most skin cancers are curable if treated early.2 A change in the skin's appearance is the earliest sign of skin cancer. This may include a red or reddish-brown area of skin; a lump that appears smooth, shiny or waxy; or an area with a scaly or rough surface.6 Additionally, the appearance of a new mole or change in an existing one, or a rash or sore that does not heal, are also early warning signs of skin cancer. Pharmacists should refer individuals with any of these situations to a physician for an evaluation, which usually involves a biopsy of the area in question. 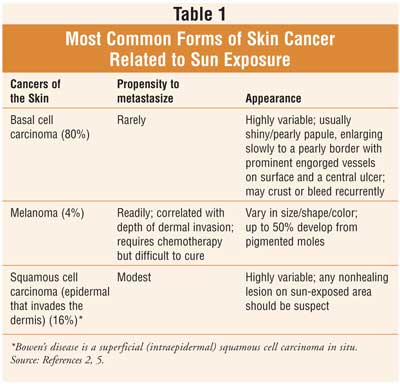 Basal Cell Carcinoma Basal cell carcinoma is the most common skin cancer, with more than 400,000 new cases estimated in the U.S. each year; approximately 95% of cases occur in people between the ages of 40 and 79 years.2,3,5 An abnormal growth of the basal cells that line the deepest layer of the epidermis is referred to as a basal cell carcinoma.3 It rarely occurs in dark-skinned individuals and is seen most commonly in those with light skin who have been sun-exposed. Diagnosis is by biopsy, and while metastases are rare, local tissue growth may cause much destruction by invading surrounding tissue. The size, site, histologic subtype, and clinical appearance of the nodule or papule determine the treatment. A variety of treatment options exist including Mohs surgery, a microscopically controlled procedure that progressively excises tissue borders and inspects specimens during the surgery by microscopic examination until the area is tumor-free.2

Most squamous cell carcinomas are localized, and early identification and treatment avoids the risk of disfigurement.3 While metastases to vital organs are rare, they are often fatal; metastases usually appear on the lips, mucous membranes or an area of the skin where chronic inflammation exists. Treatment includes surgical excision, cryotherapy, and radiotherapy.

Melanoma Melanomas are rarely seen in dark-skinned individuals and family history (i.e., first-degree relative) of melanoma increases risk. The incidence of melanoma increases with age and continues to rise through the eighth decade of life; the mean age at diagnosis is 67 years.5 Up to half of melanomas occur from pigmented moles, and lesions may also occur on oral and genital mucosa, as well as the conjunctiva.2 The cure rate of melanoma is highly dependent on an early diagnosis and early treatment as prognosis is always related to the thickness of the tumor at the time of initial excision rather than histologic type.2,5 Although metastatic melanoma requires chemotherapy, it is difficult to cure.2 Among elderly men, morbidity rates are particularly high, probably due to a delay in diagnosis.5

Acute Effects of Sun Exposure Sunburn: When it comes to the development of skin cancer, both a sunburn and suntan are undesirable.11 The intensity of the burn or tan, and ultimately the extent of skin damage, is based on the dose of UV radiation absorbed by the skin. A sunburn reaction harms epidermal and dermal cells while a suntan causes cumulative damage to epidermal and dermal cells, and increases the risk of skin cancer over time.11

Photosensitivity Associated with Medications: Chemical photosensitivity is a cutaneous reaction to sunlight and may be subcategorized into phototoxic reactions and photoallergic reactions.2 Phototoxic-causing agents (e.g., topical perfumes and coal tar) and orally ingested agents (e.g., tetracyclines and psoralen-containing plants) potentiate solar energy, causing a nonimmunologic reaction that appears as sunburn (erythema, pain, and sometimes blistering) approximately 30 minutes to several hours after exposure and seems to be dose-dependent.2,12

Less common are photoallergic reactions, which are immunologic in nature and therefore may result in a delay in onset of eruption from the initial exposure.12 Photoallergic-causing agents include sulfonamides, sunscreens, and aftershave lotions.2 Symptoms include erythema, pruritus, and sometimes vesicles (papulovesicular eczematous dermatitis) occurring one to 14 days after exposure. While photoallergic reactions may extend to nonsun-exposed areas of the body, phototoxic reactions do not.2 Tanning booths and photosensitizing chemicals in cosmetics and drugs have made photosensitivity reactions more commonplace.12 In general, topical corticosteroids and avoidance of the offending substance is the recommended treatment for photosensitivity reactions.2 For both types of reactions, avoiding sun exposure is paramount and use of sunscreens that block UVA and UVB are recommended.12

Protection from Sun Exposure Pharmacists have a role in educating about and advocating for protection from sun exposure that might contribute to general sunburn, medication-related photosensitivity reactions, and skin cancer. Minimizing sun exposure through sunscreen/sunblock application to sun-exposed areas of the body can usually prevent skin cancers. Recommendations would include routinely and consistently applying sunscreens with a high skin protection factor (SPF-15 or greater) to all exposed areas of the skin 30 minutes before exposure to the sun; reapplication approximately every two hours and after swimming, exercising, and perspiring is suggested. Common sunscreens absorb UVB rays (e.g., aminobenzoates [including p-aminobenzoic acid or PABA, salicylates, cinamates, benzophenones, and the anthrilates]). Benzophenones also effectively screen UVA rays, while zinc oxide and titanium dioxide block both UVB and UVA rays.2

Sunscreens do help protect against sunburn; they do not, however, always prevent sunburn and chronic sun damage. Additional measures in conjunction with the application of sunscreen is recommended, such as the use of long-sleeved shirts, long pants, and wide-brimmed hats.6 In general, all individuals should self-examine their skin approximately every three to four months and have any changes examined by a physician. It is recommended that seniors, however, have all areas of their skin checked annually by a physician.6

Summary Several neoplastic conditions commonly seen in the elderly are associated with environmental damage to the skin. Most cancers of the skin manifest in sun-exposed areas of the body, and the association between sun exposure and skin neoplasms is well established. A pharmacist's recommendation and guidance in the proper use of sunscreen may positively impact health care outcomes as sunscreen failure is a common occurrence and is usually attributed to insufficient application, late application or failure to reapply sunscreen after activities that remove it. Since skin cancer is the most common type of cancer in the U.S., there is an important role for pharmacists in raising awareness about skin cancer and the need for sun exposure protection, referral for assessment for changes in the skin's appearance, and the avoidance of medication-related photosensitivity reactions. Furthermore, since most skin cancers are cured with early treatment, annual screenings are recommended to facilitate early diagnosis and intervention. 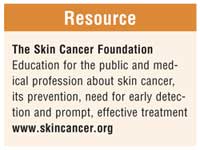