Visualizing organs of the gastrointestinal (GI) tract, such as the liver and gallbladder, and detecting cysts, abscesses, tumors, and obstructions can be achieved through radiographic imaging.1 Contrast agents, used during a computed tomography procedure, for example, can illuminate specific hollow structures and vascularity of the GI tract.1 A coronary angiography, also known as cardiac catheterization, can detect blockages through radiographic visualization of coronary vessels subsequent to an injection of radiopaque contrast medium (CM).2,3 Iodinated contrast media (TABLE 1), used for the identification of vascular structures, are relied upon continually in radiologic and cardiologic procedures.4 Contrast-induced nephropathy (CIN) is an increasingly important complication associated with the use of iodinated CM.4 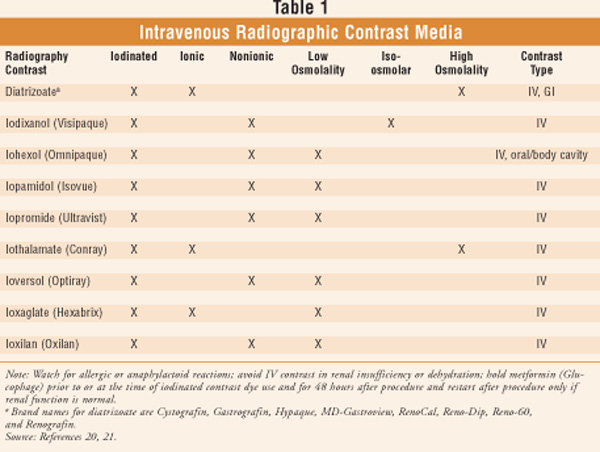 Diagnostic imaging procedures that require intravenous radiographic CM have increased in number and have resulted in an increase in CIN.5 CIN is considered a common complication in angiographic procedures.6,7 This is an important issue for clinicians, including pharmacists who provide services for the elderly, since among aging individuals there is an increased incidence of renal impairment and diabetes, two of the risk factors (TABLE 2) for CIN.8,9 CIN is one of the most serious adverse events associated with the use of CM and is the third leading cause of hospital-acquired acute renal failure.10,11 It has been reported that individuals who develop CIN have increased morbidity, higher rates of mortality, lengthy hospital stays, and poor long-term outcomes.10 Choosing a particular CM is dependent upon patient and procedural factors, current evidence, and guidelines.8 Researchers indicate that chances of developing CIN can be reduced by employing appropriate prevention strategies.10 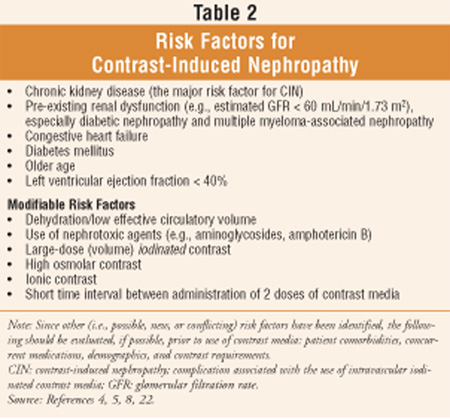 Common Definitions of Contrast-Induced Nephropathy
While the incidence of CIN has been reported to vary widely, the true incidence of this condition has been difficult to determine since there is no single definition of CIN.8,12 The most common definition of CIN used in clinical trials is: Increase in baseline serum creatinine (SCr) of 0.5 mg/dL or 25% increase from baseline at 48 hours post CM usage.8,13 Other definitions include: Increase in baseline SCr of > 0.5 mg/dL or > 25% within 72 hours post CM usage excluding alternative reasons and Increase in baseline SCr of† >= 0.3 mg/dL, or an increase in SCr 50%, or oliguria (< 0.5 mL/kg/hour for > 6 hours).8,14,15 When CIN is suspected, other causes of renal insufficiency should be considered in the differential diagnosis, such as dehydration, interstitial nephritis, and cholesterol embolism.8

Pathophysiology
While changes in the function of the aging kidney are highly variable and not always inevitable, a decline in glomerular filtration rate (GFR)is masked in seniors since a proportional decline in muscle mass renders the serum creatinine to remain generally constant.16 When this consideration is not acknowledged, it may result in inappropriate dosing of medications with associated morbidity.16 Since even a subtle increase in serum creatinine in seniors can signify a significant decline in renal function, renal pathology may not be immediately recognized in a geriatric patient.16

The pathophysiology of nephropathy secondary to contrast media is complex since its development is multifactorial.8 A recent literature review proposed a simplified sequence of events: When contrast media is administered in a subject with impaired renal function (estimated GFR < 60 mL/min/1.73 m2), an initial increase in renal blood flow occurs due to vasoconstrictors (e.g., endothelin, adenosine); this is followed by a decrease in blood flow, which allows the contrast media to be pointedly nephrotoxic.8,13,17 Additionally, with the compromise of nitric oxide (a protective vasodilator) production and the potential release of reactive oxygen species, further renal injury may ensue.8,17-19 Research continues to identify patients at risk for and measures to prevent CIN.8

Factors Increasing Risk
In an attempt to reduce the chance of CIN, risk factors (TABLE 2) should be identified. Among others, they include chronic kidney disease, older age, dehydration, diabetes mellitus, congestive heart failure, and use of concurrent nephrotoxic medication (including aminoglycosides and amphotericin B).5,10

CM Drug Interaction with Metformin
Contrast agents may increase the risk of metformin-induced lactic acidosis. Additionally, due to the potential for acute alteration in renal function, metformin should be temporarily discontinued for 48 hours in patients undergoing radiologic studies involving IV administration of iodinated contrast media.20 Glucophage should be restarted after the procedure only if renal function is normal.21

Measures for Prevention of CIN
Currently, there is no effective treatment for CIN.12 Researchers have noted that although risk factors for CIN have been identified, an effective prophylaxis strategy has not been developed for CIN due to a poor understanding of the pathophysiology and the clinical significance of this condition.22

Among the categories of developed strategies for the prevention of CIN (i.e., volume expansion before, during, and after contrast media administration; pharmacological strategies to prevent reduction of renal perfusion, reduction of tubular flow, and direct tubular toxicity; renal replacement therapy; and selection of contrast media), volume expansion is the most critical measure for reducing CIN and should be used in all individuals undergoing procedures requiring CM.12 Research has revealed a general consensus that hydration protocols implemented before and after imaging with CM may prevent CIN.9 Unfortunately, definitive and convincing data have not established amounts to be infused, infusion timing, and type of solutions (i.e., half-isotonic, isotonic saline solution, or bicarbonate).9 An extensive Medline search indicates it is believed that prevention is actually achieved through the correction of hypovolemia, dehydration, or both.9 In addition to the utilization of hydration, use of low volumes of iso-osmolar or low-osmolar contrast in those patients at risk of developing CIN has been recommended.6,22

While the use of N-acetylcysteine or ascorbic acid has been suggested as possibly valuable in very high-risk patients, no consensus exists to date regarding the efficacy of N-acetylcysteine for CIN prevention.8,22 Randomized trials have provided evidence that interventions such as theophylline, bicarbonate, and ascorbic acid were appropriate in the emergency department setting and did decrease the risk of CIN.11

The recommendation to obtain serum creatinine levels prior to the procedure among patients with renal disease, diabetes, proteinuria, hypertension, gout, or congestive heart failure is supported by practice guidelines.22 While beyond the scope of this article, a list of organizational guidelines and recommendations regarding the prevention and monitoring of CIN, including the American College of Radiology and two consensus panels, can be found in Reference 8. Researchers have called for future research to focus on correctly identifying higher risk patients and studying therapies as part of large, well-designed clinical trials.7,22

Conclusion
The wide use of diagnostic imaging with IV iodinated CM places an ever increasing number of patients in contact with a renally toxic agent with potential for adverse outcomes, especially those at risk, such as geriatric patients. CIN is associated with significant economic and clinical consequences, including prolonged hospitalization and a higher rate of mortality. While it is believed that prevention is actually achieved through the correction of hypovolemia, dehydration, or both, further research involving large clinical trials is warranted to test and develop prevention protocols.