Strains, sprains, and other musculoskeletal problems are extremely common. Summer is a peak time for these injuries, as people have more time to engage in recreational pursuits. However, winter carries its own unique risks for injury. Snow-shoveling, icy conditions leading to falls, and sports such as ice-skating, skiing, and snowboarding all can produce musculoskeletal and tendon injury.

Prevalence
The number of U.S. citizens engaging in skiing or snowboarding is estimated at 13 million, with 13% to 27% of skiers being children.1,2 The number of snowboarders, who make up more than 40% of this group, has risen rapidly in the last two decades.1,3 Ski resorts report growing attendance over the past decade, boosting the overall number of injuries.4 The aggregate number of ski-resort visits is 57 to 60 million.1,5 The rate of skiing-related injury is estimated to be 3 to 4 injuries per 1,000 skier-days. 6 Half of all injuries suffered at ski resorts are due to snowboarding. 6 The rate of injury among elite snowboarders is estimated at 0.8 per 1,000 snowboarding hours.7 An estimated 100,000 to 140,000 nonfatal skiing and snowboarding accidents require emergency-room treatment each year. 1,5

Epidemiology
Several epidemiological trends help predict who isÜ more likely to be injured during winter sports and which type of injury is most likely to occur. Novice snowboarders are the most likely to be injured.8 The initial three hours are the most injury-prone period for snowboarding. Injuries in beginners are more commonly fractures; more experienced snowboarders suffer more hand, elbow, and shoulder injuries, and their injuries are more severe.8,9 In one study of skiing and snowboarding injuries, gender was predictive of injury.10 Males suffered 81% of skiing injuries and 86% of snowboarding injuries; this makes sense, as males predominate among snowboarders.11 Children under 16 years of age suffer more than 180,000 skiing injuries yearly, at an injury rate of 3.92 to 9.1 per 1,000 ski days.2

Skiing Injuries
Skiers on open slopes can attain speeds of 25 to 30 miles per hour. Alpine skiers are prone to lower-limb injuries, the knee being the major target.6,12 At least 35% of all injuries are knee-related.6 The most common type of knee injury is medial collateral ligamentous damage.6

Snowboarding Injuries
The number of snowboarders has grown rapidly as the sport has gained in popularity.7 This rapid growth has meant a greater number of novice snowboarders and a consequent rise in the injuries common in newcomers to most high-risk sports. Compared with skiers, snowboarders are at greater risk for upper-limb injuries. 8 Injuries in novices are far more likely than in skiers. When compared with a group of skiers without regard to skill level, first-time snowboarders had a three- to fourfold greater likelihood of experiencing fractures, concussions with loss of consciousness, dislocations, and loss of teeth. 7,8 Knee injuries account for an additional 3% to 23% of snowboarding injuries, and back and chest injuries constitute 2% to 16%.7 Twenty percent of injuries involve the wrist, an injury particularly common among beginners.7

The Pharmacist's Role
The pharmacist may be the first health professional consulted about winter injuries. Refer any patient whose injury or situation lies outside the labeling of nonprescription products and devices to a physician. For patients whose injuries are suitable for self-care, several types of products may provide relief.

Cryotherapy: The pharmacist can suggest cryotherapy for acute injuries such as strains and sprains. Cryotherapy is useful during the first 24 to 48 hours following injury.13 Its efficacy drops 48 to 72 hours postinjury. Cold inhibits or decreases histamine, neutrophil activation, collagenase activity, and synovial leukocytes. The net effectÜ is to limit the extent of inflammation within injured ligaments. Limiting the extent of inflammation allows injured tissues to return to normal function more rapidly. Also, cryotherapy lowers tissue metabolism, reducing the extent of hypoxia-induced secondary-tissue damage. Cryotherapy has a vital place in RICE therapy (the use of rest, ice, compression, and elevation for an acutely injured area). It is useful for injuries of the ankle, knee, and tendons, as well as strains and sprains. It also can be used during injury rehabilitation to facilitate therapeutic exercise. 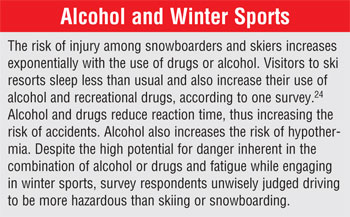 The two most common cryotherapy devices are single-use chemical-reaction pouches and reusable cryogel packs.13 The single-use pouch is a flexible plastic bag that contains two chemicals that come into contact only when the bag is squeezed. This action ruptures an inner plastic membrane, allowing the two chemicals to mix, a cryogenic reaction. The resulting cold is not sustained, but the product can be utilized while the patient is being transported to a care facility. The product must be discarded after its single use.

The reusable pack is a plastic, cryogel-filled container that can be kept in the refrigerator (not the freezer) until needed. These packs retain cold longer than single-use products. Their flexibility allows them to conform to the site of injury.

The pharmacist should advise the patient to remove the cryotherapy product when the skin feels numb or after 20 minutes of application, whichever occurs first.13 Cryotherapy is not safe for patients suffering from Raynaud's disease!= Ü or from cold-induced allergy.

Analgesics: Patients also may use internal and/or external analgesics for their winter injuries. In discussing these products, the pharmacist should inform the patient of the various precautions surrounding their use. Patients under two years of age should not be given analgesics.13 Generally, pain that has persisted for more than seven days despite the use of counterirritants or 10 days despite the use of internal analgesics requires referral. All other contraindications and precautions on these products' labels must be followed closely. Internal analgesics range from acetaminophen (e.g., Tylenol) and salicylates (single-entity products or in various combinations) to ibuprofen (e.g., Advil) and naproxen (e.g., Aleve). External analgesics/counterirritants include a few single-entity products and various combinations of methyl salicylate, camphor, and menthol (e.g., Mineral Ice, Heet) and miscellaneous, lesser-used ingredients. Products containing trolamine (triethanol!= amine salicylate) have not yet been proven effective and should be avoided.

While external analgesics are safe in most cases, patients must be urged to adhere to dosing instructions. In one well-publicized fatality, a 17-year-old cross-country runner apparently applied a methyl salicylateñcontaining cream to her legs between meets; she reportedly also was using two other products containing methyl salicylate. 14-23 Upon autopsy, elevated, toxic blood levels of salicylate were found. One report stated that the girl's levels were six times higher than those judged to be safe. A broadcast implied that the girl may have been overusing tired muscles rather than taking rest times. Johnson & Johnson, the manufacturer of BENGAY, apologized to the girl's family even though no specific product was implicated. This tragic incident points up the importance of reading and heeding all instructions on all nonprescription products and devices.Ü It is critically important that consumers purchase these products from a pharmacy, where a trained professional can advise them on self-care.

Thermotherapy: Thermotherapy is a vital component of care for many winter injuries. These include nonacute overuse syndromes arising from prolonged snow-shoveling, as well as acute injuries that have passed the 48-to-72ñhour mark.13 Thermotherapy also is helpful in injury rehabilitation. Heat reduces pain by neutralizing noxious stimuli and increasing removal of cellular waste products and debris, such as metabolites and lactic acid. It also makes muscles and tendons more flexible by increasing the elasticity of collagen. Thus, judiciously applied local heat helps relieve pain, soreness, and stiffness in the subacute phases of an injury.

Thermotherapy products found in pharmacies fall into two categories. One of them is variable-temperature products, which cannot maintain a stable temperature by virtue of their mechanism. These products include hot-water bottles, clay or gel packs, and heating pads. The first two types slowly cool after application and need to be refilled with hot water or remicrowaved. In the case of heating pads, a thermostat controls wattage, so that the temperature rises to a certain level, falls, and rises again in a continual cycle of varying heat delivery.13 Burns are possible at the highest range of heating-pad temperatures. The optimal temperature for delivery of effective thermotherapy lies in the range of 104?F to 113.9?F. Burns can occur at 114.8?F, although this depends on duration of exposure. The risk of burns increases if the patient lies or sits on the variable-temperature product; in both cases, heat can be trapped between the patient and the bed or chair, allowing it to rise to harmful levels.

When the patient asks about variable-temperature thermotherapy products, the pharmacist should stress the dangers of using them in conjunction with external analgesics. Placing methyl salicylate, camphor, or menthol-containing external analgesics on the painful area increases superficial blood flow to the area. Should the patient subsequently place a variable-temperature product such as a heating pad on the medicated area, the heat delivered to the site cannot be redistributed via blood flow. This increases the risk of burns. One patient with deep necrosis resulting from this practice required one year of hospitalization with debridement and grafting.13

The second category of thermotherapy products sold in pharmacies is the type that maintains a stable temperature. At present, only one product falls into this category: the therapeutic heat wrap (e.g., ThermaCare). Opening the package exposes the heat wrap to oxygen, allowing it to reach a stable temperature of 104?F within about 30 minutes.13 This temperature is equivalent to that of a fever and would not be expected to cause burns in the average patient. The therapeutic heat wrap maintains this safe temperature for its maximum wearing time of 8 hours. 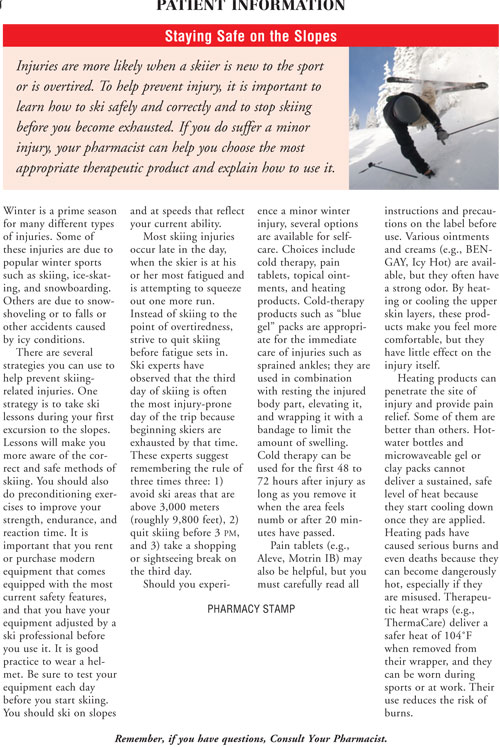