A mong all adverse reactions to medications, 6% to 10% are allergic in nature. 1 Of the wide variety of allergic drug reactions, the most frequently recognized and reported manifest dermatologically.1,2 Cutaneous adverse reactions have been reported in 2.7% of hospitalized patients.1,3 And while serious dermatologic drugñinduced reactions are estimated to occur in only 1.9 cases per million people per year, they can be associated with a mortality rate as high as 40%.1,4,5 Most dermatologic reactions are generally mild and will resolve quickly after the discontinuation of the offending drug. Others, however, can progress into serious or life-threatening conditions.1 The drug-induced reactions considered most dangerous because of their association with significant morbidity and mortality include erythema multiforme major (Stevens-Johnson syndrome [SJS]), toxic epidermal necrolysis (TEN), exfoliative dermatitis, and anaphylaxis.6

Etiology
While causes of SJS include a variety of drugs (TABLE 1), infections (viral, bacterial, fungal, protozoal), and malignancies (e.g., various carcinomas, lymphomas), up to 50% of cases have no identified etiology.7 More than 50% of patients with SJS report a recent upper respiratory tract infection.8 In adults and the elderly, drugs and malignancies are the etiologies most often implicated; infections most often cause SJS in pediatric patients.7 Most SJS reactions induced by anticonvulsants occur in the first 60 days of therapy.9 Exposure to corticosteroids has been associated with an increased rate of SJS occurrence.10 SJS occurs predominately in Caucasians; there is a male-to-female ratio of 2:1 and a propensity for the reaction to manifest in the early spring and winter.7 SJS can occur at any age; however, most patients are in the second to fourth decade of their lives. Cases have been reported in children as young as 3 months.7

Pathophysiology
While certain categories of drug reactions involve immunologic mechanisms, there may also be underlying nonimmunologic mechanisms involved (e.g., dose relationship).6 The most frequent of all cutaneous drug reactions are exanthem-like (macular and papular) eruptions.6 The drugs most commonly responsible for exanthematous eruptions include penicillins, cephalosporins, sulfonamides, carbamazepine, phenytoin, allopurinol, and gold.6

Symptoms, Signs, and Diagnosis
Erythema multiforme is an acute inflammatory syndrome characterized initially by a macropapular eruption that may progress to irregular lesions with a central clearing, referred to as target or iris skin lesions.11 The rash appears mostly on the extremities (e.g., hands, palms, wrists, forearms, feet, elbows, knees) and may be accompanied by bullous lesions that break down into erosions.1 The more extensive syndrome, referred to as erythema multiforme major or SJS, is characterized by a spread to more areas of the body and particularly involves the mucous membranes. SJS is usually associated with fever and extensive purpura.1 In the course of the illness, the significant involvement of mucous membranes includes nasal, ocular, oral, gastrointestinal (GI), lower respiratory tract, urethral, and vaginal.1,7 Diagnosis of SJS is clinical, and a dermatologist is the clinician most often making the determination of SJS, with or without biopsy.7 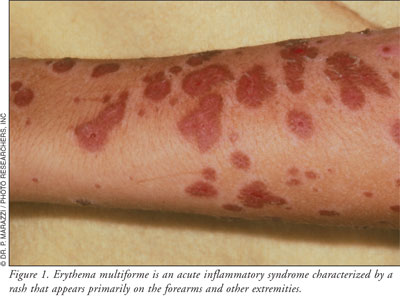 Separation of the epidermis from the dermis may progress to sloughing of significant areas of the skin that is attributable to pathologic cell death; some have also linked inflammatory cytokines to the pathogenesis.7 Sloughing resembles third-degree burns, and at this stage the condition is referred to as TEN .1 Progression to necrosis may occur with GI and respiratory mucous membrane involvement as well.7 There is a simple classification used to describe the relationship of SJS to TEN: SJS may be considered a mild form of TEN, with less than 10% body surface area (BSA) detachment; overlapping SJS-TEN presents with detachment of 10% to 30% BSA; and the diagnosis of TEN is used when detachment reaches more than 30% BSA. 12

Treatment, Prognosis, and Prevention
While topical steroids are an appropriate outpatient treatment for individuals with erythema multiforme minor, patients with erythema multiforme major must be hospitalized.7 Furthermore, due to the seriousness of the condition, the facility should have critical care capabilities in the event they are necessary. Management typically consists of discontinuing the offending drug and administering symptomatic therapy until the reaction has resolved.6 There is no treatment specifically for SJS.7 Severe reactions may require treatment in a burn center.6 While consultation with an ophthalmologist is mandatory for the treatment of patients with ocular involvement, consultation with other organ specialists (e.g., pulmonologists, gastroenterologists, nephrologists) may be appropriate in some cases.7

Saline compresses can be applied to the eyelids, lips, and nose.7 Antimicrobials are indicated in cases of cutaneous or urinary tract infections, as either may result in bacteremia; the prophylactic use of systemic antibiotics is not useful, particularly because of the risk of resistance to multiple drugs. 7 While systemic corticosteroids may be useful early in the reaction to prevent visceral involvement and reduce intensity and duration, their overall use in patients with SJS has been associated with an increase in morbidity and mortality, rendering their utility controversial to date.7,10 Intravenous immunoglobulins and cyclosporine have also been used as treatments for SJS.8

Unless a secondary infection occurs, lesions usually heal within one to two weeks and most patients recover from SJS without sequelae.7 The development of complications ( TABLE 2) will ultimately determine prognosis; up to 15% of SJS cases result in death.7 Mortality associated with TEN can reach as high as 30%.1 Because there is the potential for recurrences, patients must avoid any future exposure to the agents that were implicated in the manifestation of SJS.7 Prophylactic treatment with human intravenous immunoglobulin for recurrent SJS has been described in the literature.7,13 Patients with skin conditions that are potentially drug-induced should be evaluated by pharmacists and primary care providers using an organized and thorough approach.8 Based on an understanding of the mechanisms involved in adverse drug reactions, this process should begin with a comprehensive medication history and documentation of episodes of all medication allergies.8 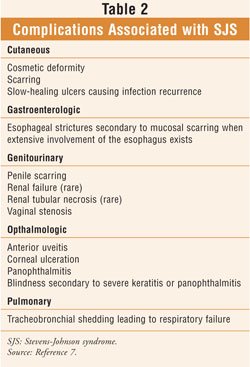 Conclusion
There is a potential risk of adverse events in response to the administration of any drug, and cutaneous reactions may span a spectrum ranging from mild, self-limiting occurrences to severe and life-threatening eruptions. Stevens-Johnson syndrome, an immune complexñmediated hypersensitivity disorder, is one of the most dangerous conditions that can be induced by a drug. Associated with significant morbidity and mortality, SJS should be well understood by pharmacists who can assist in its recognition and prevention.