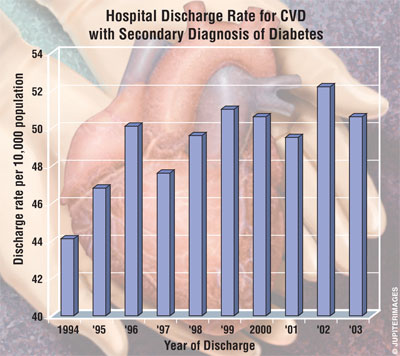 Hospitalizations
The decline in CVD prevalence among adults with diabetes is consistent with the trend in the rate for CVD hospitalizations among diabetic adults; the aging of the population had little effect. From 1980 to 2003, the length of stay of hospital discharges with CVD as primary diagnosis and diabetes as secondary diagnosis dropped from 12.2 days to 4.4 days across all groups. The drop in CVD prevalence in diabetic adults might be a result of decreasing rates of some CVD risk factors (e.g., high total cholesterol, high blood pressure, smoking), use of statins, or increasing use of preventive treatments (e.g., aspirin therapy).

Rates of CVD as first-listed diagnosis per 1,000 diabetics increased for both whites and blacks in the 1980s, leveling off in the early 1990s. Until 2003, rates for blacks showed little change and rates for whites decreased. In 2003, the rate for whites was similar to the 1980 rate; the rate for blacks was 61% higher. Prevalence of CVD decreased by 25.3% among blacks; no significant decrease occurred among whites. Among non-Hispanics, the rate decreased from 37.9% in 1997 to 33.3% in 2005. No trends were detected for Hispanics, however.

Comments
Continued interventions (e.g., control of blood lipids, blood pressure, and blood glucose) are needed to reduce modifiable risk factors, better control diabetes, and decrease CVD prevalence in adults with diabetes. The Centers for Disease Control and Prevention provides resources for diabetes prevention and programs including diabetes education, improvements in and monitoring of diabetes care, and promotion of early detection of diabetes complications.